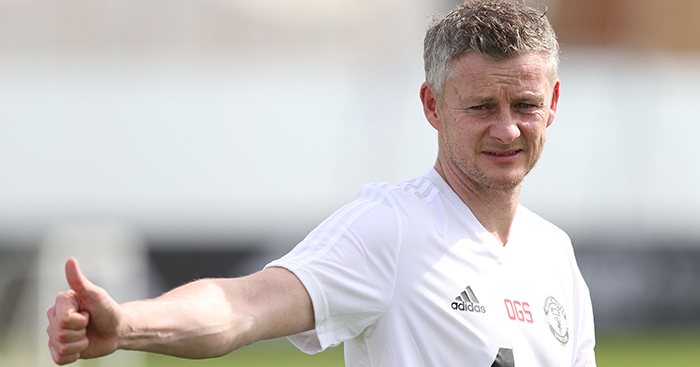 Manchester United’s transformation under Ole Gunnar Solskjaer from meaningless sludge to rip-roaring mega club has made an absolute mockery of Jose Mourinho’s management.

The players reportedly want Solskjaer to get the job full-time, and why not?

Sure, they haven’t played a top side yet and sure, Solskjaer hasn’t had time to actually implement and tactics, but after five wins on the bounce we don’t think it’s any exaggeration to say that nothing will ever go wrong should he remain at Old Trafford forever.

The only question is why didn’t Ed Woodward pull the trigger sooner? What would have happened if Mourinho had been inexplicably sacked at the end of last season and Solskjaer inexplicably parachuted in to replace him?

Hindsight is 20-20, of course, and we’ve decided to use our perfect vision to deride the United board for being so stupid.

We used the Football Manager 2019 Data Editor to rip up Mourinho’s contract in June 2018 and hand the reins – full-time – to Solskjaer, before simulating a save for three seasons to find out if Solskjaer really is the new Special One Chosen One Special Chosen One.

Year One: 4th and UCL semis

The shadow of Mourinho looms oddly large over Old Trafford. Sacked despite finishing second – pre-empting a collapse – gives Mourinho apologists ammunition to romanticise his two years at the club, to lament the demise of a man who was on the verge of something truly special.

The result is a team hesitantly continuing the work of their predecessor, Solskjaer too timid to impose a new philosophy when the old one was just about to come good. United finish the season having won the most headers, picked up the most yellow cards, and scored the most set-piece goals.

But performances are steady. United are only five points off the top at the halfway stage, recovering from a 3-0 home defeat to Liverpool on the opening day – “that’s what happens when you get rid of an experienced manager and replace him with a novice” – to grind their way to a respectable third.

Sadly they cannot sustain form past January and go on to collect just 17 points from 12 league matches between February and March. It’s as if there comes a point at which players start to lose interest in such a rudimentary style of football. Who knew? 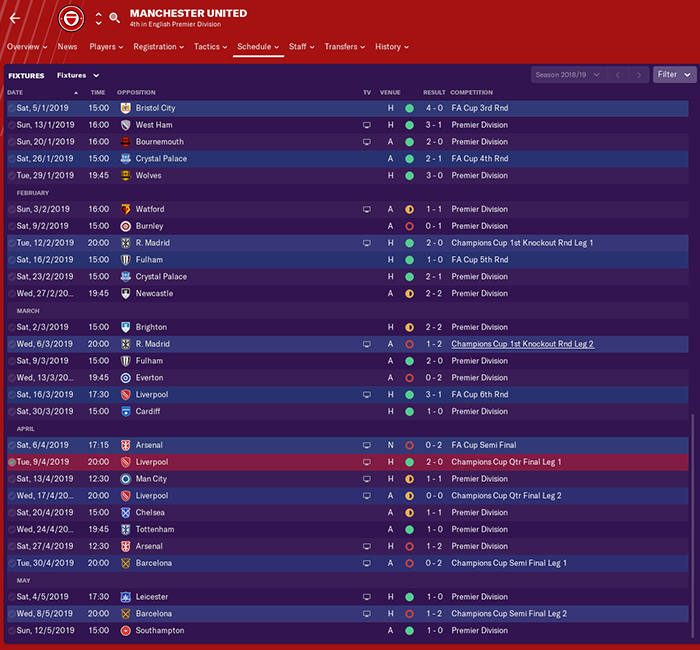 As domestic results worsen, United inevitably turn their attention to the Champions League. They beat Real Madrid 2-0 at home in the first leg of the second round, and then Romelu Lukaku scores in the fifth minute at the Bernabeu to seal the tie (they lose the game 2-1).

Another Mourinho-esque, gritted-teeth display brings another 2-0 home win, and then a 0-0 draw away, in the quarter-final, this time against Liverpool.

Sadly, Barcelona win 2-0 and 2-1 in the semis, two forgettable matches for United fans that prove, yes, Real are rubbish and they got lucky against Liverpool. 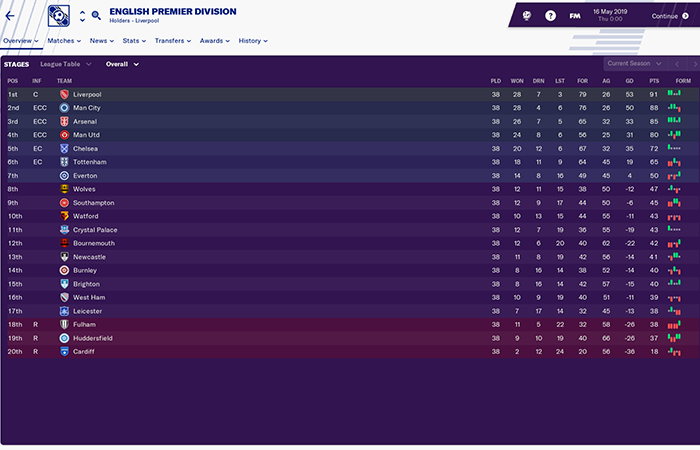 It’s time for Solskjaer to stamp his authority on this team or slink away. That’s what everyone’s saying. Stop being Mourinho-lite and bring some character, some spark, to this team.

He doesn’t disappoint, spending £263million in the summer on a host of dazzling attacking talent including Alex Grimaldo, Patrik Schick, and, er, Lucas Leiva.

The spree is funded mostly by £20million sales of players like Fred and Juan Mata – a proper clear-out – but United fans are sad to see Marcus Rashford jump ship to Chelsea for £73million. 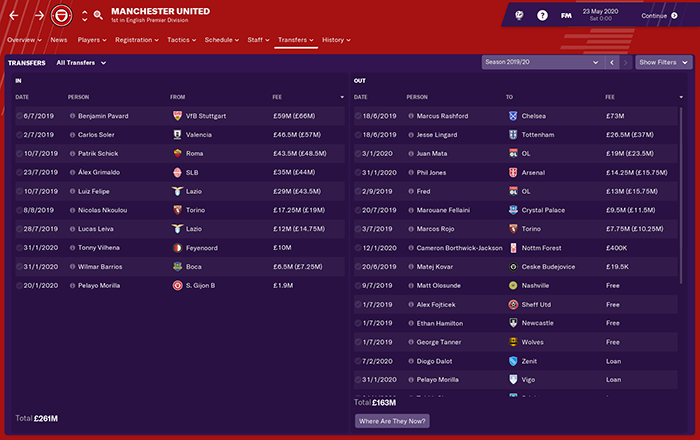 It would prove to be the most productive summer in the club’s history. United don’t lose a league game until December, and thanks to a new-look defence starring Luiz Felipe keep 12 clean sheets from the first 19 matches.

This time they accelerate through February and March rather than collapse, scoring 17 goals in seven league games in these two months. By April the title looks set to be won at a canter until defeat to Man City – sandwiched between two Barcelona matches that end in Champions League elimination – brings a serious wobble.

The league title is technically sewn up in the penultimate round of fixtures when a Paul Pogba brace beats Spurs 2-1, but really the title race ended a week earlier.

United travelled to Liverpool for the early kick-off three points ahead of Arsenal, who played West Ham at the London Stadium later that day. Liverpool fans were sure they’d end their rivals’ hopes. Instead, Solskjaer masterminded a famous 2-1 win.

Well, actually, Fabinho was sent off after seven minutes and it took a dodgy penalty to break the deadlock. But history won’t remember the details. Solskjaer’s a genius and all is well. 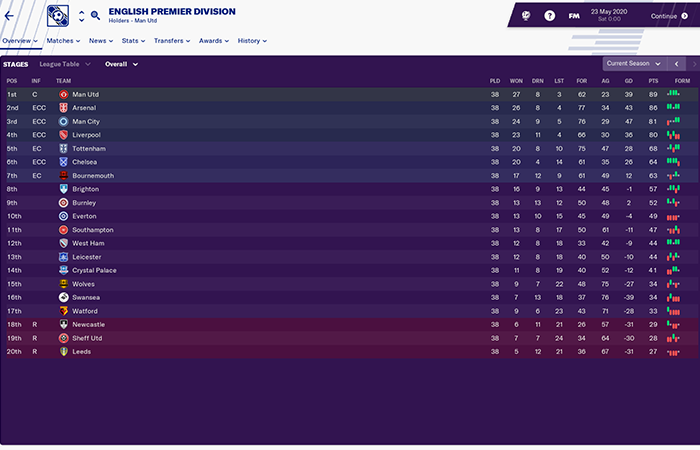 FM19 really has a flair for narrative. Solskjaer has a ‘Mourinho season’, the club collapse into fresh existential crisis, and United haters up and down the land rejoice. Football can be so poetic, or at least a virtual simulation of it can be.

The 2020-21 season starts badly, is bad in the middle, then ends badly. In the summer, David de Gea leaves on a free and is replaced by the error-prone Keylor Navas, thus destroying the defensive solidity that formed the foundation of their title win, before a further £160million is spent disastrously. Joao Cancelo, Kevin Volland and William Carvalho are particularly bad. 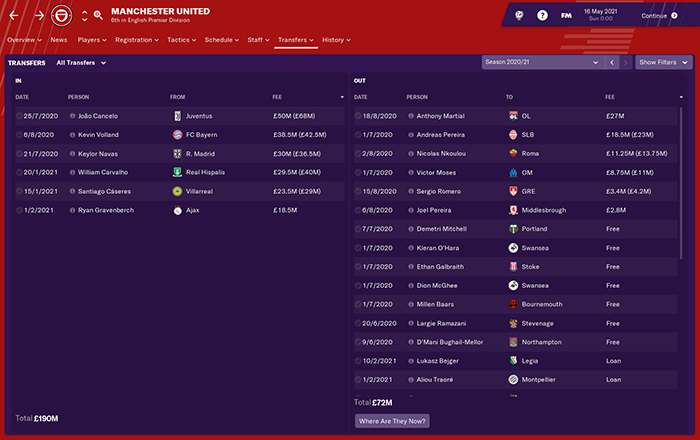 United win two points from the opening three games and never really recover. They are knocked out of the Champions League at the group stage and score a miserable 27 goals in the first half of the Premier League campaign.

They end the season with 62 points, 27 behind winners Man City and – incredibly – with two fewer than 2013-14. Solskjaer achieved the unthinkable: a worse title defence than David Moyes. He is sacked in May and the whole cycle starts again. 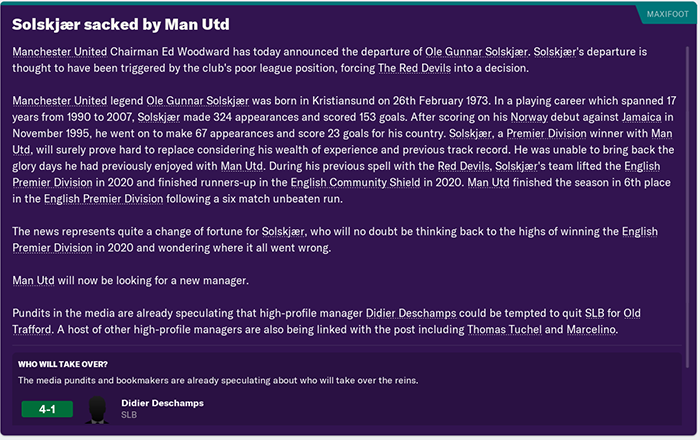