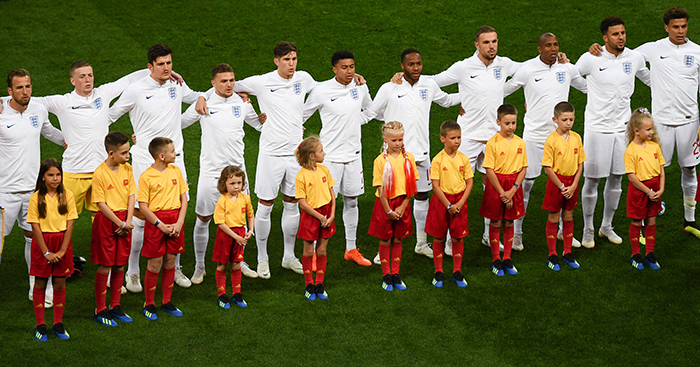 Gareth Southgate and his fledglings certainly made the country proud in Russia, but some put their achievement in reaching the World Cup semi-final down to mere luck of the draw.

England reached the last four for the first time since 1990 but admittedly benefitted from relatively kind fixtures which saw them knock out Sweden and Colombia before losing to Croatia in the semis.

It’s easy to disparage such an achievement on the international stage, so how about a sterner test? Using Football Manager, we’ve placed the England squad into the Premier League to see how this particular blend of players survive the challenge that is club football.

Replacing Cardiff City, the presence of the Three Lions means that the traditional “big six” has been expanded to seven teams, meaning one of the English juggernauts will definitely end the season empty-handed.

The game predicts them to finish fourth, just like they did in the World Cup – which wouldn’t be too shabby considering the opposition they’re up against.

Off to a bad start

Unfortunately, the early results are disastrous. Five points from three games wouldn’t be the end of the world normally, but considering the fact they drew with Wolves at Wembley and Leicester City away from home before taking down West Ham by a lone goal from Jesse Lingard, it can’t be classified a good start.

Worse yet, John Stones and Ashley Young are already out with injuries. And next up, it’s Spurs and United, both away from home.

The first is a win – 2-1 to the Three Lions, with all three goals scored by Harry Kane – followed by a straightforward defeat at Old Trafford.

They follow up these matches with a few easy victories, but they’re already off the pace, lying in sixth after seven matches. 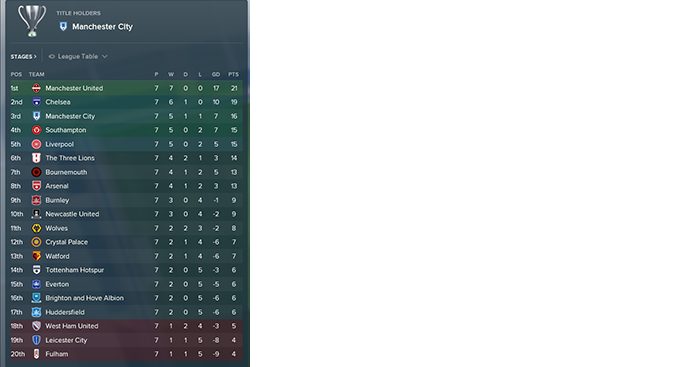 To be fair, Manchester United are setting quite the pace with a 100% record – and many of the England squad’s problems can be at least partly attributed to the fact that almost everyone is taken away on international duty for reasons that should be fairly obvious.

United don’t let up as the year progresses, sitting on 42 points and a +27 goal difference by the middle of December.

Meanwhile, Southgate and co. have also enjoyed a nice period, not losing a single match since their visit to the Theatre of Dreams, tying for third place with Arsenal and Chelsea while having a game in hand.

Hot off the heels of a draw at the Emirates, they now have to go to the defending champions’ home turf to make something happen.

Shockingly, City give away a penalty inside eight minutes which Kane coolly converts, then they lose Fernandinho to a straight red card exactly on the half-hour mark. Pep Guardiola protests so vehemently that he is also sent to the stands.

Injuries to David Silva and Sergio Agüero compound City’s woes and The Three Lions run out as comfortable winners with a 3-0 scoreline. 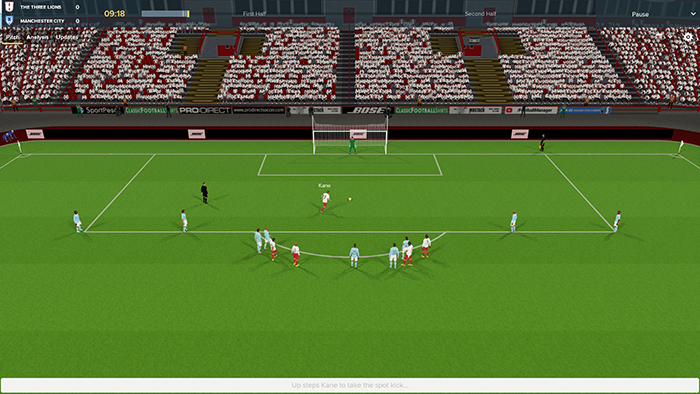 The England squad’s excellent streak continues well into January, as they pick up four wins and two draws over the festive period including a triumph over Chelsea at Stamford Bridge and a 1-1 draw at Anfield.

They do suffer their second loss of the season against Tottenham but manage to avenge their defeat against Manchester United. By now they are sitting pretty in second place, albeit still eight points behind the Red Devils. 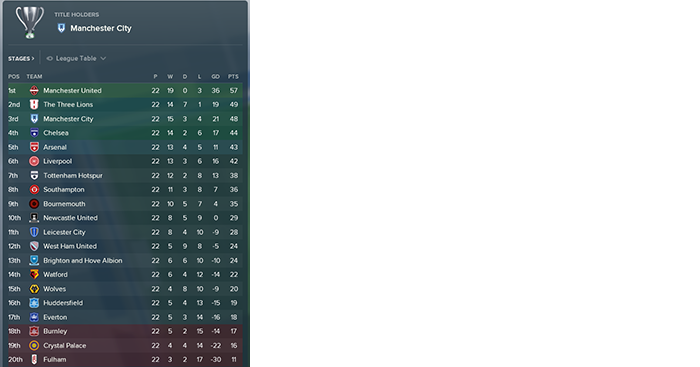 Unfortunately, this is where they completely collapse, leading to many questions about the mental strength of the team.

Consecutive defeats to Swansea in the FA Cup and to Newcastle and Huddersfield in the league puncture whatever delusions the fans may have had about a late title challenge, and it gets even worse in March as a goalless draw with Southampton and away defeats to Fulham and Everton see them drop down into fifth place.

A win over Crystal Palace is merely a band-aid for an arterial wound.

Speaking of which, niggling injuries to Jordan Pickford and Kieran Trippier are also a concern, and so is Raheem Sterling’s continued goal drought wearing an England jersey: he’s only scored twice throughout the season so far.

Another damaging defeat to Bournemouth makes things even worse, and their run-in is abysmal, with City, Arsenal and Chelsea to face in the last four games of the season.

The one silver lining? Harry Kane is on track to pick up the Golden Boot, leading the pack ahead of the likes of Roberto Firmino and, erm, Tottenham’s Harry Kane.

He keeps Champions League qualification dreams alive, scoring both the goals responsible for the 1-0 wins over City and Arsenal, but the Three Lions are still two points behind Liverpool in the race for fourth with three games to go.

Unfortunately, the must-win game against Chelsea starts in the worst possible way as the boys in blue get straight down the flank and cross for Alvaro Morata, who puts Chelsea ahead after 43 seconds of play.

However, England don’t collapse, roaring back into action with delightful set-piece work. A corner at the end of the first half and then a Kane free-kick in the 51st minute are enough to turn around the game; their third goal from yet another corner in the dying moments of the match is the icing on the cake. 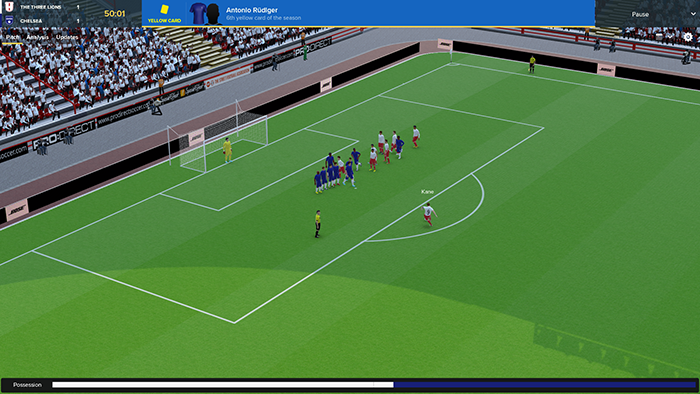 Yet despite winning all four of their last games, England still miss out on the last Champions League spot, finishing a solitary point behind Liverpool.

Their 72-point tally would have netted them a fifth-place finish in real life as well, so chalk one up for realism here. 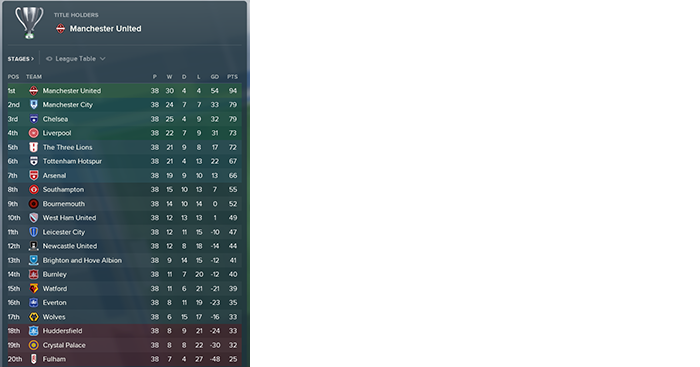 Kane, meanwhile, only finishes third in the race for the Golden Boot despite claiming many of his Tottenham counterpart’s goals to no avail.

How about their international duties, you may ask? According to the game, the latest England squad “shows a sizable bias towards The Three Lions players”, featuring 12 of them in the preliminary squad.

It looks like Southgate and Southgate see eye to eye on the important matters.