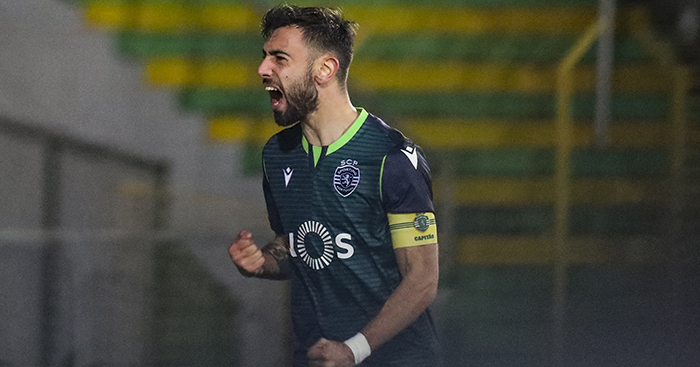 It remains to be seen whether Manchester United will ever sign Bruno Fernandes – but we can at least speed things up on Football Manager 20 to see how the midfielder might do at Old Trafford.

With time running out in the transfer window, United and Sporting are reported to still be some way apart in their valuation of Fernandes. But there’s no such worries in the virtual world – we simply used the data editor to place Fernandes at United from the start of the current season.

Oh, and just for a laugh we thought we’d put Roy Keane in charge.

His argumentative approach to punditry has been amplified by the mess engulfing United this season, though it must be pointed out he has been consistent in saying Ole Gunnar Solskjaer should be given more time to turn things around at Old Trafford.

Indeed, he has previously made it known he thinks the club should be spending a lot more on getting world-class players into the club. His arguments seem, for the most part, to be about how simple everything should be for a club of United’s stature.

But we can’t get rid of Ed Woodward or the Glazers so let’s see how Keane fares as manager in the current set-up.

Well, who could have predicted Keane’s tenure would be wild, erratic, emotional but ultimately average?

To be fair to him, fantasy follows reality as United fail to sign a single player, no doubt infuriating Keane from the get-go. But to get the best out of what he’s got he plays 4-4-2 pretty much every game, keeping it simple.

Things began brightly with an initial nine-game unbeaten run in all competitions, but United just couldn’t score enough goals and eventually the results began to turn sour. Keane couldn’t get them playing in the Big Six clashes, losing at Arsenal and Chelsea in the first few months of the season. 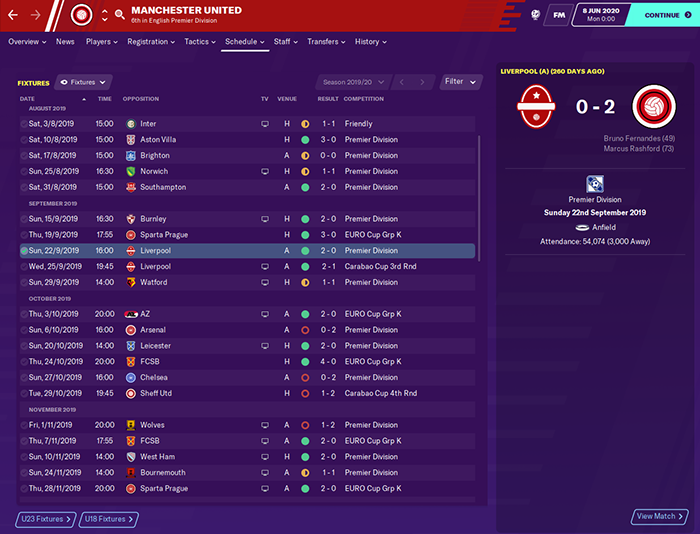 At the halfway stage of the season, United had 35 points, more than Solskjaer has accrued in 24 games and counting.

It all started to go wrong around Christmas, when United went on an abysmal run of one win in eight league games between December 15 and January 21, only for results to lurch right back the other way again with seven wins on the spin through February. It is truly chaotic stuff.

United meander for much of the rest of the campaign, remaining loosely in contention for the Champions League spots but let down by the odd defeat to, say, Everton or Newcastle. The Europa League campaign, however, goes swimmingly and the Red Devils impress by beating Arsenal and Tottenham in the early rounds of the FA Cup.

In fact, another of those seven-game winning streaks (the third of the season) between April 14 and May 7 provided hope of a successful debut campaign. Their chances of a top-four finish were long gone, but Keane had done a Mourinho and put the club in the Europa League and FA Cup finals. If they can just keep this form going…

United lose to Liverpool, then draw with Wolves and after beating Burnley in a Premier League dead rubber promptly lose both finals. Manchester City win the FA Cup on penalties after a 2-2 draw at Wembley, while Valencia lift the Europa League courtesy of a second-minute winner from Carlos Soler.

To nobody’s surprise, Keane quits his post four days after the European loss. Perhaps his failure to get United back into the Champions League was just too much to bear… but with the club statement citing ‘mutual consent’ it seems more likely Keane was softly pushed. 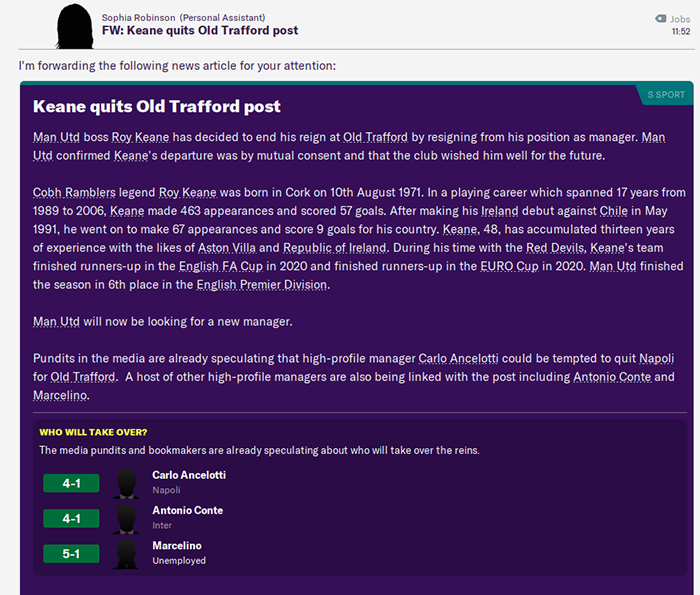 There is one big success story of the campaign, and that’s the role Fernandes plays from the right side of midfield. Keane’s Ferguson-in-the-90s tactics don’t work out for the squad as a whole, but Fernandes has superb attributes in pretty much all areas and consequently excels in his simplified role.

He ends the campaign with the highest average rating in the squad, bagging the most assists (18) and scoring the second most goals (18) behind Marcus Rashford. Fernandes’ best performance of the season is undoubtedly in the 2-1 win against Borussia Monchengladbach in the second leg of the Europa League semi-final, in which he scores once and gets a man-of-the-match-winning 8.1.

The season isn’t without its major lows, however, and after missing out on the FA Cup semi-final through injury, Fernandes then misses a crucial penalty in the shootout of the final, ruining what had been an excellent – and goal-scoring – individual performance. The 25-year-old was distinctly average in the 1-0 defeat to Valencia in the Europa League final.

Nevertheless, Fernandes was the linchpin of Keane’s team in every competition, captured perhaps most succinctly in one telling statistic: he created 90 chances in the Premier League, more than double that of any other United player.

He finished the season with a record of 52 games, 18 goals, 18 assists, a 7.40 average rating and the Player of the Year award. 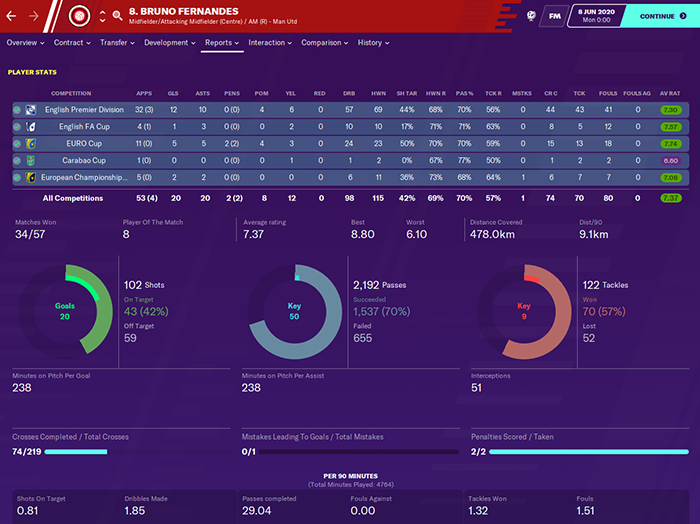