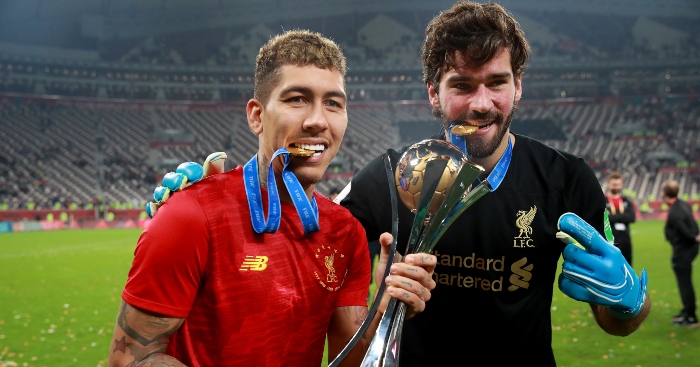 February 5 is a notable day in football, as the birthday of both Cristiano Ronaldo and Neymar. This got us thinking – is it the best day or are there other contenders?

We’ve done some extensive* research (*looked at a few different dates) to come up with some more great birthday groups, so you can get a feel for some of the greats who share your date of birth.

To make things simpler, we’ve kept these as five-a-side teams with at least one goalkeeper and one defender. No place for Ronaldo, Neymar et al, then, as there’s unfortunately no keeper fit to lace their boots.

Mo Salah and Michael Laudrup can do the running and feed Tore Andre Flo, who will need to get used to the head height rule.

Cameroon goalkeeper Carlos Kameni keeps goal behind a solid defensive line of Gary Neville and Josip Simunic, made even more solid by Claude Makelele in front of them.

You might think this team would need more in attack, but we reckon Roberto Baggio could do it all on his own.

Ederson keeps goal for this side, forcing Phil Jagielka into a defensive slot alongside William Gallas.

Thierry Henry, who was also born in the same year as Gallas, can drop deep to make room for Spanish Euro 2008 striker Dani Guiza up top.

Sweden’s Emil Forsberg edges out Jimmy Bullard for the midfield spot behind a daunting front two of Alvaro Morata and Pele.

We’ll have to make do with Ben Amos in goal here, but there was no way we were passing up on the opportunity to build the rest of this team.

Vincent Kompany and Roberto Carlos at the back, with Fernando Gago feeding Sadio Mane in attack. Lovely.

Brazil international keeper Diego Alves won’t be offered much protection in this team, in which David Alaba takes a roaming defensive role.

Juan Roman Riquelme can sit in front, letting Alaba do all his running as he feeds Lionel Messi and Luis Garcia. Woof.

Manuel Neuer feels like the perfect five-a-side keeper if you’re playing rush goalie, and one of the worst possible options if you’re not.

In this team, the German has Nicolas Nkoulou helping him out in defence and Gaizka Mendieta mopping up in midfield. Jimmy Floyd Hasselbaink and former world-record signing Gigi Lentini can take care of things up top.

Rob Green just about earns his spot in this team, though he and sole defender Nacho will have to be at their very best.

At least Pep Guardiola and Riccardo Montolivo will keep their positional discipline in midfield, while Ivan Zamorano can do the rest on his own.

Alisson and Roberto Firmino both make the cut here, with Tammy Abraham supporting the latter in attack.

Trevor Brooking and French international and former PSG boss Luis Fernandez can keep position from the middle of the park – who needs defenders?

Marcus Rashford has to settle for a spot on the bench in this team, though fellow Man Utd favourite Denis Irwin takes charge of the defence in front of former Barcelona keeper Ruud Hesp.

A midfield pairing of Dunga and Guti has the ‘when one stays, the other goes’ balance we need, while Marco van Basten is the perfect man to play in front of them.

Five-a-side is all about having a great central core, and Fabien Barthez behind Lorenzo Amoruso, Kevin De Bruyne and Stephane Chapuisat is exactly that.

It even gives you room to hand a roaming role to Demarai Gray, who strikes us as the kind of winger who would kill it on a smaller pitch.

If you want to make your five-a-side opponents feel sick to their stomachs, put Joao Felix and Wilfried Zaha on the same team.

The supporting cast isn’t too shabby either, with Jens Lehmann and Aleksandr Kolarov adding a different air of unpredictability, and Patrik Berger taking care of the whole ‘having a midfield’ thing.

And after Zaha and Felix have run the opposition ragged, if you’re a real sadist you can bring Daniel James off the bench to run at the other team as they tire.

A real team of leaders to round it off, with Sami Hyypia and Trent Alexander-Arnold playing in front of World Cup-winning goalkeeper Dida.

Gilberto Silva grabs the armband from Hyypia, while the final spot calls for a dominating striker who can lead the line on his own. It’s a good job Diego Costa has the same birthday, then, really.

Nine of the best ever sh*thouse fouls: Ramos, Valverde, Grimandi…