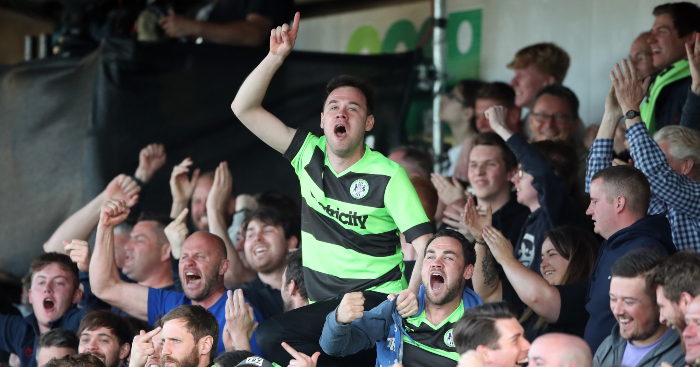 After becoming the world’s first vegan football club in 2015, Forest Green Rovers have never been afraid to blaze a trail – but now they’re taking a crucial part of the matchday experience for many fans to the next level.

Bovril has been warming the terraces for over 120 years – and in what is sure to be World Vegan Day’s meatiest news story – the iconic beefy brand and Forest Green, the world’s greenest football club, have released details of a new, entirely vegan collaboration.

Ensuring that no football fan is left out in the cold, Bovril is launching a vegan version of the beefy, British half-time drink. The makeover comes as Forest Green team up with Bovril’s own ‘backroom staff’ to develop a new high protein paste made from beets instead of beef, that will be on offer exclusively at The New Lawn.

Since making the switch to become the world’s first completely vegan football club in 2015, the League Two outfit have totally transformed their half-time menu.

Yet despite listing award-winning vegan Q Pies through to delicious vegan beers, there’s always been one iconic footy ritual that has never been able to be matched – until now. The collaboration will ensure all fans can get in on the tasty half-time action when Forest Green reopens the turnstiles.

Through the special plant-based recipe, Bovril is set to turn the terraces green and help power supporters for the full 90 minutes once fans are welcomed back into stadiums. Set to make its full debut to coincide with the opening home game of the 2021-2022 season, the hope is that everyone will be able to raise their mugs in celebration of Forest Green Rovers’ latest signing.

“We’re famously not fans of tradition but a pie and a mug of Bovril are for many people a football tradition, and while we have great pies without animals in them, we’ve no Bovril alternative,” said Dale Vince, Forest Green chairman and an ambassador for Veganuary.

“That may be about to change, with the advent of plant Bovril.  I think that would be fantastic.

“There are so many benefits to a plant-based diet, not least athletic performance, and as it happens, beetroot is renowned for its enhancing properties.

“It’s definitely something for our players, another edge to our game. Make no bones about it – plant Bovril is a fab idea.”

The news comes following extensive talks from the nutrition team at Forest Green and Bovril’s R&D team to develop the new formula, which they aim to serve up to fans exclusively when they return to The New Lawn in 2021.

Fans of Bovril’s original beefy formula should fear not. The iconic winter warmer will remain available at stadiums throughout the country, as well as on shelves in all major supermarkets, powering fans through games both on the sofa or in non-league football stands this season.

What would Klopp do? Learning from the LFC boss about food & drink