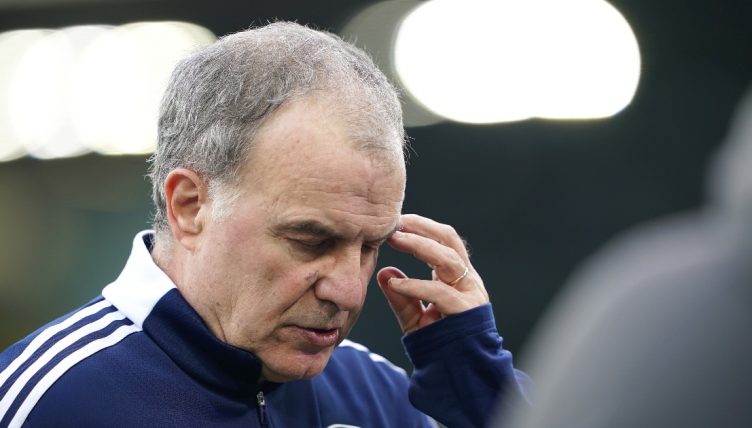 Marcelo Bielsa has left his post as Leeds United manager.

One of the most popular figures in the entire history of Leeds, Bielsa’s sacking has led to a heartbroken reaction from the club’s fans on social media.

There are several players within the Leeds squad that have enjoyed career transformations since Bielsa took over in 2018, having gone from midtable in the Championship to midtable in the Premier League over the course of an unforgettable three years.

However, results have dipped this season, and the Yorkshire club currently finds itself in a relegation battle, having conceded 20 goals in their last five outings, and one point taken from their last six.

“This has been the toughest decision I have had to make during my tenure at Leeds United, taking into account all the success Marcelo has had at the club,” wrote Leeds chairman Andrea Radrizzani in a club statement.

“With Marcelo as our head coach, we had three incredible campaigns and the good times returned to Elland Road. He changed the culture of the club and brought a winning mentality to us all.

“The moments created, particularly in the 2019/20 season and winning promotion to the Premier League, will of course live long in all our memories, myself and the fans included.”

“Since arriving at Leeds United Marcelo had a huge impact on the club, on a scale I have not seen before,” added Victor Orta, the man responsible for bringing Bielsa to Elland Road.

“He has created a legacy, overseeing major infrastructure improvements at Thorp Arch, uniting the supporters and the players, and giving a clear pathway for young players to transition into the first team.

“It is disappointing his reign has had to end in this manner, given the special times we have enjoyed in recent years, which have been some of the best in my career, but we cannot hide from recent results.”

Here are how members of the Leeds squad reacted, alongside some former players.

Thank you for everything Marcelo, in these past 4 years you’ve helped me grow into the player I am now. You have taught me so much and I will cherish that forever 💙💛 pic.twitter.com/8iqjNOYkcO

Gracias Marcelo.
Glad I could work with you and learn from you. 🙏🏼 pic.twitter.com/c8iD35QFbp

It’s been an honor working with you and all your staff. A real club legend. Thank you 💙💛 pic.twitter.com/aM6YIZ2Gdf

You United a club, a city & a team going nowhere. I will be forever grateful for everything you and your staff did for me and my family. A club legend of our era. Gracias Marcelo 🤍 pic.twitter.com/wiacGcoxmh

Thank you Marcelo for everything you have done for me.

You saw in me what I didn’t even see in myself. You helped me grow as a player but most importantly as a person.

Wishing you all the best in your next chapter.

Thank You Marcelo for everything 💛💙 pic.twitter.com/A7Av23boXk

What a man.
He has changed so many lives for the better and has created an incredible culture at the club again.
Forever grateful Mr Bielsa #MOT https://t.co/rmOy9H8drD

Unhappy to hear that #Bielsa has left @LUFC any manager would have found it hard to lose the spine of his team and still get results. All Leeds fans will always love him… What’s next for #Leeds #mot