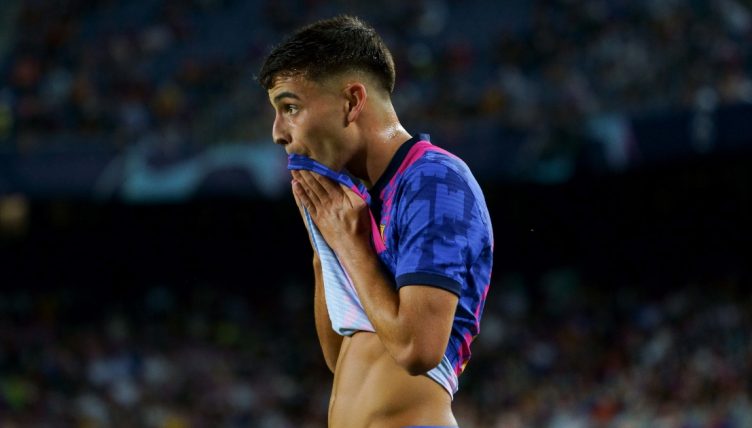 Barcelona have seen a host of big-name players leave recently – and there could be more to come next summer.

While the departure of Antoine Griezmann wasn’t particularly mourned, losing Lionel Messi was a catastrophe. With Barca’s well-documented financial problems and rich rivals in other leagues, 2022 could be another galling summer for the club’s supporters.

We’ve taken a look at four players who could leave for no cost come June 30 2022.

Barcelona are desperate to tie Fati to a long-term contract – but that may be easier said than done.

Having inherited Messi’s number 10 shirt, big things are expected of the 18-year-old, whose performances are providing Barca fans with hope during this lean spell.

Fati’s current deal expires in summer 2022, but Barcelona believe they have the option to unilaterally extend the player’s contract by two years, an option they will take regardless of whether negotiations with Fati’s agent Jorge Mendes over a new long-term contract bear fruit.

Mendes, however, is contesting the validity of that unilateral extension option. The Portuguese agent and Ansu’s father Bori Fati say that the unilateral option is not applicable as the initial contract was signed when Fati was still under the age of 18.

It all revolves around differing interpretations of Paragraph 18 of the Fifa transfer regulations, but if Mendes and Fati senior are correct, then Ansu Fati could be a free agent come summer 2022 and could sign a pre-contract agreement with another club in January.

Reports suggest Fati would like to stay at the Catalan club, and negotiations about a new contract are ongoing. But Barca’s financial situation is not conducive to offering him the big contract he could surely command.

Barcelona’s prestige would take another massive hit if Pedri left the club next year – and it seems that too is possible.

The 18-year-old enjoyed a breakout 2020-21 season, establishing himself in the Barca first-team and starring at this summer’s European Championship for Spain.

Like Fati, Barcelona have a unilateral option to extend Pedri contract. But, like Fati, he signed that contract when he was not yet 18. If Mendes wins out in the Fati case and he becomes a free agent next summer, then Pedri could go the same way.

Barcelona’s directors have been in negotiations with Pedri’s representatives over a contract extension for weeks, with the club optimistic he’ll sign a new deal.

But, if they fail to agree terms, Europe’s elite will be queuing up to secure Pedri’s services for the next decade and beyond.

Dembele has regularly infuriated Barca fans with his performances during his four-year spell at the Camp Nou.

After costing €105 million to prise from Borussia Dortmund, the winger has suffered from a combination of injuries, inconsistent form and questions over his lifestyle choices.

With his contract due to expire next year, Dembele is free to talk to foreign clubs in January and the likes of Chelsea, Liverpool and Manchester City are rumoured to be monitoring the situation.

Roberto’s current deal expires in 2022 and, as Barcelona have yet to tie him down to a renewal, Manchester City are rumoured to be monitoring the situation.

After experiencing widespread booing following his performance against Bayern Munich this season, the 29-year-old said: “I’m not going to fool you, that day I was very screwed up.

“Both the day of the game and the following days. It has never happened to me and it’s unpleasant.”

Perhaps Roberto needs a change of scenery to rebuild his confidence.