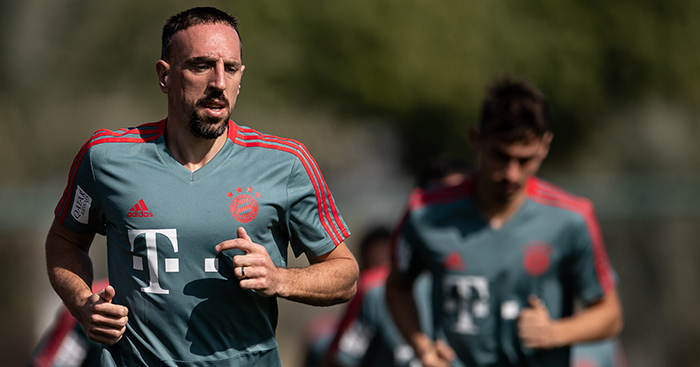 Bayern Munich winger Franck Ribéry has divided fans by eating a £1,000 steak covered in gold. Here’s everything you need to know about it.

Ribéry has been terrorising German defences for more than a decade. He has won the Bundesliga on eight occasions in that time and the Champions League once, in 2013. That year he was awarded third place at the FIFA Ballon d’Or Gala, behind only Cristiano Ronaldo and Lionel Messi.

Last week he ate a steak covered in gold.

Now, lots of people — the kind of people who get angry about colourful hairstyles and diamond-studded sinks — will tell you that this is a bad thing, that Ribéry is a fundamentally immoral character for having bought and eaten a gold-covered steak.

They’re wrong. Franck Ribéry’s extravagant dinner and subsequent reaction to his critics is the feel-good story we need right now.

German teams are currently enjoying their winter break, and Bayern Munich are taking part in their now-annual training camp in Qatar.

At some point on Thursday, Ribéry used his free time to visit a steak restaurant in Dubai called ‘Nusr-Et’. The restaurant is owned by Turkish butcher and celebrity Nusret Gökçe, better known as ‘Salt Bae’ due to his extravagant manner of seasoning meat.

How do people feel about it?

Predictably, a lot of people were unhappy with Ribéry posting the above video, criticising him for what they perceive to be an ostentatious display of wealth.

I could afford it but I’m not an idiot and would find something better to spend my money on. Ribéry is a moron and a totally overrated, washed-up footballer.

Others defended the footballer’s right to spend his money on what he wants.

It’s worth noting that ‘Salt Bae’ also welcomed Lionel Messi and Paul Pogba to his restaurant just a few months ago, to considerably less fanfare.

In fact, Ribéry’s team-mate Robert Lewandowski got the full works only a few days ago, but his meat appeared to be a normal colour.

So why is it a big deal?

With Greggs also launching a vegan sausage roll last week, now is a busy time for faux-outrage in the food world. And just like the harmless Greggs snack, there’s nothing particularly scandalous about Ribéry’s dinner.

But the story has been made juicier by Ribéry’s fiery reaction to his critics.

In an Instagram story posted after the video, he wrote: “For 2019, let’s dot the i’s and cross the t’s… Let’s start with the jealous, the haters, those only born because a condom had a hole in: fuck your mothers, your grandmothers and even your family tree. I owe you nothing.

“My success is, above all, thanks to God, me and my loved ones who believed in me. For the others, you’re nothing but pebbles in my socks!”

Can he say that?

Family trees… Pebbles in socks… Ribéry has really given it both barrels here, but he has a point.

Obviously, most people can’t afford to eat a £1,000 steak. But the fact that there is gold on this particular cut of meat seems to have warped some people’s opinions. Don’t forget that non-celebs can buy mediocre vodka with gold flakes in it, as well as perfectly affordable cakes and pastries.

On Sunday, the club’s sporting director Hasan Salihamidzic said: “[Ribéry] has used words that we as FC Bayern Munich cannot accept and Franck can never use as a role model and as a player of Bayern.”

The club have issued the player a “very high” fine.

Interestingly, the club also defended Ribéry to some extent, by pointing out that the steak had actually been given to him for free.

What else does Franck Ribéry eat?

According to the official Bayern Munich website, Ribéry’s favourite food is not steak, but couscous.

His favourite drink is Coca-Cola. Does he have it with gold flakes in it? We kind of hope so.

Have other footballers enjoyed gold stuff?

Of course they bloody have.

Pierre-Emerick Aubameyang has a Lamborghini Aventador wrapped in chrome gold, while David Beckham was once dissuaded by his publicist from posting a photo of a gold-plated Macbook.

Even the saintly Harry Kane has a golden boot.

What can we learn from all of this?

Along with fellow wideman Arjen Robben, Ribéry is set to depart Bayern this summer, ending a 12-year stay with the German giants.

Given his achievements with the club, the golden steak incident is unlikely to be remembered for long.

However, that doesn’t mean we can’t all learn something from the experience.

Sure, Ribéry’s expletive-laden defence of a £1,000 steak might seem a little absurd, but is it any more absurd than obsessing over what footballers spend their money on?

If we can’t accept the golden steak for what it is, we’re no more than pebbles in Ribéry’s socks.