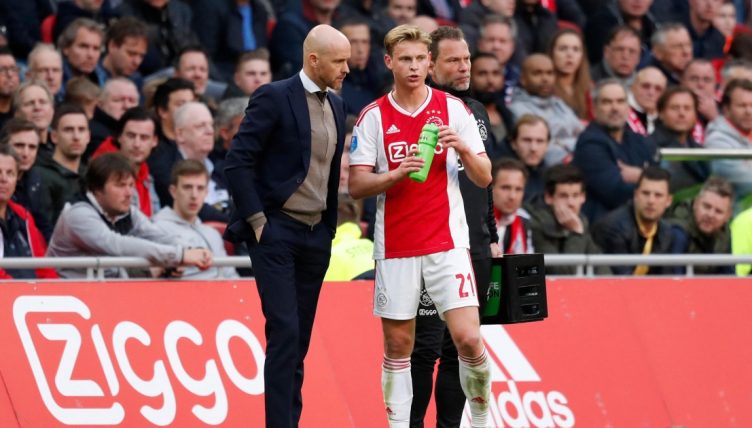 Having played under Erik ten Hag at Ajax, Frenkie de Jong is now being heavily linked with a move to Manchester United.

De Jong made 59 appearances in all competitions under Ten Hag, winning one Eredivisie title and the KNVB Cup before joining Barcelona in 2019.

The midfielder hasn’t been able to replicate his Ajax form at Camp Nou and could reportedly reunite with his former manager at Old Trafford.

We’ve looked at what the pair have said about each other over the last few years.

“Hi trainer,” De Jong said to Ten Hag in a video message after the latter was named as United manager in 2022.

“It was a great time [at Ajax], in which you have shown results with attractive football. You have proven yourself as a top trainer and you’ve deserved this step. I want to wish you good luck and the best regards.”

‘Enjoyed working with him’

“I will not go into that,” De Jong told Algemeen Dagblad in 2022 when asked about the United rumours. “Not even about other names or clubs. I used to be naive and open-minded about it. I don’t do that anymore.

“I understand that that link is made. That sum is not that difficult, it is logical. I have enjoyed working with Ten Hag at Ajax – and I can’t look into the future, of course.”

‘We had amazing tactics’

“All of the technical staff [at Ajax] were really important,” De Jong told ESPN in August 2019. “You can have quality players, but you need good tactics as well. I think it’s one of the most important things today in football and for me, we had amazing tactics.

“Every game I had the feeling: ‘OK we’re going to beat them because we’re going to do this, this and this and we have the quality players.’ So I think a big part of the success was also the technical staff.

It’s not as simple as [saying]: ‘Go out and enjoy yourself!’ I think these days, in football, it’s really, really important that you have good tactics, that you know how an opponent is going to press, what you’re going to do against it and I think we were prepared on all those things, so the technical staff did an amazing job last year.”

‘You need to give him freedom’

“The players’ qualities determine how you play,” Ten Hag said in July 2019. “Take Frenkie de Jong. We have really been looking to find ways to use his skills in the best manner.

“Where can he play best, for the team and to showcase his talent. Everyone was screaming: Frenkie is the biggest talent, etc etc. Well yes. But, where? In midfield? Ok, but which role? His quality is that he makes the forwards perform better.

“He is a wanderer, an adventurer, he’s always on the move, like a shark. With the ball, often, but also without the ball. So if you put him on 6, he’s away too often.

“But you need to give him freedom, otherwise you can’t the best out of him. It wasn’t an easy puzzle, so I dediced to play with two number 6s and only one attacking mid. And in this way, we can also dominate the half space, and force opponents to choose.”

“The quality of your players decide how you will play, and with what system,” Ten Hag told Trouw in May 2019. “We had to find a way to make Frenkie function in the best possible way. You saw his incredible talent, but where do we have to use him to get the best out of him and his talent?”

‘He leaves the middle of the pitch’

“He leaves the middle of the pitch too often for that,” Ten Hag said in 2019 when asked if De Jong could play in a lone no. 6 role. “And if you don’t give him the freedom to go forward, you won’t get the best out of his game.”

“He is always calm and always has the solution,” Ten Hag told UEFA. “He scans so well that he always knows how to go forward. You can hardly put him under pressure – that is such a great gift.”

“We are very proud of Frenkie de Jong,” Ten Hag said after De Jong was named Champions League midfielder of the Season in 2019.

“He was extremely valuable in the Champions League for us. He was often the one who made us play football. It’s fantastic that he won this trophy. I congratulate him.”

‘All the qualities to succeed’

“Frenkie at Barca? He will find his way there because he has all the qualities to succeed,” Ten Hag told Fox Sports in May 2019. “He played Champions League on the highest level, there should be no doubt.”

– “I once asked Frenkie the question: are you number 10? He is not an offensive player,” Ten Hag told Ziggo Sport in February 2020.

“I remember I took him away from that position. Frenkie is not a player that scores goals. He is a player that takes care of the build-up, providing care for those that assist and score.

“Frenkie is the definition of a modern and complete midfielder. He can defend and attack. But you have to create a role for him where he can do both like we did with Ajax and the national team. That’s how he performs best.”

– “I would have liked to continue counting on both of them [De Jong and Matthijs de Ligt] for one or two more years, because It would have been better for Ajax and for Dutch football,” he added.

“With them you can go further in the Champions League because they are very high quality players.”