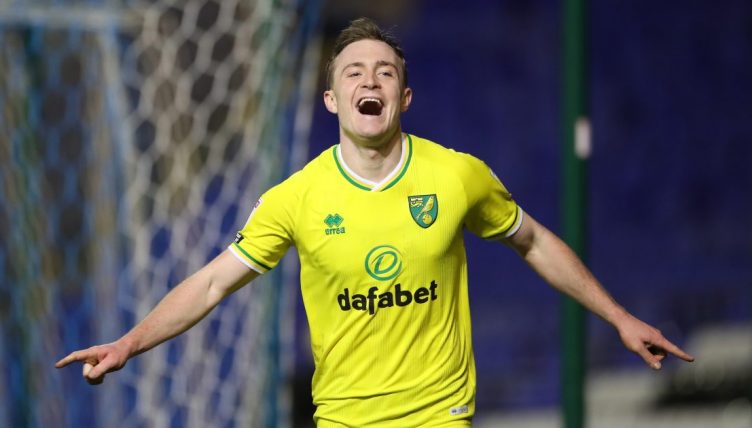 Having impressed on loan at Norwich City, Oliver Skipp could get his chance amongst the Tottenham first-team next season.

Skipp has made 42 appearances in 2020-21, helping Daniel Farke’s side go top of the Championship as they look to make an immediate return to the Premier League.

We’ve rounded up what people have been saying about the midfielder during his loan spell at Carrow Road.

“We take it for granted that Oliver Skipp plays nearly every game with so little mistakes,” Farke said in December 2020.

“He had to adapt in the last two games because he’s now playing with Alex Tettey who plays a deeper role, he has to drive the game forward now and was composed to the task. It is no coincidence that Jose Mourinho says he has potential to be Tottenham’s skipper one day.”

“He’s a machine,” Tettey said in November 2020. “He’s a top, top player. To be 20-years-old and have that maturity in his game is very impressive. He should keep going. He’s playing every game, getting stronger and learning every game, so I’ve been impressed.”

He’s better than that https://t.co/3HhvtUKkFG

“Skippy’s got experience beyond his years really because he looks like he’s played at the top level for 10, 15 years. It’s hard to believe he’s still so young,” Hanley told The Athletic in January 2021.

“I know he already gets a lot of credit but he probably doesn’t get enough, for me, because he does all the stuff that you love as a centre-half. Kenny’s the same. They both can show top quality but the ugly side of the game they do so well. I don’t think they get enough credit for that, but they certainly do off us as centre-halves. We appreciate what they do.

“The two of them do it so well. It’s a massive part of how we play and they deserve all the credit they get for it.”

“He’s 20. It’s incredible what he is doing,” McLean said in March 2021. “To come in and perform like that every three days, for such a young lad is unbelievable.

“The maturity he shows in his game is outstanding. The sky is the limit for the boy, I think everybody has seen that this season. I get to see that every single day.”

“He has had an outstanding loan,” Powell told Sky Sports. “I only met him a couple of times because he went out on loan before I joined Spurs. But everyone speaks highly of him.

“He has been at the club since he was seven, so he has developed through all the age groups. And played at England’s youth levels, so there is a lot of trust in him. I think that’s a big thing for a player when you know the manager trusts you and Oliver Skipp has that.

“I mean he has excelled. He has only missed one game and that’s because he was away with England. They obviously like him. I know he trains well regularly.

“Who knows what will happen next season for him. He has a decision to make. I mean he signed a long-term contract with Spurs before he left. But he has gone there, he has been exposed to senior football and learning what it means to win football matches. And he has taken to it ever so well.”

“I am always careful to praise young lads too much,” Farke told the Eastern Daily Press in February 2021. “I like to keep the pressure high on them because in these times they are celebrated so much by social media, agents and things like this.

“It’s difficult also for young players to handle that praise so I am quite careful in praising them too much but actions are more important than any words and when you look at Oliver’s season you can realise that he has played more or less every second in the league for us, for a side that has lots of competition in the squad.

This says a lot about how much I rate him and how much I value him, I don’t want to praise him too much in public, it’s more like each and every day I keep on criticising him.

“I ask for more goals, for more assists, better passing choices, for many topics to improve – but my actions speak louder than my words.

“All being well, Skipp will have a promotion on his CV,” the Norwich City reporter said on Pink Un in February 2021. “His game has developed to the extent whereby he has become a crucial component to Farke’s midfield engine room.

“At 20-years-old, he is beginning to look like a player capable of stepping up to the demands of the top-flight. His tactical awareness is more polished, his trademark recovery runs followed by crunching tackle to retrieve possession is an art form akin to a beautifully weighted Emi Buendia through ball.

“Despite his willingness to defend and ability to screen the City backline, his work in possession is equally as impressive.

“Skipp breaks the lines regularly with vertical passes. Farke has placed a ban on horizontal passes this season, and the Spurs midfielder has been one strictly encouraged to play probing passes forwards.”

“Even if I had the loftiest of expectations imaginable, I would still be utterly, utterly blown away by what I’ve seen from a man I’m quite happy to call a future England captain,” the Norwich City reporter wrote in the Eastern Daily Press in March 2021

“Of all the young players we’ve had through the door at Carrow Road, while not the most exciting, he’s probably the one with the oldest head on his shoulders – although he’s in a real tussle with Max Aarons for that title.

“Everything about how Skippy plays the game screams maturity – an old head on a young pair of shoulders. He has a great touch, can pick a pass and pivot the play and do everything you could ask of a defensive midfielder.

“However, the one thing that has impressed me most is how he reads the game. Despite barely being 20, he reads the game like a seasoned veteran – like somebody who knows nothing other than football.

Oliver Skipp has to be one of the best loan signings we've made, upgraded that cdm role to a different level #ncfc #thfc pic.twitter.com/yTvm77GjWi

“It’s easy to say he’s an all-rounder because he does get forward but his biggest attribute is that he can sense danger, has great positional awareness and is disciplined in that position,” Ashton told talkSPORT in March 2021.

“It’s easy to get dragged in with the way Norwich play and join in, and he does when he needs to, but it’s more the understanding of that position and the discipline and sensing of danger that is so important for Norwich, who like to keep the ball to allow their full-backs pressing forward.

“It’s so important that their holding midfielder is disciplined and can smell the danger to fill in the gap – and he’s done that brilliantly.”

“If Norwich want to stay in the Premier League, then re-signing Ollie Skipp would be the first part of that,” the Norwich legend said in March 2021.

“Skipp would be a massive plus to this team when they get promoted. They are defensively more solid now, which I think will give them a much better chance.”

“We would never be able to sign a highly-rated player like Oliver Skipp,” Farke said in March 2021. “Not on a permanent deal. It would be an unbelievable amount of money for our club.

“When you bring young players from the best clubs in the world there is always a risk. We saw the potential, we looked into his character a lot and we knew he would be fully convinced to give everything, not thinking I don’t need to work to prove I am the best in my position.

“Oliver is a perfect lad. So humble. He is a brilliant loan signing.”