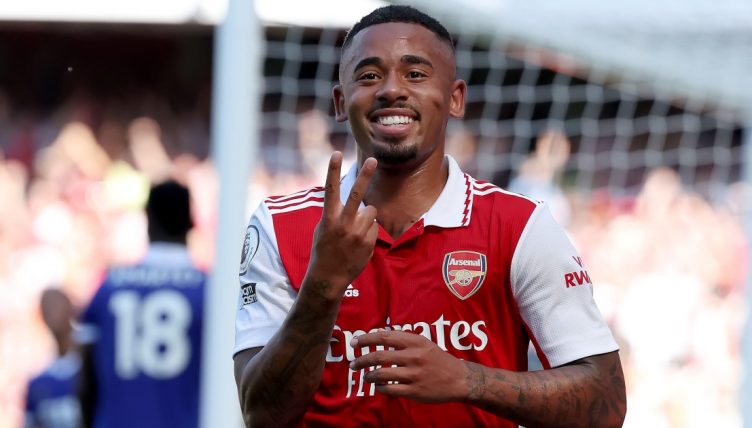 Gabriel Jesus has hit the ground running at Arsenal since joining the Gunners from Manchester City in a £45millon deal.

Jesus scored 95 goals in 236 appearances for City but fell down the pecking order following Erling Haaland’s arrival and the Gunners moved swiftly to secure the services of the 25-year-old.

He’s already made a big impact in north London and has helped Mikel Arteta’s side win their opening two Premier League games in 2022-23.

“I wouldn’t like to play against him,” Arteta said after the 4-2 win over Leicester City.

“I have never been a defender but I can imagine that they don’t enjoy it. He’s so mobile, so intuitive and is always sharp and proactive to play in any moment and any phase of the game and he’s a real threat.”

We’ve collected 11 stats that show just how impressive the striker has been since his arrival at the Emirates.

– No player has managed more direct goal involvements (4) than Jesus in the 2022-23 Premier League campaign.

– Including pre-season friendlies, the striker has scored nine goals and registered two assists in seven appearances for Arsenal. He’s averaging a direct goal contribution every 39.8 minutes.

Gabriel Jesus taking the Premier League by a storm 🇧🇷🌪pic.twitter.com/aqIG7wEi47

– Jesus is the first Arsenal player to register four direct goal involvements in a Premier League game since Alexis Sanchez scored a hat-trick and got an assist against West Ham in December 2016.

– He is also the first Arsenal player to score more than once on his home Premier League debut.

– The Brazil international has already scored as many league goals from open play in 2022-23 as Alexandre Lacazette managed in 2021-22.

– Jesus is more than just a goalscorer and has completed nine take-ons this season, more than any other Premier League player.

– He’s enjoying his new central role at the Emirates and has had more touches in the opposition box (26) than any other Premier League player in 2022-23.

– The striker had 15 touches in the penalty area against Leicester City, the most by an Arsenal player in the last seven seasons.

Gabriel Jesus has 𝗻𝗲𝘃𝗲𝗿 𝗹𝗼𝘀𝘁 a Premier League match in which he has 𝘀𝗰𝗼𝗿𝗲𝗱 in.

– Jesus has an xG (expected goals) of 2.06 after two league games in 2022-23 and that’s higher than every other Premier League player.

Where are they now? Arsenal’s XI from Thierry Henry’s farewell in 2007