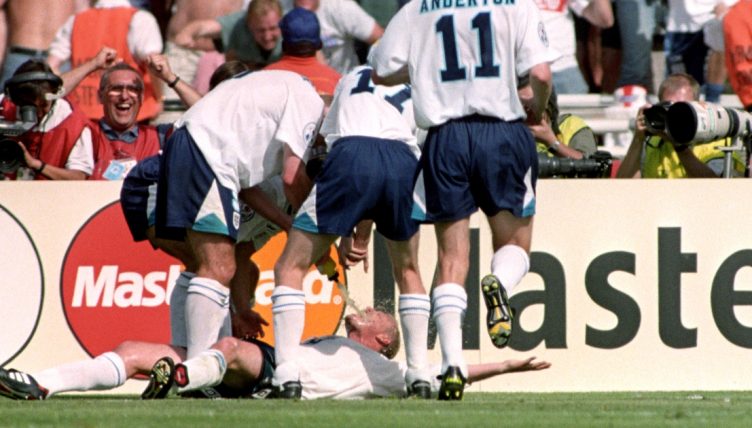 Great goals can live long in the memory for football fans – but sometimes all you need to get remembered is a great celebration.

It’s strange how some things stick in your mind. Everyone remembers Bebeto’s ‘rocking the baby’ celebration at USA 94, but can you recall the goal that preceded it? More recently, Peter Crouch’s ‘robot’ earned a place in popular culture – but what could you say about the strike that inspired it?

Here are some of the most memorable celebrations of all time, also featuring the likes of Eric Cantona, Robbie Fowler and, of course, Paul Gascoigne.

Has anything quite so understated ever exuded such magnificent arrogance?

Cantona was the coolest footballer on the planet; he knew it, and he had no qualms in reminding us.

Eric Cantona at his brilliant best for @ManUtd with *that* sublime chip 😏#GoalOfTheDay pic.twitter.com/aop7tWRuqP

Is there anything more joyous than a 38-year-old Cameroon striker dancing with a corner flag after scoring at a World Cup? No, no there is not.

“I’m a fantastic dancer!” Milla proclaimed to The Guardian in 2006, and we’re not going to disagree with him.

Everybody do the Roger Milla! 🕺#bbcworldcup pic.twitter.com/9Ll8xHiSDQ

An absolute playground classic. Quite why the sheer thrill of scoring a goal prompted Ravanelli to lift his shirt over his head we’ll never really know.

But the sight of such a fiery, angry character celebrating in such an innocent manner was a joy to behold. FIFA can f**k right off for punishing things like this with a yellow card.

Has to be the Ravanelli shirt over head celebration… Every kid in the 90s emulated it at some point #bbcsportsday pic.twitter.com/TieQY4HXWx

Another favourite celebration of all 90s kids, Fjortoft told us it was an elderly lady in the crowd that convinced him to stick with his aeroplane.

“There was a time when I was doing all silly celebrations. But it took me ages to score at Swindon. So, when I finally did, I just did the aeroplane.

“That was the first half, and as I was walking off the pitch at half-time at the County Ground, I looked into the crowd. There was this old lady. She was shouting, screaming to me and doing the aeroplane celebration.

He finished the season scoring 12 goals in the last 16 games 👏🔴pic.twitter.com/2sXYOUnXr4

Brazil were already credited with putting the ‘Beautiful’ in ‘The Beautiful Game’ – and Bebeto gave the game one of its most cheerful celebrations after scoring against the Netherlands at the 1994 World Cup just days after the birth of his third child.

That tournament was a bit of a stinker, mind.

#9 of the 50 #VFSworldCup Biggest moments – Bebeto gave birth to a celebration! In the ’94 #WorldCup quarter-final between Brazil 🇧🇷and Netherlands 🇳🇱 Bebeto celebrated his goal by making a cradle motion to celebrate the birth of his son pic.twitter.com/qen2E2T2fg

After being regularly accused by Everton fans of taking cocaine, Fowler eventually hit back in typically cheeky fashion, pretending to snort the goal-line after scoring in the Merseyside derby.

Gerard Houllier suggested the striker was just “pretending to eat grass”, but Fowler was still hit with a six-match ban. He’ll still always be God though.

When Robbie Fowler crossed the line with his goal celebration, while snorting it! 😂😂 pic.twitter.com/xq87lnhhGA

Arriving in England already vilified after helping Germany knock England out of the 1990 World Cup, Klinsmann was more than happy to live up to his reputation as a diver – after every time he stuck the ball in the back of the net on the way to being named Player of the Year.

The start to the 1994/95 #PL season had its share of drama…#ThrowbackThursday pic.twitter.com/loQWB7HHQr

Right, let’s get this straight: English football has never enjoyed a greater two minutes than the 76-78 minute mark of England vs Scotland at Euro 96.

From David Seaman saving Gary McAllister’s penalty, to the ball being lofted upfield, to Gazza running from deep, to Gazza lobbing the ball over Colin Hendry, to Gazza volleying past Andy Goram, to Alan Shearer and Jamie Redknapp grabbing the Lucozade, to Gazza’s prone body and screaming red face getting drenched in the dentist’s chair, to the whole country believing football’s coming home.

Nothing about Peter Crouch’s appearance suggests ‘professional footballer’, let alone ‘avid body popper’ – but you really shouldn’t judge a book by its cover.

Not content with becoming England’s secret weapon in 2006, Crouch became a national hero thanks to his pissed-uncle-at-a-wedding moves.

After bringing back the robot to celebrate his 100th Premier League goal, Crouch said: “It felt a bit stiff to be honest. It’s been ten years, I think I’ll have to retire it. Weddings and parties only now!”

That calls for a robot celebration. pic.twitter.com/VKdL6gk1xy

Trademark celebrations are often symptomatic of a lack of imagination – see Shearer, Alan and Ronaldo, Cristiano – but you have to credit Keane for his commitment to amateur gymnastics.

This only got better as Keane got older yet continued to celebrate like he was still a giddy teenager.

In a world of media-trained players and anodyne interviews, a bit of personality goes a long way in football, and Bullard’s cheeky persona endeared himself to plenty of supporters.

“It was a fantastic celebration,” Brown admitted. “Great comedy is about timing.”

As if Rooney getting knocked out in a boxing match with Phil Bardsley isn’t funny enough, his response to public outcry after the video was leaked to the media was even more outstanding.

Rooney has divided opinion like few other players in recent years, but you had to doff your cap to him on this one.

Jack Grealish has missed a trick not doing the rooney boxing celebration after scoring #AVFC pic.twitter.com/5tQBIOvCmK

Already the hardest looking man in Glasgow, Brown could hardly have endeared himself better to the Celtic faithful by: A) scoring a beauty in the Old Firm derby, and B) celebrating in the face of El-Hadji Diouf – who infamously spat at Hoops supporters during a UEFA Cup tie in 2003.

“It was the best yellow card I have had in my life,” Brown went on to write in his autobiography.