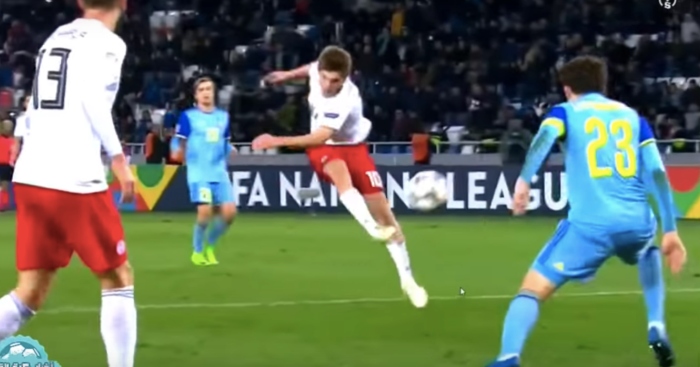 Georgi Chakvetaze has been linked with Tottenham Hotspur and Barcelona recently – and after watching him in Georgia’s Nations League win over Kazakhstan, we’re now desperate to see him in England.

The 19-year-old Gent winger has six goals in his last seven games for club and country, and his latest is one of his best yet.

While England fans might be focused on the top end of the UEFA Nations League, the competition has also given smaller nations a chance to shine.

After all, in normal circumstances, it’s unlikely you’d have been able to watch Georgia up against Kazakhstan on live TV in the UK, much less have it televised with no competition in the scheduling save for Andorra v Latvia in the same group.

So we should be grateful there was a chance to see a Chakvetadze masterclass, with the teenager first setting up Georgi Merebashvili’s headed opener and then scoring a goal of his own, cutting in from the left and powering a shot into the far corner beyond Dmytro Nepogodov.

Georgia topped their Nations League group by some distance, winning their group with 16 points from a possible 18 to earn promotion.

Chakvetadze found the net in four of those games, and it’s easy to see why we have seen interest from a few Champions League regulars.

A number of Premier League players have spent time at Gent before coming to England, with Mido, Bryan Ruiz and Laurent Depoitre among them, but watching Chakvetadze against Kazakhstan, it was hard not to think of another Georgian who lit up the Premier League: Georgi Kinkladze.

Manchester City being rubbish back then meant we only got to see Kinkladze in the top flight for a year before they were relegated – twice in a row – and though he would later return for a while with Derby County, there’s been a Georgian-shaped hole in the Premier League we’ve only just realised.

Temur Ketsbaia filled it for a while, but it’s fair to say Zurab Khizanishvili wasn’t quite of the same ilk. But you just watch Chakvetadze’s highlights from the Kazakhstan game and try to tell us he isn’t exactly what we didn’t know we were missing but definitely have been.