15 of the best stats, memes and reactions to Germany’s WC exit 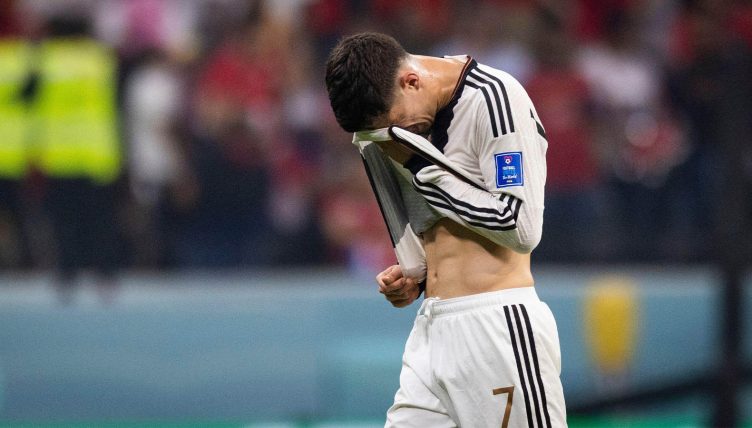 The World Cup delivered one of its biggest shocks yet last night as Germany crashed out of the competition by finishing third in Group E.

It is now the second consecutive time that Germany have been knocked out at the first hurdle. In 2018 they finished bottom of their group and had a miserable campaign.

Germany knew that they needed to get the job done against Costa Rica, but they were also reliant on other results going their way on the night.

While they managed to get the job done in the end against Costa Rica, Japan pulled off another shock by beating Spain and so managed to top the group in the process.

Despite finishing level on points with Spain, Hansi Flick’s side had a far inferior goal difference. The World Cup has delivered plenty of upsets so far, but this might be the biggest yet.

Flick admitted they made mistakes: “I don’t care about other teams because it is all up to us,” He admitted after the game. “If you look at the matches and the number of goals, it is our fault.

“I am convinced we had possibilities and chances in the (last) match against Spain to win, but you have to take those chances and score and then it would have been a different situation for us.

“There are so many reasons (for Germany’s exit), but I am not looking to find excuses. We did not have a lot of time to train, but it is not down to that. We fulfilled our duty today and went off the pitch with a victory, but the result could have been better.

“Honestly, we have just been eliminated, but if you know me and know my team, you know that we can get up quickly and recover from that. That is very important and very decisive for the future.

“In light of the 2024 European Championship, it is difficult to talk about that right after elimination. Now we need to assess our work here at the World Cup, head into a different direction, and this is the next step that we are going to undertake and we will do that very soon.”

We’ve gone through social media and picked out 15 of the funniest memes, reactions, stats and more.

Germany are out of the #FIFAWorldCup in the group stage!! pic.twitter.com/h3bFEYn1Pw

the world during those 3 minutes where both spain and germany were out pic.twitter.com/deMPPFbZ21

“That’s what Germany deserve after my goal didn’t count back in 2010 haha but no seriously, safe flight back lads.” pic.twitter.com/BTj6sybX4B

What goes around comes around 🤣 #Germany #WorldCup pic.twitter.com/7IXRPmgwsR

2 – Since detailed World Cup records began (1966), there are only two instances of a team losing a game despite attempting 700+ passes:

Most xG in the group stage —

Yet Germany are out 🙃😬

Japan when they got drawn into Spain and Germany’s group: pic.twitter.com/KE2vMEhhyw

Japan beating Germany and Spain but losing to Costa Rica is absolutely mental.

Ball over the line?

Ball in the same place in all 3 photos, as in #Japan vs. #Spain game this evening #FIFAWorldCup #JPNESP #JPN #ESP pic.twitter.com/Sneis6TGr5

How can this be the highlight of Germany’s tournament 💀pic.twitter.com/BjJplrlZu2

READ NEXT: 19 of the best stats, memes and reactions to England’s big World Cup win over Wales