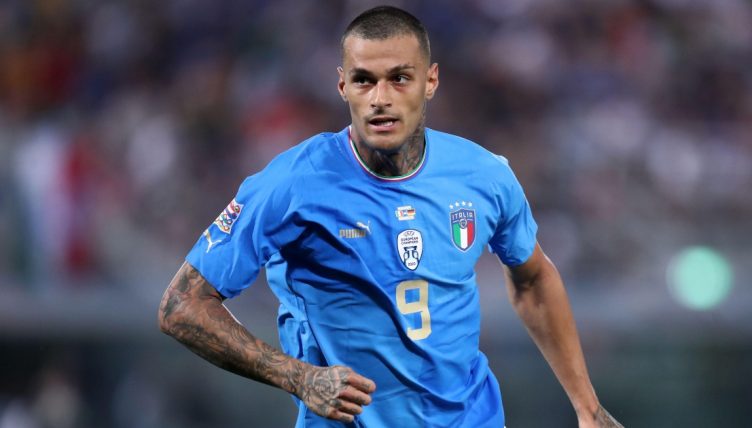 Sassuolo and Italy striker Gianluca Scamacca is poised to become West Ham‘s fourth summer signing as David Moyes looks to strengthen his Hammers squad – but how does he compare to the club’s current main striker Michail Antonio?

Scamacca has been in demand from a host of European clubs this summer and it is easy to see why; he is a 6ft 5in Italy international striker who scored 16 times in Serie A last season and possesses an eye for the spectacular.

“He has everything it takes to become a complete centre-forward,” says Italy manager Roberto Mancini. And Scamacca says he wishes to emulate the goalscoring feats of legendary Argentina forward Gabriel Batistuta.

West Ham have agreed to pay an initial £30.5million for Scamacca, with £5million in add-ons to Sassuolo. The 23-year-old has reportedly signed a five-year contract, plus the option of a further year in east London.

Despite qualifying for Europe for the second consecutive season, West Ham suffered from a lack of squad depth last season. Antonio was the club’s only senior striker and, even though he performed admirably, the Hammers were often predictable in their play.

That lack of depth could explain why David Moyes’ side slid from fourth to seventh in the Premier League while losing their Europa League semi-final to Eintracht Frankfurt.

The signing of Scamacca should allow Moyes to mix things up and West Ham fans, who love a maverick forward more than most, will be hoping their new Italian striker performs like club legend Paolo Di Canio.

But what are the chances of Scamacca making a positive impact at the London Stadium? When asked by Football Insider for his thoughts on the imminent arrival, former England international Paul Robinson said: “Moyes likes a target man. He will obviously be a big threat from set plays.

“Scamacca is a Moyes type of player. I think Moyes will improve him as well. Yes, he scored a lot of goals last season but there is areas of his game that can be improved.

“I think he [Scamacca] will fit in well at West Ham. It will be good for the fans to finally see a deal going over the line without weeks and weeks of speculation.”

Here, we’ve crunched the numbers and compared Scamacca’s Serie A stats during the 2021-22 season with Antonio’s corresponding Premier League numbers.