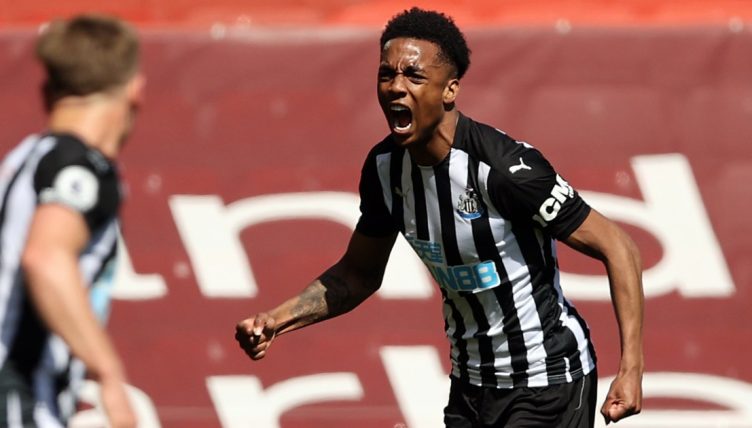 After struggling for game time in north London, Arsenal midfielder Joe Willock has impressed on loan at Newcastle, firing in five goals in 11 Premier League games.

Though he hasn’t always been in the starting line-up at St. James’ Park, Willock has performed every time Steve Bruce has sent him on from the bench, coming up with important late strikes against Tottenham, West Ham and Liverpool.

We’ve rounded up what has been said about Willock since Newcastle took him on loan in February.

“I think Joe’s thoroughly enjoying it here,” the Newcastle manager told the Guardian in April. “There’s a lot of conversations to be had but why wouldn’t we want to sign him? He’s 21, he’s young, fit, athletic, he can score a goal and he’s got wonderful pace. Arguably Joe is as quick as anyone at this club.”

“It was quite refreshing yesterday to hear Joe talking about driving out to the coast and seeing the sea. Living in London, I don’t think he gets to see the sea that often… And I certainly think he enjoyed the adulation of scoring the winner against West Ham last week.

“He’s got a big future. He’s the right type, the right profile – you’d love to build a team around a young player like Joe. If there’s a chance to bring him here next season, I’d love to get it done.”

“I don’t think it would be a mistake to let him go,” the ex-Arsenal striker told Football Insider. “He has got legendary status already in Newcastle because he has already scored some really big goals for them.”

“It is important for a player like him to play games, score goals and make a difference. That is what he has done up there. Fair play to the young man for making the move and then taking his opportunity. Can I see him playing for Arsenal? I do not think the chance is there anymore.

“He has got a God-like status at that football club which is great. Why would he not want to stay there next season?”

Arsenal boss Arteta clearly doesn’t agree with Campbell, or at least not entirely. When asked in April whether Willock will be able to prove himself at Arsenal, Arteta replied: “He has a chance. He is a player we really like so at the end of the season he will come back here and then we will make the decision again for what is best to move forward.

“He is a real threat in the opponent’s box, physically he can do anything you ask for and has got the right mentality, is good technically and he is English.

“We knew all this but he needed game time, he needed to expose himself away from our environment and we believe as well that Newcastle, Steve and his staff is the right place for him to do that.”

After that game, Wright told Match of the Day: “I’m delighted for [Willock]. He said to [Allan] Saint-Maximin, when he does break down the wing, cut it back as he’ll be there. That’s what he does.

“His athleticism, his desire to affect the game and he is a box-to-box player playing with freedom and playing like he is wanting to prove someone wrong.

“If you ask any player who has been released out on loan that is the first thing you go for. Prove people who have let you go wrong. He has done that over the last three months and he has been exceptional for Newcastle.”

Willock’s team-mate Wilson, who has spent much of the past few months out with injury, told NUFC TV that he was looking forward to playing alongside the Arsenal loanee: “It’s going to be exciting because it was his debut against Southampton I got injured in and he scored. He’s looked a real prospect for us and he showed over the last couple of weeks how important he is to the team.

“He’s been a great addition, he’s got a lot to give in the game and he’s quite mature for a young lad. He’s got his feet on the ground and he’s a good player. The world is his oyster to be honest, and adding him into the starting line-up would be a great addition.

“The boys who have been starting have done great, even though he’s been coming on and scoring vital goals. The manager has got a tough decision which is a nice thing to have, especially at this stage of the season. It’s an opportunity Joe wants to take, and the manager has got a decision to make.”

“You know what, I like Joe Willock,” Ferdinand said on his YouTube channel in April. “He’s someone at Arsenal that I would have kept.

“He’s a good young player. If Arsenal don’t take him back and have him around that squad… I don’t know, man. I really like him and I like his personality.

“He’s not shy to come on the big stage and play and perform. And the last three goals he’s scored have been massive goals for Newcastle. It shows he’s got the temperament.”

After Newcastle’s 4-2 win at Leicester in May, which was Willock’s first start since Newcastle’s 3-0 defeat to Brighton in March, Willock revealed he had been asking the manager for another chance to prove himself across 90 minutes.

“I’ve come off the bench a few times and scored,” he said. “So I was knocking on the door and I told the manager I needed to start and he believed in me and put me in and hopefully I repaid him.”