17 of the best & worst Panenkas ever: Aguero, Zidane, Pirlo, Hakimi…. 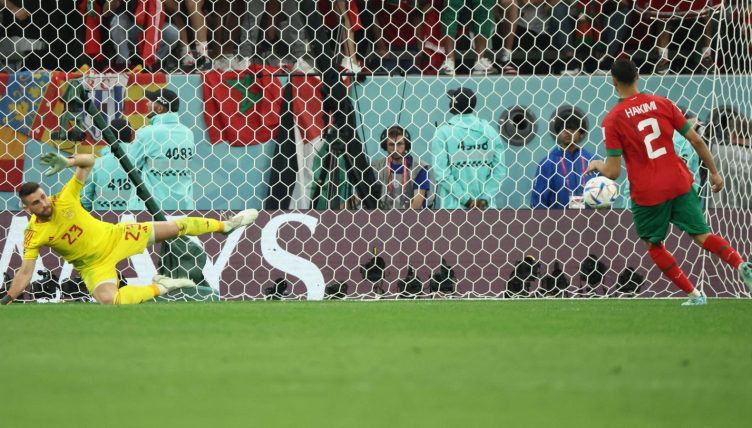 A Panenka penalty requires plenty of skill, composure and, most importantly, b*llocks – as the likes of Andrea Pirlo, Francesco Totti and Sergio Aguero have all found out to varying degrees of success.

On June 20, 1976, Antonin Panenka gently chipped the ball into the back of the net to score the decisive spot-kick as Czechoslovakia beat West Germany in the European Championship final.

And we’re looking back at some of the best and worst attempts at recreating the penalty, which can make a player look effortlessly cool or hilariously foolish.

The original, the ultimate, the greatest, Panenka had been working on this technique for a while – but it still took balls to try it when presented with the chance to win Euro 76 for Czechoslovakia, in the first ever penalty shootout in a European Championship final.

Panenka told UEFA’s website: “After each training session I used to stay behind after a game with our goalkeeper and take penalties – we would play for a bar of chocolate or a glass of beer.

“Since he was a very good goalkeeper it became an expensive proposition for me. So, sometimes before going to sleep I tried to think of ways of getting the better of him, to recoup my losses.

“I got the idea that if I delayed the kick and just lightly chipped it, a goalkeeper who dived to the corner of the goal could not jump back up into the air, and this became the basis of my philosophy.

“I started slowly to test it and apply it in practice. As a side effect I started to gain weight, because I was winning the bets.

“I started to use it in friendlies, in minor leagues, and eventually I perfected it so I used it in the main league as well. The culmination was when I used it at the European Championship.”

Probably the second most famous Panenka of all time.

Carrying the hopes of a nation in the World Cup final in his last ever match before retiring and with Gianluigi Buffon standing between the ball and the goal, Zidane still had the chutzpah to chip the ball straight down the middle, creating even more suspense by hitting the underside of the bar.

Thank God that was the only drama he was involved in that night. Oh, right, yeah…

Forget undermining Maurizio Sarri, the real tragedy of Kepa’s pantomime refusal to be substituted in Chelsea’s League Cup final was that it completely overshadowed a brilliant performance from Hazard.

After producing an outstanding display over 120 minutes, Hazard stepped up to take Chelsea’s fifth penalty knowing a miss would hand City the victory.

Not only that, Ederson had a few choice words to try and put the Belgian off, only for the sweet prince to respond by doing this…

This came in a World Cup quarter-final. After Luis Suarez had handballed on the line to prevent a Ghana winner in the last minute of extra-time and Asamoah Gyan then missed the subsequent penalty, it’s fair to say the Africans would have been feeling a bit hard done by.

Abreu certainly wasn’t in the mood to show mercy, though, the man they call El Loco ending Ghana’s hopes in the coolest way possible.

“What adjective did you use to describe Zidane’s penalty?” he asked afterwards. “Crazy? No, magic. So why not Abreu?”

Joe Hart, with the preening arrogance of the biggest kid in the playground, tried his best to put off Pirlo when England’s quarter-final with Italy at Euro 2012 went all the way to penalties.

Pirlo, with his typical grace and a hint of a smirk, left the goalkeeper sprawled on the floor, twisting like a distressed seal.

But the midfielder has remained understated about his moment of class, writing in his autobiography: “I made my decision right at the last second, when I saw Joe Hart, the England goalie, doing all sorts on his line.

“As I began my run up, I still hadn’t decided what I was going to do. And then he moved and my mind was made up. It was all impromptu, not premeditated. The only way I could see pushing my chances of scoring close to 100%.

“There was absolutely no showboating about it – that’s not my style.”

Ramos has established himself as the Panenka king, and it all started with this one in a Euro 2012 semi-final against Portugal.

Speaking in November 2018 after Ramos had scored yet another chipped penalty, Panenka said: “I do think that he can be my best ‘impersonator’, the one who takes the best Panenka penalties out there.

“The most impressive part is that he has already done it several times and the people know he can do it again, and yet he still manages to pull it off. It’s a work of genius.”

Its been 3 years since Sergio Ramos's famous 'panenka' penalty against Portugal in the semi-finals at Euro2012. pic.twitter.com/vsM9ayLjPD

This was a long way from being the perfect Panenka penalty, but it went in and won Chile the Copa America so Sanchez probably wasn’t too bothered.

This one from Ramsey, in Wales’ 1-1 draw with Serbia in June 2017, was notable because it was scored at the Rajko Mitic Stadium, the ground where Panenka had made the technique so famous in the first place.

Not even Pirlo gets it right every time.

At least he saved his bloopers for when it didn’t really matter, having his bluff called by Jose Pinto in a friendly against Barcelona in 2010.

Like Pirlo, it really hurts us to admit that Totti did not always get things right. Similarly, like Pirlo, he at least got it right when it mattered, with his Panenka against Edwin van der Sar helping Italy beat the Netherlands at Euro 2000.

Bu this effort against Lecce was a stinker. And Totti’s face says it all.

Then it was a reminder that England will always be doomed when it comes to penalties. He still scored a hat-trick though, and we still absolutely love him.

Trailing Sir Bobby Charlton’s England goalscoring record by one, Lineker was presented with the perfect opportunity to become his country’s joint-top goalscorer when the Three Lions were awarded a penalty against Brazil in 1992.

But in his final appearance at Wembley, Lineker completely fluffed the chance. Speaking afterwards, he said: “I saw the goalkeeper commit himself early and tried to lift the ball over him…but I scuffed up some grass as I shot and couldn’t get any height.”

Graham Taylor was much less apologetic, commenting: “You could argue that we played Brazil with 10 men.” Ouch.

It’s never a good sign when you’re team-mates are coming out post-match to make clear they haven’t killed you… yet.

“He has apologised so we will brush it under the carpet and move on,” were the words of Fulham midfielder Harrison Reed after Lookman spurned the chance to earn the Cottagers a crucial draw at West Ham with the last kick of the game.

Tom Cairney echoed the sentiment of Reed, but something tells us some stronger language may have been used after this.

Mitrovic had already scored once for Serbia when he was handed a great chance to add another. It did not go well.

“I have no idea why I’ve done that,” he said afterwards. “I was watching [Memphis] Depay [score a Panenka] yesterday and decided at the last moment. I am stupid!”

Aguero had the chance to double Manchester City’s lead against Chelsea but was left red-faced after his cheeky penalty attempt was comfortably saved by Edouard Mendy.

The Blues then turned the game on its head to seal a 2-1 win, delaying City’s Premier League title-winning party.

“I would like to apologise to my team-mates, staff and supporters for missing the penalty,” Aguero tweeted after the game. “It was a bad decision and I take full responsibility.”

Stoppage time. This to win it. This for the hat-trick… Oh, mate.

Denied the hat trick and stoppage-time winner from the penalty spot. pic.twitter.com/Ov6zbnOiyh

Imagine you’re one kick away to sending your nation further than they’ve ever been in the World Cup.

Born in Madrid he knocks Spain out!! 🇲🇦🇪🇸

Achraf Hakimi wins the penalty shoot-out with a panenka to see Spain out of the competition! 😲#ITVFootball | #FIFAWorldCup pic.twitter.com/QWWynN6821