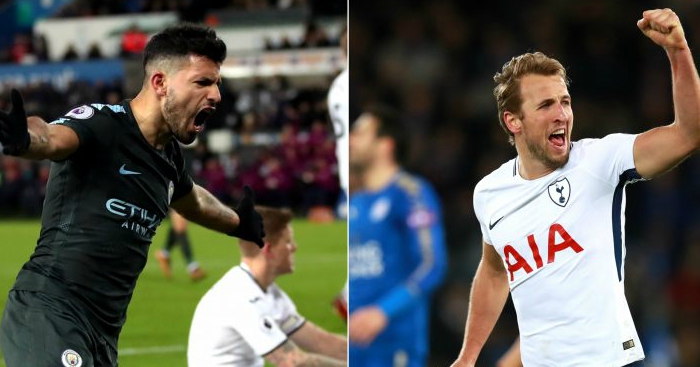 Manchester City host Tottenham in the Premier League’s evening kick-off on Saturday, with all eyes on two dangerous attacking sides.

Aguero was on target as City maintained their unbeaten record in the Premier League with a comfortable 4-0 win at Swansea on Wednesday, but come up against a Spurs side back on form after a rocky November.

With two free-scoring sides meeting at the Etihad Stadium, we’ve taken a look at how the two hitmen compare when it comes to the numbers.

In all competitions, Kane leads the way with 18 goals from 21 appearances this season, Aguero having scored 13 in 18.

However, the stats suggest the Argentinian is much more clinical in the Premier League, averaging a goal every 95.6 minutes compared to Kane’s one every 116.3.

Across the Premier League and Champions League, the pair have a similar record. Aguero averages a goal every 99 minutes, while the Spurs striker scores once every 100.7 minutes.

Three of Aguero’s Premier League goals have, however, come from the penalty spot, while Spurs are yet to be awarded a spot-kick this term.

Both players have registered three assists this season, with all of Aguero’s coming in the Premier League. Two of Kane’s have come in the Champions League.

In terms of shot accuracy, the Argentinian is once again higher, hitting the target with 43% of his 46 shots, while 37% of Kane’s 97 attempts have been goalbound.

The England international, however, has averaged a shot on target 2.3 times per 90 minutes he has played, with Aguero recording 1.9.

According to Opta, the City striker has missed nine “big chances” so far this season, whereas Kane has missed seven.

Perhaps unsurprisingly, given City’s style of play, Aguero has completed more Premier League passes than Kane despite appearing in fewer matches. He averages 27 passes per 90 minutes compared to the Spurs man’s 18.3.

The Argentina international also creates more chances per 90 minutes, with 1.9 to Kane’s 1.1.

Aguero is only caught offside an average of 0.4 times per 90 minutes played though, with Kane much higher at 1.4.

Kane leads the way in terms of tackling, completing a successful tackle once every 139.6 minutes, compared to Aguero’s one every 191.2 minutes.

The England striker has made just one interception all season, while Aguero has made four in the Premier League as well as three in the Champions League.

Again with perhaps little surprise, the Manchester City man has engaged in far fewer aerial battles so far this season, challenging for just 12 balls in the air compared to Kane’s 57.