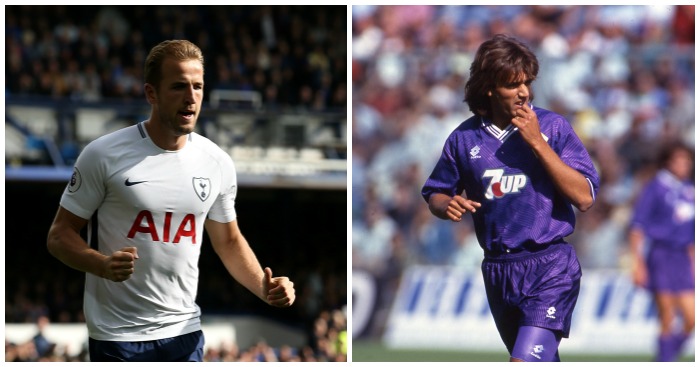 Harry Kane earned high praise from Mauricio Pochettino over the weekend when the Tottenham manager compared the striker to Argentina legend Gabriel Batistuta.

And Pochettino says the England international can be even better than his former team-mate Batistuta, who was one of the deadliest goalscorers in the history of the game.

“Batistuta was a killer, a strong mentality, a strong shot,” Pochettino said. “I put Batistuta higher, but Harry can be better. Harry is a killer, too. Look at his scoring in the last few seasons.”

We’ve taken a look how Kane’s stats compare to Batistuta’s at a similar age to see just how much the comparison holds up.

Kane, who turned 24 in July, surpassed the 100-goal landmark for Tottenham with his brace against Everton on Saturday.

In total, he has scored 117 goals in 234 appearances at club level, with 80 of those coming in the top flight. Overall the striker has scored a goal every other game on average at club level, while in the Premier League alone it stands an impressive 0.68 goals per game.

His record in top-flight leagues reads 49 goals in 124 appearances – again, his goals per game rate of 0.4 being inferior to that of Kane’s.

Can we all just have a nice stare at this picture of Gabriel Batistuta for a little while?😍😍 pic.twitter.com/PXu4bQfUMS

Kane has established himself as England’s first-choice striker over the past two seasons, and his double against Malta means his tally now stands at 10 goals in 21 caps, just short of a goal every other game.

Batistuta, however, is one of the most prolific strikers in the history of the Argentinian national team and by the end of 1993 had scored 18 goals in 32 caps, an improvement on Kane at 0.56 goals per game.

One crucial difference is that Batistuta had already scored nine goals in major tournaments, the 1991 and 1993 Copa America championships, whereas Kane drew a blank at Euro 2016.

Despite Tottenham being one of the most impressive teams in England under Mauricio Pochettino, Kane is yet to lift the maiden trophy of his career.

Batistuta, meanwhile, had already won a host of honours. At both River Plate and Boca Juniors he had become an Argentinian champion, while he had also won the aforementioned Copa America tournaments, as well as the 1992 Confederations Cup and the 1993 Artemio Franchi Trophy, when the La Albiceleste beat Euro 92 champions Denmark on penalties.

Though Kane has failed to lift any silverware, the forward has enjoyed a fairly decorated career individually.

Batistuta ended his career with a host of individual accolades but at Kane’s age had only finished as the top scorer at the 1991 Copa America and 1992 Confederations Cup.