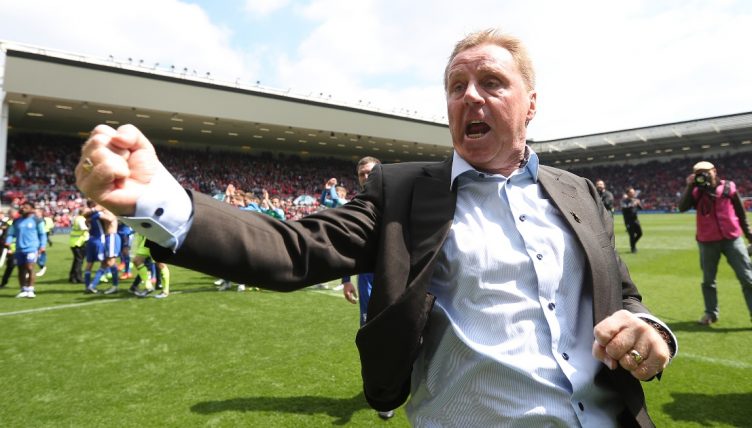 Harry Redknapp certainly knows how to tell a good story after over 20 years in charge of the likes of West Ham, Tottenham and Portsmouth.

The manager has presided over seven clubs in England, so it’s no wonder he’s been privy to plenty of ridiculous incidents.

We’ve looked back at some of ‘Arry’s most triffic stories.

Redknapp managed West Ham from 1994 to 2001 and in that time, he encountered some players with very unique temperaments. Most notably, a certain Di Canio.

The manager made a move for the hot-headed Italian in 1999 for £1.5 million after the striker had completed a suspension for shoving referee Paul Alcock while playing for Sheffield Wednesday.

But Redknapp had to pull out all the stops to keep Di Canio happy during his time at Upton Park, asking his players not to hurt the forward in training, otherwise it would end in a huge fight.

“He was high maintenance, but he was a genius,” Redknapp told Betsafe.

“He was a fantastic player and I used to make sure I put him on a team in training where nobody would kick him, like Stuart Pearce, Nigel Winterburn, or Steve Lomas, players who loved a tackle.

“If someone kicked him it would all blow up and they’d all have a row. He was volatile, very temperamental, so I used to make sure I put on the right team.”

“He’d kick one wide and I’d used to say it was a goal. It’s Paolo. Got to keep him sweet for Saturday.”

During his short period at West Ham, Ruddock told Redknapp he would be unavailable for an upcoming fixture as he was ill.

But the former Liverpool man was soon caught red-handed by team-mate Mike Newell at Gleneagles golf club, where the two had a reported bust-up.

Redknapp fined the player two weeks’ wages, but Ruddock wouldn’t let the matter rest and took the case to a tribunal.

Ruddock won the case, but Redknapp had the last laugh.

He wrote in his book, It Shouldn’t Happen To A Manager: “[The] barrister turned to Dave Richards, who was chairman of the Premier League and on the FA’s board and said, ‘Thank you Mr Richards, I’m afraid I don’t come cheap,’ and he handed over a bill for £30,000 to Dave Richards, who said, ‘This is not a court of law, we don’t cover costs.’

After Fabio Capello left his role as England manager shortly before Euro 2012, Redknapp seemed in pole position to land the country’s top job after impressing with Tottenham.

Roy Hodgson was ultimately hired by the FA in a surprise move which made for some awkward situations with Redknapp’s friends.

“A friend of mine owned a golf shop and he brought a birthday present around for me in a box, him and his son,” Redknapp told Betsafe.

“He said, ‘Harry, you can’t open this until we tell you, I’ll ring you when you can open it.’ So anyway, nothing happens, I don’t get the phone call to open the box, they looked like a pair of shoes, they were in a shoe box, quite heavy.

“‘Harry, there’s been a bit of a mix-up. You can open the box but they’re a pair of golf shoes in England colours with a little England badge on.'”

The friend later sent Redknapp a pair of Tottenham branded shoes in an attempt to atone for his gaffe. Sadly, Redknapp left Spurs later that summer.

“I said to him no matter what you do, don’t give me any more golf shoes.”

While in charge at Portsmouth, Redknapp had to cut down his squad and singled out Benjani, a player who “could bring down a plane” with his wayward shots in training, for a move away.

Manchester City came calling, and with all parties happy, the move was held up by one man: Benjani.

The striker didn’t fancy it, and after deliberately missing two flights to Manchester, Redknapp drove to Southampton airport and “had to push him onto a plane”. The move was completed, in true Redknapp style, on deadline day.

While managing Bournemouth, a young prospect turned up and requested a try-out, insisting that he should be playing for the side.

Redknapp asked him to turn up the next day and said he would give him a run out with the other players.

The prospect showed up and looked out of breath, saying he had been waiting to cash his giro payment to purchase some football boots.

Redknapp, however, soon ran out of sympathy for his new prospect.

“I took pity on him and started kicking some balls,” he wrote in his book It Shouldn’t Happen To A Manager. “The first one bounced off him and the next two he kicked like he’d never seen a ball in his life.

“They went like a banana back towards the car park. I said, ‘Stop, don’t kick the ball anymore, let’s give those boots a wipe down. Take them straight back to the shop and get your money back.”

Frustrated supporters often suggest they could do better on the pitch than some of their underperforming players, and so Redknapp put that to the test and subbed on West Ham fan Steve Davies in a friendly against Oxford United.

“He had West Ham tattoos all up his arms, he had West Ham earrings, anyway, he won’t leave me alone and at half-time I made three substitutions, so had no more subs.

“And suddenly I get an injury after 10 minutes so I only have 10 men, so I turned to the fella who had been giving me grief and said, ‘Can you play as good as you talk?’ He said, ‘I can play better than that Chapman.’

“Anyway, he came on,” continued Redknapp. “He played up front and scored a goal, and to be honest, he was better than Chapman!”

At Pompey, many of the players were religious and had their own prayer room which they’d go into before a match.

“It was actually Kev, the kit-man’s room,” Redknapp explained.

But one day before an encounter against Manchester United,  Redknapp suggested that he might have to join his players.

“I took the team sheet and I’ve come back in the dressing room and Joe Jordan was in there and there was only about three players sitting there.

“I said, ‘Where have the players gone?’

“He said Linvoy Primus is using the boot room as a prayer room before the game, they all go in there and say their prayers.

The towering striker is best known for his time at Arsenal, where he became known as one of the Premier League’s best super subs for the Gunners.

Redknapp signed the Nigerian for Portsmouth in 2006, and he went on to score the winning goal in the 2008 FA Cup final. Kanu’s attitude however, wasn’t the best.

“The most common thing I’d get from Kanu was a message every Monday morning with the exact same message, that at some points it felt pre-recorded.

“Boss, the King cannot come into training. I have an upset stomach.”

Facing Bradford City in 2000, West Ham were losing 4-2 and their cult hero had three consecutive penalty appeals turned down by the referee.

As a result, Di Canio stormed off the pitch and sat down by the touchline, demanding to be substituted off the field.

“Paolo, get up,” Redknapp recounted to Betsade. “Play on, get up. We’re losing 4-2 to Bradford. Get up. Please, Paolo.

“I couldn’t tell you my actual language on film, but I was getting a bit animated with him and eventually he gets up.”

Whatever Redknapp exactly said must have worked, judging by what happened next…

Assou-Ekotto is one of the famous few players who’ve openly admitted that, to them, football is just a job, and their affection for the sport runs no deeper than their next paycheck.

The defender, however, still played over 200 games for Tottenham between 2006 and 2015 before moving to QPR.

When Redknapp was managing Birmingham City in 2017, he attempted to sign the player, only for the deal to hit an unlikely snag.

“Maybe I can get another year out of him before he decides to do that. What a good player. He could well end up in the Birmingham colours next year, Benoit.”

We should probably point out that the player has since refuted the claim.

Redknapp bought Pavlyuchenko from Spartak Moscow in 2008, but the player struggled to settle at Tottenham.

It wasn’t that Pavlyuchenko wasn’t good enough, it was that the striker didn’t know how to speak English.

“We were out having a practice match, and suddenly I shouted at Pav to bend his runs or whatever,” Redknapp told BT Sport in 2016.

“And suddenly this guy on the touchline sprinted onto the pitch to tell Pavlyuchenko what I was saying.

“After about eight times he had run on, I realised that he worked harder than Pavlyuchenko.”