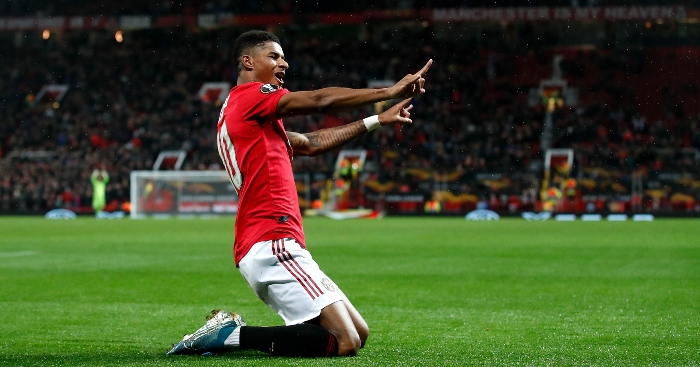 After a couple of difficult years, Marcus Rashford is stealthily coming into his own as a Manchester United goalscorer.

The academy product is still just 22 years old but has 10 goals in 18 games already this season – an improvement even on the numbers he posted in the same number of games in his breakthrough season – and is closing in on his record tally of 13 (from 47 games in 2018-19 and in 52 games the year before).

The England striker has been hitting his groove over the last 12 months, having scored nine of his 13 goals last season under Ole Gunnar Solskjaer. Here’s what his manager – and many others – have said about him.

“He can become a top, top one. We can talk about Harry Kane and his class, and I’m sure Marcus has got the potential to get up there.”

“He has got a bit of everything. He is quick, he is strong. The only thing he could probably work on is his heading.”

“His movement in the box was great and he could be a very positive surprise for Manchester United on what I’ve seen.”

“He’s still young. Players have to develop. United have to make a decision – they have to buy, but not necessarily at the expense of Marcus Rashford.”

“You look at Cristiano Ronaldo’s record and players like Neymar, he has that kind of ability. It is a lot to live up to, but he has that in him. He can be a world star.”

“Rashford can make himself Manchester United’s centre-forward – they don’t need to go and buy anyone else, he’s your centre-forward that can take you to a title or a Champions League.”

“Rashford has something redemptive about him, a quality that goes against the chaos and dissolution of the post-Fergie years. He rebuts, to a degree, the narrative of doom and decay, of a club being stripped away of all that is good…”

“Marcus Rashford, at 22, is their main man. He is the go-to man for their goals.”

“I’ve said before he’s obviously got a huge talent – he’s shown that. What I like about him, and what’s good for him, is his attitude and he’s learning all the time – and he’s willing to take things on board.”

.@ManUtd's Marcus Rashford surges up to second in the U21 player form rankings after his man of the match display in their 3-3 draw with Sheffield Unitedhttps://t.co/BwvcOJPEus pic.twitter.com/nEQMcs4ETL

“He is still a long way from the finished article, like most 22-year-olds, but he is the most likely of the current squad to become what all emerging teams need: a talisman”

“Marcus is a fabulous young talent. I love the way he plays. I have never understood this whole nonsense that he doesn’t look calm in front of goal. For me he was the polar opposite of that.”