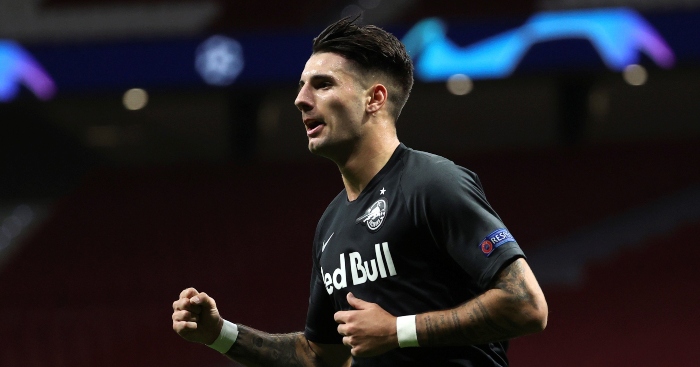 Arsenal have been heavily linked with a move for Red Bull Salzburg’s Dominik Szoboszai as they look to bolster their attacking options.

Szoboszai is the latest Salzburg player to attract the attention of Europe’s elite clubs and looks set to follow in the footsteps of former team-mates Erling Haaland and Takumi Minamino by making a big-money move elsewhere.

We’ve compiled five quotes on his unique talent from those who have worked closest with him.

By becoming a professional footballer, Szoboszlai followed in the footsteps of his father who played in Hungary’s top division.

“As soon as Dominik started to walk, he was given a ball,” Zsolt Szoboszlai told First Time Finish in 2020. “He’d come to watch my games and he seemed to have fun with it.

“If he wasn’t in school, he was on the training pitch.”

Szoboszlai first came to international attention when he was named on The Guardian’s ‘Next Generation’ shortlist in 2017.

“He’s a tall, languid, classy talent who is adept behind the striker or as a deep-lying midfielder,” journalist Tomaz Mortimer wrote in the Guardian.

“He has almost Toni Kroos-like qualities – brilliant ball-striking ability with both feet, a great range of passing, beautiful balance and a really high footballing IQ.”

The Red Bull Salzburg sporting director oversaw Szoboszlai’s move to the club in 2018 and was immediately impressed by the midfielder.

“He came to FC Red Bull Salzburg as a very young player,” Freund told First Time Finish in 2020. “At the time, he was full of talent and he also had a lot of self-confidence.

“In this age, you have to learn a lot to arrive in professional football. So the matches for our cooperations club FC Liefering helped him a lot to improve his skills and also his mentality to became the player, he is now.

“He’s now one of the most interesting young players in Europe.”

Rossi, manager of the Hungarian national team, has also been effusive in his praise for Szoboszlai.

“I know him very well and if I were in a top club I would sign him,” Rossi told Tuttosport in November 2020. “In the past, there were talks about Juventus and I know for sure that Lazio, Milan and Napoli wanted to sign him.

“Szoboszlai is a midfielder who makes assists and scores goals. He can play centre midfielder or behind the main striker. At Juventus, he would be ideal as a back-up to Aaron Ramsey. We are talking about one of the top ten talents in Europe.”

Szoboszlai just casually walked it in, what a day for Hungarian football 🇭🇺🇭🇺🇭🇺🇭🇺 pic.twitter.com/pIaWEegLUd

Perhaps the most important quote comes from the player himself…

“A lot of people say that my style of play is close to Sergej Milinkovic-Savic and Toni Kroos. It is a great thing to hear that,” Szoboszlai told Goal in 2019.

“There has been a lot of speculation recently [about my future]. Of course, it is a huge honour to be linked with giant clubs like Juventus, Bayern or Arsenal, but at this stage of my career, I only focus on my current duties and my development at Salzburg.

“I am part of a great club and a very successful team. My goal is to earn a regular spot in the midfield. Everything else can only come after that. Every player wants to play in one of the top leagues and the Champions League one day.

“I am not an exception, but there is a lot of work ahead of me to achieve that. I am in a good way, but the journey has only just begun.”

Forget Mesut Ozil, Arsenal have their new pre-assist king on loan at Swindon