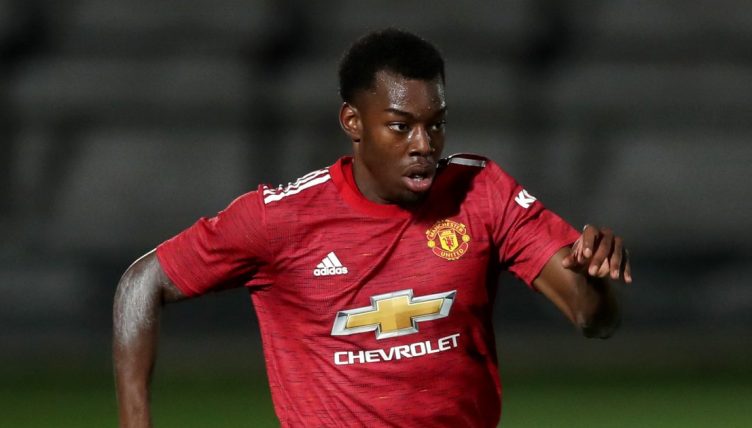 Manchester United are renowned for producing excellent prospects in their academy. Anthony Elanga is the latest talent from their conveyor belt.

Elanga has travelled with the United squad for their Europa League quarter-final against Granada and could become the latest player to debut under Ole Gunnar Solskjaer.

We’ve brought you the lowdown on the highly-rated teenager.

Son of former Cameroon left-back Joseph Elanga, Anthony was born in Sweden in April 2002, moving to England with his family in 2013.

He initially caught the eye playing for Sunday League side Hattersley FC before joining United’s Under-12s.

After netting seven goals in nine games for the Under-18s in 2019-20, Elanga won United’s prestigious Jimmy Murphy Young Player Of the Year award.

He is yet to make his competitive debut for the first team but came on as a second-half substitute in the pre-season friendly against Aston Villa in September 2020.

The 18-year-old made the permanent step up to the Under-23s this season and chipped in with six goals and two assists in 12 Premier League 2 appearances before suffering a collarbone injury in January 2021.

He signed a new long-term contract at Old Trafford in March 2021 and was then added to their Europa League squad a few weeks later.

Elanga is also capped at Under-17 level by Sweden, making five appearances and scoring two goals.

Elanga predominately plays on the left wing for United’s Under-23s but has also been used on the opposite flank and through the middle as a No.9.

Renowned for his blistering pace and brilliant skill, the winger causes problems for full-backs with his ability to take players on, but he can also cut inside and shoot on his stronger right foot.

While fellow academy graduate Marcus Rashford currently has the starting role out on the left flank, he has been struggling with injury problems this season, which could give Elanga a chance to stake his claim in the first team.

– “You look at the likes of Mason and Rashy, there is a pathway there,” Elanga told the PA news agency in November 2020. “It just shows you that if you’re willing to put the work into it and continue to work hard day in, day out in training there’s a pathway for you there.

“Obviously we’ve got a manager in Ole trusting the youngsters, so there’s a pathway there and I’ve just got to keep working hard.

“I’m putting the work in day in, day out. If I continue the way I am, continue to work hard, hopefully there’s a pathway there.

“I am always going to get better. In training, I’m always working hard and the way that I train is the way that I play. You can see that in the results and I’m just happy at the moment, I’m enjoying my football.”

– “My dad used to play with him [Samuel Eto’o] and always said he was an example to look at, the way he was on the pitch,” Elanga added.

“We play similar positions – he used to play left striker or right wing – and Thierry Henry used to do the same, so probably the two people that I used to look up to growing up.

“My dad is the reason why I fell in love with football, really. I remember watching him. He was a left-back. He was quick – obviously I’m quicker! – but he was a really good player.”

– “Thierry Henry was my idol and I tried to match my game with his,” Elanga told The Athletic in October 2020. “He was quick. He could play anywhere across the front three – striker, left wing, right wing – and that’s how I want to replicate my game.”

– “Anthony will be in the squad, he’ll be on the bench,” Solskjaer said ahead of United’s game against Granada in April 2021. “He has impressed when he has been in training with us.

“He was very unlucky two or three months back when he got a bad injury and he’s worked really hard to come back because he was just due to move into the first-team squad back then.

“He’s got an X factor, some attributes, it’s not like a gift, but he’s got the acceleration, pace, speed, that’s a given for wingers and he’s got qualities I like.

“He’s a goalscoring winger, he’s confident, he likes to beat men, right foot, left foot, he’s got a great attitude. His appetite and hunger to improve and when he’s been training with us the while he’s been here now he’s not been fazed by it, he’s confident.

“He’s not just there for the experience, he’s ready to play a part if he has to.”

“Off the pitch, Anthony is extremely dedicated and always puts in the maximum effort, whether that is in his education, training or recovery work, and that is exactly what we want to see from our young players.

“On the pitch, he has become more consistent, regularly showing his pace, flair and finishing, while also improving his work rate.”

– “Anthony has got to concentrate on the Under-23s. He’s got explosive pace, he’s willing to run in behind and tactically he’s very aware on and off the ball,” Under-23s manager Neil Wood told the Manchester Evening News in September 2020.

“What you see there is a boy that sees the light of the first team and wants to get there and he’s going to work every day to try and get himself in it.”

– “Anthony’s one of the hardest workers we have,” Neil Wood told The Athletic in October 2020. “He’s desperate to improve, desperate for knowledge. He watches videos of all the top players, he wants to learn from all the top players and he’s the first to do extra work after training.

“You can see the endeavour and work rate, we just need to tidy him up with his control and combination work around the edge of the box. We need him to produce a goal or assist when he gets into dangerous positions.

“He knows he has to be a little calmer in those situations, and that’s an ongoing process, but he’s always willing to take on information. He’s a player who you can sit down with and have a really good chat about his football.”

– Gary Neville labelled Elanga a “nightmare to play against” and described his goal as “Thierry-Henry-esque” while co-commentating on United Under-21s 6-0 win over Salford City in the EFL Trophy in September 2020.