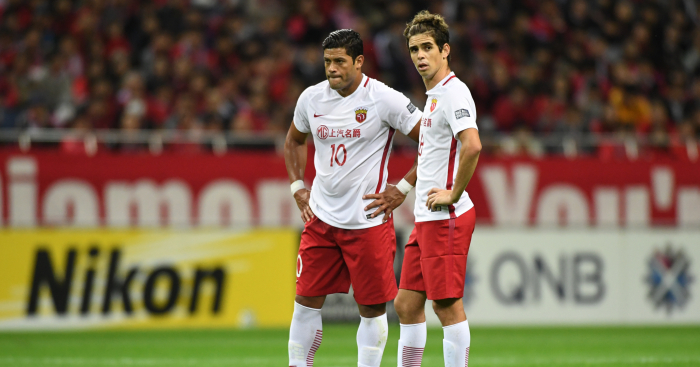 The Chinese Super League has become an increasingly lucrative destination for many of Europe’s big names – but how have they fared since moving to the competition?

An influx in wealth in the competition has seen a number of well-known players leave or snub moves to clubs in Europe to instead head to China.

We’ve taken a look at how 23 players who used to play in some of Europe’s biggest leagues are faring in the Far East.

Despite spending the last two years at Beijing Guoan, a club which has failed to challenge for honours during that time, Augusto has remained a favourite of Brazil manager Tite, scoring in the Selecao’s 2-1 defeat to Belgium in the World Cup quarter-finals.

The midfielder also helped convince Oscar and Hulk to move to China, although he has encountered a couple of problems, telling Goal in 2017: “Everything here is almost perfect except for the smog. The only problem is the Chinese food to which I am still slow to adapt!”

As far as we know, Ighalo has not recreated that celebration with Harry the Hornet while playing for Changchun Yatai, so we’re not interested.

Were it not for an untimely knee injury, Soriano could have found himself a Barcelona regular, having scored 37 times under Luis Enrique for the Catalan giants’ reserve side in 2010-11, only for fitness issues to halt his progression into the first team.

The striker went on to spend five prolific years at RB Salzburg, including a couple of 40+ goal seasons, before joining Beijing Guoan in 2017.

Now 33, he has picked up where he left off in Europe, bagging 19 goals in 20 appearances last season and a further 11 in 14 so far this term.

Viera waved a sad goodbye to Las Palmas – his hometown club who he had played for in two spells and helped to promotion to La Liga – in February 2018 when he joined Beijing Guoan.

The attacking midfielder, who became a senior Spain international in 2017, admitted the transfer “fixed the life” of his family’s future, while Las Palmas president Miguel Angel Ramirez said: “What we cannot do is to ruin the life of one of ours.”

Las Palmas retain an option to re-sign the 28-year-old if he leaves Beijing, where he has scored 10 goals and provided 10 assists in 22 appearances.

Every summer Gaitan was seemingly heading for Manchester United from Benfica, only for Atletico Madrid to sign the winger in 2016.

After less than two years at Atleti, Gaitan joined Dalian Yifang – the two clubs linked by the investment arm of Wanda Group – alongside Yannick Carassco.

Their debuts for the club could have gone better, suffering an 8-0 defeat at Shanghai SIPG.

In a clash with Beijing Guoan, Carassco had to rush to the aid of Gaitan after his team-mate had been knocked unconscious from an elbow, with the Belgium international making sure he could not swallow his tongue.

He’s yet to need Gaitan to return the favour, which means he’s probably faring slightly better in China.

One of the big winners from a move to China, Paulinho’s form for Guangzhou Evergrande saw him earn a move to Barcelona and establish himself in Brazil’s starting XI.

After winning La Liga and the Copa Del Rey before returning to China with Guangzhou, who also have Jackson Martinez out on loan.

Having achieved more or less everything in football, including tearing his own anus, Mascherano left Barcelona in January to join Manuel Pellegrini’s Hebei China Fortune.

Pellegrini left to join West Ham in the summer, meaning Mascherano is now under the guidance of Chris Coleman. A move to River Plate is now on the cards, according to Mundo Deportivo.

Perennially linked with a move to the Premier League throughout his career, Lavezzi has spent the last two years at Hebei China Fortune.

The forward failed to score in 10 appearances during his first season at the club but bagged 20 in 27 last term.

His time in China has, however, been overshadowed by accusations of racism.

Once a target for Liverpool, Teixeira ultimately left Shakhtar Donetsk for Jiangsu Suning rather than Anfield two years ago.

The attacking midfielder enjoyed a positive debut campaign, but his form dipped the following year and reports even suggested Teixeira had been transfer listed.

Now 28, his form has recovered this term with 10 goals and three assists in 22 appearances.

The former Chelsea midfielder has spent two years at Jiangsu Suning, but his time at the club is almost certainly heading for an unhappy ending.

A Chinese record signing at the time of his £25million move, Ramires was sent off on his debut for Jiangsu and currently finds himself banished in the club’s reserve team.

The Brazil international was expected to rejoin former club Benfica after he was not registered for this season’s CSL campaign due to a change in the foreign-player policy, only for the move to break down and Ramires to be left in purgatory.

Leaving Southampton for Shandong Lueng in 2016 saw Pelle become the fifth highest-paid player in the world and the south coast of England missing an Italian heartthrob.

Despite the striker’s hefty wage, 2018 has been the first time Pelle has reached double figures in a single CSL campaign.

Former Newcastle and Chelsea striker Ba is currently in his second spell with Shanghai Shenhua after 18 months in Turkey with Besiktas and Göztepe.

The 33-year-old’s first spell was ruined by a sickening broken leg which threatened to end his career, but his return began on a happier note with the winning goal against Tianjin Teda.

Perhaps best known in England for his long shots on FIFA, Guarin left Inter in 2016 for Shanghai Shenhua but publicly made clear his wish to return to the San Siro in February.

“I talked about it with [sporting director Piero] Ausilio last year, but financial conditions prevented it,” he told Gazzetta dello Sport.

“I’d go back right away, it’s my biggest wish. Money doesn’t interest me, I’d accept earning much less. We talked about it already last summer, there was [Frank] de Boer and a lot of confusion, but I wanted to come back at all costs.”

The 33-year-old has bagged 32 goals in 59 appearances for the club, but a serious hamstring injury suffered in the summer ruled him out long-term and ended his hopes of forcing his way into Nigeria’s World Cup squad.

This time yestrday I borrowed my brother’s car to my event because my (now former) car is a mess and dead. He was feeling reluctant to give me his keys and I said “Ayo pls, I ll soon buy a car and it won’t be the nonsense I’ve been having “ he laughed and said ok madam scammer ( that’s wat my family calls me cos I always scam them lol) . I rushed back to drop the car and cut off my fun. Got a call from the KING of football @obagoal that I should come and see something. Behold God used him to bless me with this new baby .. Lord . Today I pray for this man that may he never know sadness ,Downfall, disabilities . Sorrow in life .. may God always surprise him and his family . I’m grateful . P.S — never been surprised befor,this one hook me “ .#love#live#life#toyotacorollaa#white#postanddelete

After making a name for himself during a seven-year stay in Serie A with Lazio, Inter and Juventus, Hernanes joined Hebei China Fortune in 2017.

The midfielder has made just 14 league appearances for the side, has returned to Sao Paulo on loan and has been tipped to leave China permanently at the end of the season.

Jelavic worked his way up to the Chinese Super League after leaving West Ham – we’d completely forgotten he ever played for them – to join second-tier outfit Beijing Renhe in 2016.

Fifteen goals at that level saw the striker earn a move to Guizhou Zhicheng, where he replicated that tally in the top flight.

“When I was talking with Shanghai, I was talking to big clubs from Europe, as well,” Oscar told COPA90 in 2017. “There was Atletico Madrid, who I almost joined. I liked them very much and what they were offering me at the time.

“There was also Juventus, Inter Milan, and AC Milan. I had some options. But I opted for Shanghai and afterwards I can still return to Europe.”

Another former Chelsea man in China, Oscar also admits he thought about his family rather than his career first when he opted to join Shanghai SIPG – becoming the highest paid player in the world at the time.

The 27-year-old’s highlights have so far included missing two penalties in one game and receiving an eight-match ban for starting a brawl against Guangzhou.

And now former Chelsea man Oscar finding out that you don't boot the ball at players in the Chinese Super League…twice. pic.twitter.com/xQyTVpniWL

When asked how Oscar is faring in China on BBC’s World Football phone-in, Asian football journalist John Duerden replied: “He’s doing pretty well, but Hulk is the one who gets the headlines and is a more consistent performer, week-in, week-out.”

The Brazil forward hit 30 goals in 2017, and Shanghai SIPG are currently top of the table as they search for their first title.

Bakambu eclipsed Pierre-Emerick Aubameyang to become the most expensive African footballer in history when he joined Beijing Guoan in a £65million deal earlier in 2018.

The forward has hit the ground running with 14 goals to his name already.

Once one of the most exciting prospects in world football, Pato joined Tianjin Quanjian in 2017 after short and unsuccessful spells at Chelsea and Villarreal.

A return of 31 goals in 53 games is pretty impressive, but we preferred his last-gasp penalty miss against Shanghai Shenhua, which prompted this response from an opponent.

HAHAHAHA Pato missed a penalty & look at this opposition defender after it following him around with his thumb up 👍👍👍 China is Boss. pic.twitter.com/oj3NdmjXYE

One-time Blackburn loanee, Modeste failed to score in nine Premier League outings as Rovers were relegated, but a superb 2016-17 campaign for Cologne saw the striker earn a big-money move to Tianjin.

The side have struggled this term and Galatasaray were linked with a move for the 30-year-old in the summer, only to pull out of a deal.

Mikel has spent the last 18 months at Tianjin TEDA since leaving Chelsea, finishing 13th out of 16 teams last year, with the club currently set beat that finish by one place this season.

Some Chelsea fans still miss him.