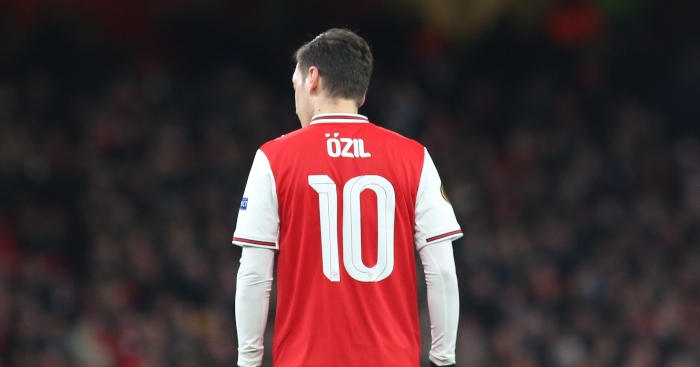 Mikel Arteta said he left Mesut Ozil out of Arsenal‘s squad to face Manchester City for tactical reasons – but what do the stats say about the Gunners’ performances with and without the German in their team?

Ozil was not even among Arteta’s nine substitutes for the 3-0 defeat at the Etihad Stadium, with Alexandre Lacazette also remaining on the bench throughout.

Neither player could have done much about David Luiz’s mistakes at the back, but might Ozil have made a difference at the other end? Here’s what the stats suggest.

In the 18 Premier League games that Ozil has started so far this season, Arsenal have won only five, lost four and drawn nine. Of the 11 in which he did not feature, they have won four, drawn four and lost three.

That means the Gunners have picked up an average of 1.33 points with the German in the team compared to 1.45 points without him, though it is worth noting two of the wins in his absence came in the first two games of the season under Unai Emery, while three of the wins with him in the team occurred in the final three games before the hiatus.

That does also not, of course, take into account the standard of the opposition, the form they were in, or the strength of both teams’ line-ups on the day. But it is worth noting that Ozil did play the first 59 minutes of the home game against Manchester City…which Arsenal also lost 3-0.

Again, the figures with Ozil in the team are slightly inflated by the eight goals Arsenal scored in the three games prior to the break – and it was not until those games that the German finally provided his first Premier League goal and assist of the season, breaking his duck in the 4-0 win over Newcastle before setting up the only goal in the 1-0 win over West Ham.

He may have only one assist to his name in the Premier League, but Ozil has created a squad-high 37 chances for team-mates so far this season, three more than next-best Nicolas Pepe despite playing fewer minutes.

Ozil was credited with setting up a chance against City in December, but he was jeered by fans as he trudged off after being substituted, with stand-in boss Freddie Ljungberg giving a hint as to why the 31-year-old did not feature in Wednesday night’s game at the Etihad: “We want possession, but sometimes we want to run, tackle and win the ball back.”

It is worth noting that Saka did not attempt a single tackle in Wednesday’ defeat at the Etihad, at least according to WhoScored, but then neither did Ozil in the home defeat.

If there is anything to be drawn from these basic stats, it is probably that Ozil is neither the cause nor the solution to Arsenal’s problems.