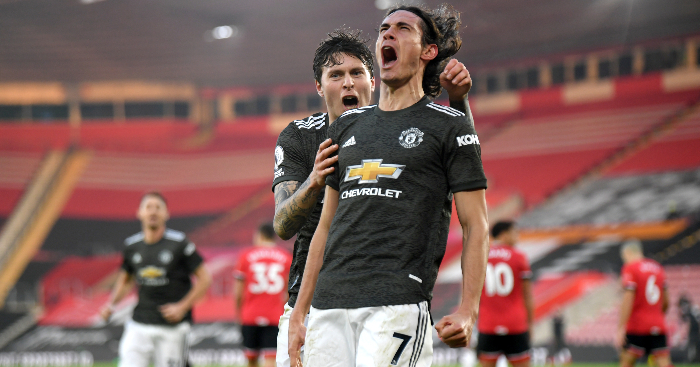 Edinson Cavani battered his way to the front of Manchester United‘s striking pecking order on Sunday afternoon with a world-class second-half display against Southampton.

With two goals and an assist, Cavani dragged the Red Devils back from 2-0 down to pick up a crucial 3-2 win, securing a club-record eighth straight away win in the process.

Not many fans or pundits were too impressed with Ole Gunnar Solskjaer’s decision to bring the 33-year-old in on deadline day and comparisons were soon being made to previous attacking recruits before he had even kicked a ball.

But following his opening five league appearances, Cavani can boast a record of three goals and one assist – not bad for someone who is yet to start a domestic game.

So, how do his opening league displays compare to those of United’s previous big-name recruits?

The Dutchman’s impact was famously immediate, netting 26 Premier League goals as United returned to the summit of the top-flight table.

His opening five league games for the Red Devils set the tone. Following a disappointing opening day defeat to Everton, in which RVP only played a cameo role, starts against Fulham and Southampton returned one goal and a hat-trick respectively, including an outrageous swept finish against the Cottagers at Old Trafford.

Another blank in a cameo against Wigan followed but he marked his fifth league appearance with another goal – an 81st-minute winner against Liverpool no less.

It is rare that a talisman emerges quite as quickly as this and while Cavani has impressed, his impact over his first five games is not quite van Persie levels.

When you think of Manchester United flops from recent years, it is likely that Falcao will spring to mind.

It had been just over a year since the Colombian scored 28 La Liga goals in a single season for Atletico Madrid but, following a rupture of his cruciate ligament in his first campaign as a Monaco player, it was perhaps a bit harsh to expect as much from the striker as we all did at Old Trafford when he signed in the summer of 2014.

If you are to look at the stats alone, however, his first five games in the Premier League do not paint too ugly a picture, bringing two assists and a goal as United made a strange start to the season – including that epic 5-3 defeat to Leicester City.

But Falcao was rarely a menace in any of those matches. In his second-half appearance on Sunday, we saw Cavani lead a one-man wrecking crew against Southampton; he was a man ravenous for three points, something we never saw from Falcao in his opening games.

Cavani can rest easy knowing that his impact at Old Trafford is already greater than his fellow South American’s.

Eyes watered at the £50million United threw at Monaco for the signing of the young striking talent back in 2015.

But we all remember how well it started, how the Frenchman’s shimmy past Martin Skrtel and excellent finish secured a 3-1 win against Liverpool on debut, sending Martin Tyler into a state of ecstasy many of us will be lucky to ever experience.

Because of that goal, it is easy to forget that his next appearance was even more impressive. A frustration for many fans in recent years has been Martial’s inability to be the deciding factor in games. But against Southampton, he did just that.

A wonderful turn and finish in the first-half set United on their way before he pounced on a woeful backpass and finished with ice in his veins to bring up his second of the match, securing a 3-2 win in the process.

An assist against Sunderland followed in his next outing before his influence dwindled in the following two games. But there is no doubt that his impact was immediate, impressive, and not too dissimilar to Cavani’s.

It is funny to think how many people thought Ibrahimovic was past it when United brought him in on a free back in 2016. Especially when you consider that, now aged 39, he has 10 goals in six appearances for AC Milan this season.

Having professed his love for Jose Mourinho prior to his move, Zlatan gave his new boss the best possible start.

His first goal came in a 3-1 win against Bournemouth, an arrowed effort into the bottom corner from 25 yards, before a towering header and a cool penalty saw Southampton swept to the side at Old Trafford.

It is a start that you feel Cavani may have been able to replicate had he come to the club with a full pre-season behind him. However, it feels like such form may not be far away.