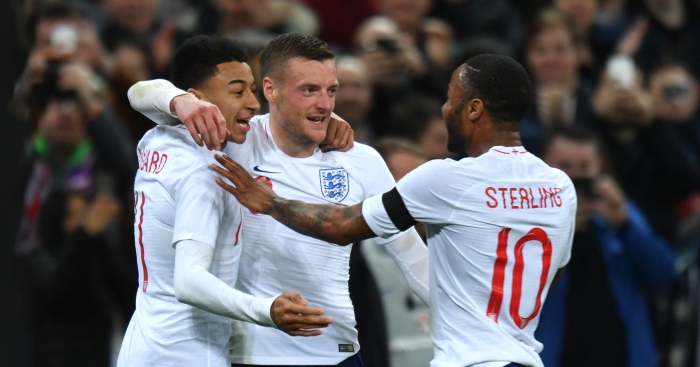 England produced another positive performance against Italy at Wembley, but were ultimately denied by a late penalty in a 1-1 draw.

After a promising 1-0 victory over the Netherlands on Friday night, England showed more bright moments against Italy, and took the lead in the first half thanks to a powerful finish from Jamie Vardy.

Italy pulled one back late on, however, when Lorenzo Insigne converted a penalty which had only been awarded following a consultation with VAR.

We’ve taken a look to see how each England player was rated by The Times, the BBC, the Daily Mail, the Daily Mirror and The Sun, to calculate an average of how they were considered.

With the No.1 shirt still up for grabs, Butland may have wanted more work to do to showcase his ability, but ultimately had a quiet night until he was finally beaten by Insigne’s penalty.

As a result, the goalkeeper was awarded sixes right across the board.

Walker has slotted in comfortably to an unfamiliar role in a back three for the two fixtures, and the Manchester City man was described as a “revelation” by The Sun, who still only awarded him a seven.

Only the Daily Mirror (six) awarded the 27-year-old lower than a seven.

Congratulations to @kylewalker2 who was chosen as the official #Vauxhall @England Man of the Match against @Azzurri tonight #GetIN pic.twitter.com/wjtWOBwtod

Another difficult night for Stones, who is finding times hard amid a battle to break into Manchester City’s starting XI.

The defender had a couple of nervy moments and was awarded a five by the Mirror and the BBC, although he was given a 6.5 by the Mail.

A solid, albeit strange, debut for Tarkowski, who looked assured throughout, only to be punished by VAR for Italy’s eventual penalty.

With the likes of Michael Keane, Gary Cahill and Chris Smalling currently out of favour, the Burnley man is definitely in contention for a place in the World Cup squad.

Trippier started at right wing-back for the second-consecutive game but switched to the left flank midway through the first half.

With Walker potentially operating at centre-back, the Spurs man appears a shoo-in to travel to Russia.

Like his Spurs team-mate Trippier, Dier was awarded sixes and sevens on a night he captained England.

As ever, he was solid if unspectacular, but showed his versatility in dropping into the back three following an injury to Stones in the second half.

One of the most polarising players in the England squad, Oxlade-Chamberlain was awarded a five by The Times, but was given a seven by the Mirror.

As long as he continues to play regularly for Liverpool, it’s hard not to imagine Oxlade-Chamberlain on the plane.

Young can be encouraged by his first England start in five years, replicating his Manchester United form while operating at both right and left wing-back.

After starting the season as only an outside bet to go to Russia, Lingard now appears a certain pick, and potentially a starter, thanks to excellent form for club and country.

Lingard scored the only goal against the Netherlands on Friday and his quick thinking created Jamie Vardy’s opener at Wembley.

Sterling asked for love from the England fans ahead of the fixture and produced a performance which deserve plenty as he operated more centrally and troubled the Italians with his pace and trickery.

Despite being given a nine by the Mirror, who dubbed this his “best game for England”, the City attacker was only awarded a six by the Times.

This has probably been Raheem Sterling's best game for England. He looks like a Man City player out there, he's asserting himself – and enjoying it.

After failing to touch the ball during his cameo against the Netherlands, Vardy made the impact he would have hoped for in the absence of Harry Kane, finishing clinically after being played in by Lingard.

Should Kane return to fitness in time, Vardy is likely to be used as an impact sub, but England can rest assured the Leicester hitman is in good form.