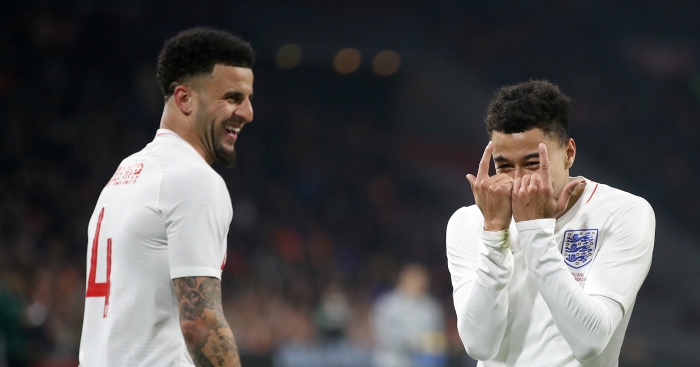 There were some varied performances as England defeated the Netherlands, with Manchester City, Manchester United and Liverpool men all impressing.

The World Cup is edging ever-closer, with England fans keen to see who could be lining up in a Three Lions shirt in Russia.

And with the game against Holland the penultimate friendly before the World Cup squad is announced, Gareth Southgate had a lot to cast his eye over.

Rather than rating the performances of his selections ourselves, we thought it would be better to take five media outlets’ ratings and average them out, picking out what they all said.

We looked at ratings from the BBC, Daily Mail, Independent, Daily Mirror and Squawka to attempt to dissect just how well each player staked their claim.

The general consensus seems to be the same, Pickford’s performance did nothing to help Southgate decide who his World Cup No.1 wll be.

‘Indifferent’ was used more than once to describe a display which received a 6 from each publication.

A rating which could have been higher if Walker hadn’t seemingly been punished for his manager’s decision to play him slightly out of position, rather than judging how well he played in that position.

Walker was the only player to receive an 8 – with the BBC and the Mirror awarding him the score – seeing John Cross describe him as “a revelation” on the right of a three-man defence.

Jordan Pickford when he see's Walker at centre back. pic.twitter.com/P4LvEykP8J

A consistent mark across the board for the Manchester City defender, who, barring injury, will certainly start in Russia.

It would be unfair to assess Joe Gomez, who was unfortunately taken off injured after 10 minutes, and the journalists couldn’t make their mind up on Maguire.

Some thought he looked shaky when the defence had clearly been set up to deal with Holland’s pace, while others suggested he looked assured and composed.

I reckon Harry Maguire is going to be the player we find out takes a surprisingly good penalty, before he skies one in a shoot out in England's World Cup second round exit.

A decent performance from the Spurs man who should also earn praise for preventing any kind of attack from building down the hosts’ left-hand side.

However a 5 from Squawka which was again more aimed at the decision to play Walker out of position, rather than crediting Trippier’s performance.

A positive Cross described Henderson as “excellent” as he handed England’s skipper a 7 – one of three publications to do so.

Though Squawka bemoaned his lack of creativity – which you can’t help think wouldn’t have been a problem if Jack Wilshere were alongside him – his defensive contributions were praised across the board.

Only the Mail ranked Chamberlain higher than his Liverpool team-mate, as the former Arsenal man appeared to have little impact on the game.

He also received one of only two 5 ratings that weren’t handed out by Squawka, with the Independent claiming he “failed to recreate his bright central displays for Liverpool”.

1 – Despite having 54% possession in the first half, England (1) registered fewer shots on target than Netherlands (2); with their only one coming in the 8th minute through Alex Oxlade-Chamberlain. Restricted. pic.twitter.com/L7EpXk0QDB

England’s worst player on average, Rose received a 5 from Squawka and the BBC, with Phil McNulty claiing he “wasted too many opportunities”.

Belief seems to be that Rose is out of practice and not at his best, which means he could lose his place for the World Cup. The Independent said Young “looked in prime condition” when he replaced the Spurs man on 71 minutes.

While Sterling’s pace, endeavour and forward drive saw him score three 7s and a 7.5, Squawka chose to hand the Manchester City winger a very unfair 5/10.

“A quiet game for the Manchester City man, playing more central than he would be used to,” they said.

Another harsh score from Squawka, Rashford’s critiques were largely varied, and most noted that he deserved a first-half penalty when he was brought down by Matthijs De Ligt.

The Daily Mail said “his pace petrified Holland” while the Independent described him as a “major downgrade on Harry Kane”.

Should have been a penalty there #England #rashford pic.twitter.com/D9zjv8WqnA

A consistent score for England’s match-winner, who continues to force his way into Southgate’s World Cup plans.

His first international goal will have gone down well with the manager, whose side had only scored four goals in their previous five internationals, with no-one other than Kane scoring in the last four.

Despite the Daily Mail failing to realise that Young even entered the field of play, fairly middle-of-the-road scores were handed out to England’s replacements as the game grew disjointed.

However, Alli was surprisingly handed a 4 by Squawka with little explanation, while Young earned the only 7 of the subs from the Daily Mirror. Eric Dier’s cameo was too short to place any judgement on.