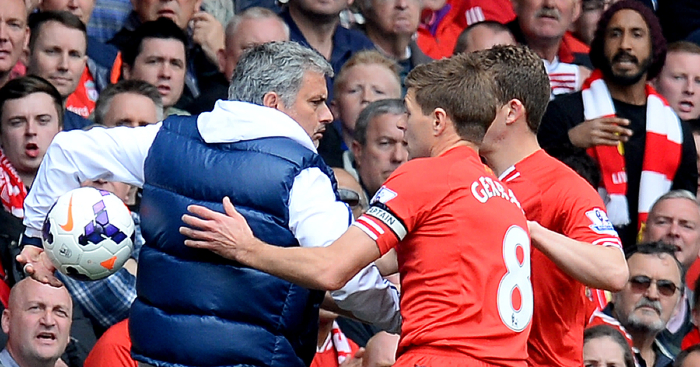 Stamford Bridge and Old Trafford aside, Jose Mourinho’s time in charge of both Chelsea and Manchester United can be defined by Anfield more than any other stadium.

Mourinho has faced Liverpool 28 times as a manager, more than any other club during his career so far.

We’ve taken a look back at every time the Portuguese has taken a side to Anfield, which offers a nice summation of his career in England.

The New Year’s Day clash would be the first meeting in Jose Mourinho’s rivalry with Rafa Benitez and would also help kickstart one of the great rivalries of the 2000s in the form of the newly-moneyed Chelsea against the traditional grandeur of Liverpool.

And Mourinho’s first visit to Anfield would contain all the tension which would go on to characterise his future trips.

Xabi Alonso was left with a broken ankle following a Frank Lampard tackle, the Reds saw two first-half penalty appeals turned down and Joe Cole ultimately bagged a deflected winner – his second against Liverpool that season – 10 minutes from time.

Although this had nothing on what was to follow…

A night which will go down in Anfield folklore, and one which will stick long in the memory of Mourinho for all the wrong reasons.

Did Luis Garcia’s ‘ghost goal’ stole the headlines as Liverpool triumphed in the Champions League semi-final, but Chelsea also missed a golden chance through Eidur Gudjohnsen late on which would have secured their progress on away goals.

The tension between the two sides was now fully established, especially after Steven Gerrard handed in a transfer request amid Chelsea interest following his heroics against AC Milan in Istanbul, and to make matters worse they were drawn in the same Champions League group the following season.

But their first clash in the 2005-06 edition of the competition passed by with little incident. We’re going to blame the presence of Florent Sinama-Pongolle.

Just a month later, the Blues visited Anfield once more to record a resounding victory in the Premier League to go nine points clear at the top of the table.

Didier Drogba was central to everything, winning a penalty converted by Lampard before helping create goals for Damien Duff, Joe Cole and Geremi to ensure Gerrard’s equaliser was a mere consolation.

Benitez’s side would deal Chelsea’s title hopes a huge blow the following season as a Dirk Kuyt strike and Jermaine Pennant stunner helped Liverpool to all three points.

“When the team is very fragile on the pitch and mentally not so self-confident it is difficult,” Mourinho bemoaned afterwards.

For the second time in three years, the two sides faced off in a Champions League semi-finals, and Daniel Agger’s early goal handed Liverpool a precious equaliser before the hosts went on to win on penalties.

“We were the best team today, even against a team only playing for the Champions League,” Mourinho said.

“In extra-time we were the only team who tried to win, but football is like that and the penalty shoot-out is part of the game.”

Looking back at that time, Jamie Carragher told Lampard in an interview for the Daily Mail: “I’ll be honest. I couldn’t stand you as a club. It surpassed Everton and Manchester United as our rivalry for a period.”

The last time Mourinho would take a side to Anfield before being sacked by Chelsea for the first time just a month later, Fernando Torres opened the scoring with his first goal for Liverpool before Lampard once again scored from the spot.

A 1-0 win against Portsmouth the following week would be the Portuguese’s last of his first spell at Chelsea.

Mourinho’s finest and most infamous moment at Anfield came upon his return to Chelsea in 2013-14, as he ruined Liverpool’s title challenge with a typically dogged defensive display.

The Blues sat back and picked off Liverpool’s errors, most notably Gerrard’s slip, with Mourinho also antagonising opposition players on the sidelines by refusing to give them the ball back quickly for a throw-in.

“There were probably two buses parked today instead of one,” Brendan Rodgers smarted afterwards.

In a game we had completely wiped from our memory, this fixture summed up the two sides’ differing fortunes since the embittered battle of the previous campaign.

Liverpool, with Luis Suarez having been sold to Barcelona, could not replicate their title challenge, with Mourinho’s Chelsea instead romping to glory.

But the Reds actually went in front thanks to an early Emre Can goal, only for Chelsea to mount a comeback thanks to Gary Cahill and Diego Costa, who enjoyed a number of clashes with Martin Skrtel.

Drawn against each other in the semi-finals of the League Cup, Eden Hazard opened the scoring in the first leg from the spot, but Liverpool kept the tie alive with an excellent solo goal from Raheem Sterling.

Mourinho reverted to type as Chelsea were left to weather a storm, with Liverpool having 20 shots on goal to the visitors’ two, including a Gerrard effort which came back off the post.

The Portuguese has never been beaten by a team managed by Rodgers, and Chelsea triumphed 1-0 in the second leg after the game went to extra time.

TBT – @sterling7 taking on the Chelsea defence to score a superb individual goal in the EFL Cup Semi-Final (First Leg) in 2015 #Colossal pic.twitter.com/c6pKivkVpA

Mourinho’s visits to Anfield as Manchester United were perhaps the most cautious of his career, and he set the tone from the off as the fierce rivals played out a drab draw.

United enjoyed just 35% of possession, their lowest in a Premier League match since Opta began recording the data in 2003-04, and were left to rely on two fine saves from David de Gea.

But Mourinho was a happy man: “That was probably the quietest Anfield I had and I was expecting it to be the other way. It was a positive performance.”

There are plenty of moments which it is possible to look back on as the moment things started to go wrong for Mourinho at Manchester United, and this may be one of them.

United had started the season in eye-catching form, winning 4-0 on four separate occasions as they won six of their opening seven fixtures in the Premier League.

It appeared Mourinho had taken off the handbrake to allow the likes of Paul Pogba, Romelu Lukaku and Anthony Martial to flourish, but they screeched to a halt with another conservative display at Anfield.

In his post-matched interview, Mourinho said: “A point, in this long marathon? A point at Anfield is okay.”

But the Red Devils never recovered the attacking fluency with which they had started the campaign, and a defeat against Huddersfield in their next outing took the shine away from a point against Liverpool.

If those early trips to Anfield characterised all that was good about Mourinho’s management – the siege mentality, the defensive solidity, the ruthless ability to punish the slightest of mistakes – then his final visit to the famous stadium summed up all that had gone wrong.

United were meek and looked bereft of ideas and inspiration as they sat back and allowed the hosts to dominate the game, only this time they lacked the resilience to hold Liverpool out.

It speaks volumes that a United hierarchy which was widely expected to wait until the end of the season before dispensing with Mourinho’s services decided enough was enough after this display.