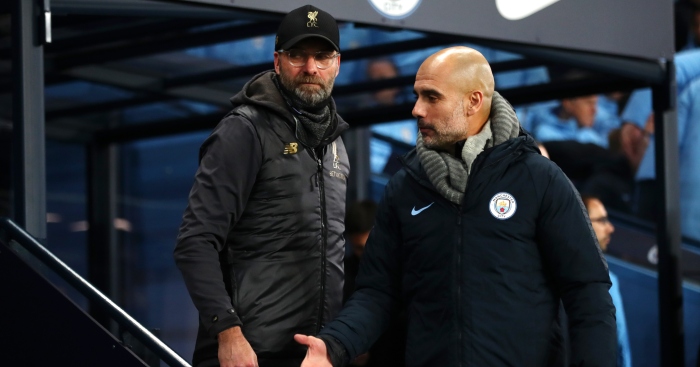 After 13 games the Premier League table is starting to take shape – but how are Manchester City and Liverpool doing compared to last season?

We’ve taken a look at both sides results so far this season and looked back at how they fared in the corresponding matches in 2018-19.

For relegated sides we’ve used the clubs which are newly promoted this season, i.e. Cardiff City have been replaced by Norwich City while Fulham are replaced by Sheffield United and Huddersfield are replaced by Aston Villa.

Last season Liverpool won nine and drew four of the corresponding 13 fixtures, so they picked up 31 points out of a possible 39.

In 2018-19, the Reds were only able to get a 1-1 draw away at Stamford Bridge, but they got an extra two points with a 2-1 victory against Chelsea this season.

Jurgen Klopp’s side also drew at home to Leicester in 2018-19, but a late James Milner penalty gave them a 2-1 win earlier this season.

In last year’s corresponding game between Manchester City and Liverpool at Anfield, Riyad Mahrez missed a late penalty for the visitors and the spoils were shared.

However, in 2019-20 goals from Fabinho, Mohamed Salah and Sadio Mane gave Liverpool a 3-1 victory and they went eight points clear at the top of the table.

Just like last season, Liverpool won at home to Norwich/Cardiff, Arsenal, Newcastle and Spurs. They also won away at Southampton, Burnley, Sheffield United/Fulham, Aston Villa/Huddersfield and Crystal Palace in both seasons.

The Reds also dropped two points at Old Trafford in 2018-19, but they couldn’t improve on that and got another draw this campaign.

Therefore, Liverpool have six points more this campaign than they did in their corresponding fixtures last season, although their goal difference is currently 19 which is one less than they had after these fixtures in 2018-19.

Jürgen Klopp's side move into the top three. pic.twitter.com/8y3WTJEqck

Last season City won 12 and drew one of the 13 equivalent fixtures, so they picked up 37 points out of a possible 39. However, things haven’t gone quite as well for the Blues in 2019-20.

In 2018-19, City had a comfortable 5-0 win away against Cardiff, but they struggled against their replacements and lost 3-2 away at Norwich this season.

Pep Guardiola’s side also picked up three points at home against Wolves last season, but an Adama Traore double gave the visitors a shock 2-0 win in October.

In last season’s corresponding fixture between Manchester City and Spurs at the Etihad, Phil Foden’s goal was enough to give City a 1-0 win, but they dropped two points in a 2-2 draw this season.

Also, the Blues got a point from Anfield in 2018-19, but they left with nothing earlier this month.

Just like last season, City won at home to Brighton, Watford, Villa/Huddersfield, Southampton and Chelsea. They also won away at West Ham, Bournemouth, Everton and Crystal Palace in both seasons.

Overall, Liverpool have started picking up points in games they struggled in last season while Manchester City have been dropping points in matches that they would normally win.