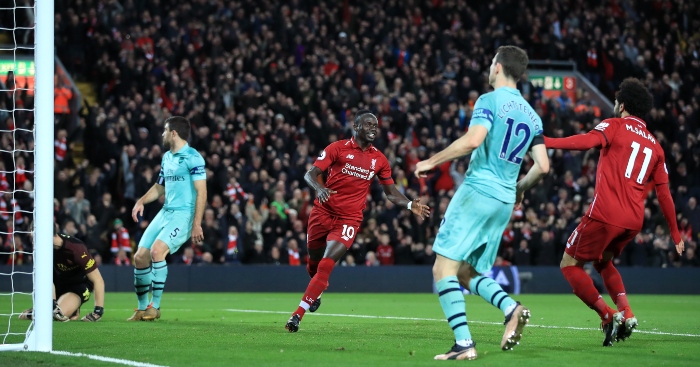 For a long time, Liverpool v Newcastle was used as a synonym for Premier League excitement. But these days it’s Liverpool v Arsenal we should all look forward to.

The last nine games between the sides have brought 49 goals, an average of more five per game, and even the lower-scoring games have been packed full of high drama.

Now, let’s be clear. these games aren’t necessarily good. What they are, however, is entertaining.

We’d already had hints of the madness which was to follow with Júlio Baptista scoring four goals in the fixture in 2007 and Andrey Arshavin repeating the trick two years later, but things have been ramped up a notch since 2010.

READ: A detailed recollection of Liverpool 4-4 Arsenal, one of THE great PL games

It’s as if Joe Cole flicked a switch when, just 45 minutes into his league debut for Liverpool, he jumped into a challenge with Laurent Koscielny to earn a straight red card.

From that point forward, Liverpool v Arsenal no longer needed to play by anyone else’s rules.

That same match saw Pepe Reina throw the ball into his own net in the 90th minute, letting fans know they always needed to keep watching to the very end. And we mean the very end.

In the reverse fixture in 2011, Robin van Persie gave Arsenal a 98th-minute lead, and even that wasn’t enough, with Dirk Kuyt converting from the spot after the clock had ticked past 100.

The whole affair was enough for American journalist Sam Borden to describe Arsène Wenger’s side as “the Mets, pre-04 Sox and a circus all in one”, but even that felt generous.

It certainly felt generous three years later, when the Gunners let you know you needed to be alert right at the start as well.

Remarkably, Arsenal were top of the league when they travelled to Anfield in February 2014, yet they found themselves behind inside one minute and four goals behind inside 20.

It could easily have been more, too, with Daniel Sturridge missing a one-on-one and Kolo Touré firing wide of an empty net with the score still at 2-0. Even blinking was a risk if you wanted to soak up every last bit of entertainment on offer.

Martin Škrtel scored twice in that game, demonstrating this fixture’s knack for throwing up unlikely goalscorers.

The quadruple in the cup accounted for 40% of Baptista’s Arsenal goals, while David N’Gog’s opener in 2010 was one of only two he scored that season.

Perhaps the most striking example, though, came in 2016.

Joe Allen had scored just two goals in more than 75 Premier League games for Liverpool, but he was on hand to provide a dramatic 90th-minute equaliser after Arsenal had twice come from behind to take a 3-2 lead.

It was a finish so calm that we never once doubted its destination, but that didn’t stop us reacting with astonishment when we saw who the scorer was.

And if Cole’s foul had flicked a switch, Allen’s sent things into overdrive.

The draw was Jürgen Klopp’s first taste of this fixture, and that run in 35 goals in seven games coincides directly with the German’s time in charge.

It can’t just be a Klopp thing, though. Just one of Liverpool’s nine games against Chelsea during his reign has brought more than three goals, while the figure is one also one in nine for Manchester United and one in ten for Southampton.

Arsenal haven’t even had the same manager throughout, either, with Unai Emery’s two games producing eight goals.

Plenty of the strikes in the Klopp era have been special, too, with Philippe Coutinho’s 30-yard free-kick and Sadio Mané’s solo effort among the standouts.

Sadio Mané: “I will go for the one I scored against Arsenal because it was my first official game with Liverpool. I will never forget it, for sure. I was really pleased at the end of the day that we won the game.” 🔥 pic.twitter.com/Hu5EyIvVcY

Mohamed Salah added another wonderful goal to the collection in a 3-1 Liverpool win at the start of the 2019-20 season, but it was it was nice to be reminded a couple of months later that this fixture can still throw up the ridiculous as well as the sublime.

Both teams rested the majority of their big names for the League Cup tie at Anfield, but different personnel can’t alter what is set in stone: this game must be crazy. And so followed a 5-5 draw which saw Liverpool take the lead early but then fall 3-1, 4-2 and then 5-4 behind before Divock Origi’s 94th-minute equaliser.

We’re not sure what happens differently in this fixture. We might suggest the managers tell their players to just go out and have fun, but it feels like that’s not specific to one fixture, at least as far as Klopp is concerned.

Still, that explanation would at least explain Roberto Firmino’s no-look finish in the 5-1 win in 2019, a rare example of a player showboating for an equaliser.

If Liverpool v Newcastle ultimately began to freeze under the pressure of living up to the entertainment of 1996 and 1997, Liverpool v Arsenal has gone in the opposite direction.

Now, if only we could bottle what this game has and find a way to share it around.