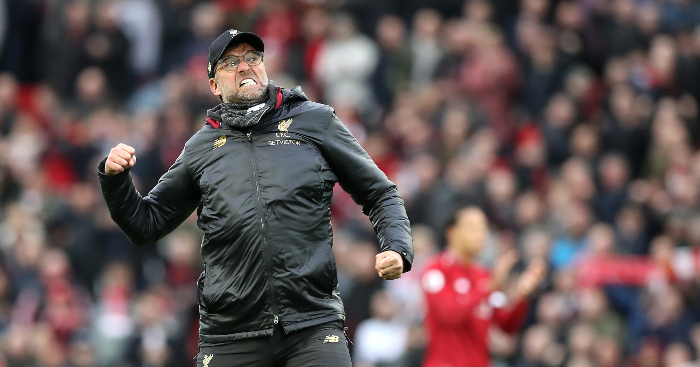 The Premier League season is reaching its conclusion and Liverpool, having kept the pace at the top throughout, are still well in contention with five games to go.

Man City, while second, are still in the driving seat with a game in hand, but Jurgen Klopp’s side have the easier run-in on paper and claimed a 3-1 win in one of their trickest remaining fixtures at Southampton on Friday.

They still require City to slip up, but while it would be scant consolation to the Reds, they’re likely to statistically be the best-ever runners-up if they don’t quite do it. Here’s how they compare to previous title winners:

If they win their last five games – as they may well need to do – they’ll finish on a final total of 97 points. That would eclipse every Premier League title winner in history, except Pep Guardiola’s record-breaking City, who hit the 100-point mark last season.

Guardiola’s men can’t match their tally of last season, but they can still hit the 98-point mark.

If you extrapolate what Liverpool have averaged so far – 2.48 points per game – over the remaining five games, that would be enough to finish on 94 points. Only Jose Mourinho’s Chelsea since 2005 have managed more in the Premier League era.

With 82 points, Liverpool have already finished on more points than last season’s runners-up, Manchester United, who finished on 81.

Nobody before Arsenal in 2005 had finished second with more than 82 points, but eight more have since.

No team has ever hit the 90-point mark and not won the league so Liverpool need eight more points for the unwanted honour of finishing as the second-place team with the most points.

That’s currently held by Manchester United, who finished on 89 points in 2012 but lost out on goal difference as rivals City lifted their first Premier League title.

Liverpool have managed more than 82 points just twice in the Premier League era – the other two times they put in a credible title challenge.

Powered by the goals of Luis Suarez, Brendan Rodgers’ side of 2013-14 finished on 83 points – so this team needs just one more win to eclipse them.

Before the Premier League, the Reds famously totted up 18 league titles. The majority of those were before the three points for a win era, introduced in 1981.

They did win six titles between 1981 and 1991, though, as they completely dominated during the 80s, finishing in the top two for 10 years straight.

On a points-per-game basis, this is set to be the best season in the club’s history – will they have the silverware to show for it?