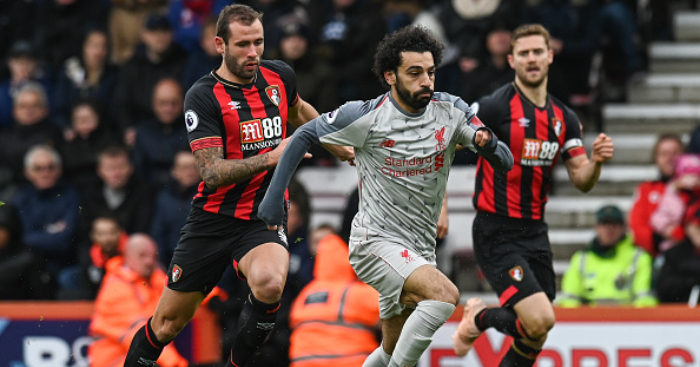 Liverpool went top of the Premier League on Saturday following their 4-0 win over Bournemouth – and remained there with Chelsea beating Manchester City 2-0 at Stamford Bridge.

Jurgen Klopp’s Reds have begun the 2018-19 campaign in fine form and are now showing signs of hitting top form as they look to go toe-to-toe with City.

Mohamed Salah bagged a hat-trick against Bournemouth, taking him to 10 goals for the season, the joint most alongside Pierre-Emerick Aubameyang, while at the other end Liverpool have shipped just six goals, giving them the best defence in the Premier League.

We look at the numbers behind Liverpool’s unbeaten start and how they compare to seasons past.

With 16 games played so far this season, Liverpool are much improved than at the same stage last year. They currently boast 42 points, one more than City, whereas a year ago, the Reds were fourth with 30 points, some 16 behind City at the top with 46.

Interestingly, Liverpool have scored 34 goals so far – the exact same number they had at this point in 2017-18. However, they had already conceded 20 goals after 16 games last season, compared to just six so far this term. They’ve also kept 10 clean sheets this season, which is the most in the Premier League.

This defensive improvement can largely be credited to the signings of Alisson and Virgil van Dijk. Alisson has played every minute of the season so far and is clearly a safer pair of hands than Loris Karius or Simon Mignolet have proven to be.

Meanwhile, Van Dijk, who joined in the January window of last season, has played all but 35 minutes of Premier League action this season and has been at the heart of Liverpool’s excellent defence.

Unsurprisingly, this has been Liverpool’s best ever start to a season. And as we head towards Christmas and the halfway mark of the season, their points total stacks up nicely against title winners of recent years.

Here’s how they compare after 16 games:

After scoring 32 goals in his first season at Liverpool last year, it was always going to be a tough act for Mo Salah to follow.

However, the Egyptian magician continues to amaze. His opener against Bournemouth was his 40th goal in 52 Premier League games for Liverpool – it’s the fastest a player has ever reached that number for the club (it took Fernando Torres 60 games and Daniel Sturridge 64).

It’s not all about Salah this season, though. Quality performances are being made throughout the side – as displayed in last week’s 3-1 win over Burnley, where six different players were involved in the goals (goals from James Milner, Roberto Firmino and Xherdan Shaqiri, with assists Divock Origi, van Dijk and Salah).

There’s still a long way to go in the 2018-19 season, but the numbers and the performances bode well for Liverpool, if they can keep Pep Guardiola and Man City at bay.