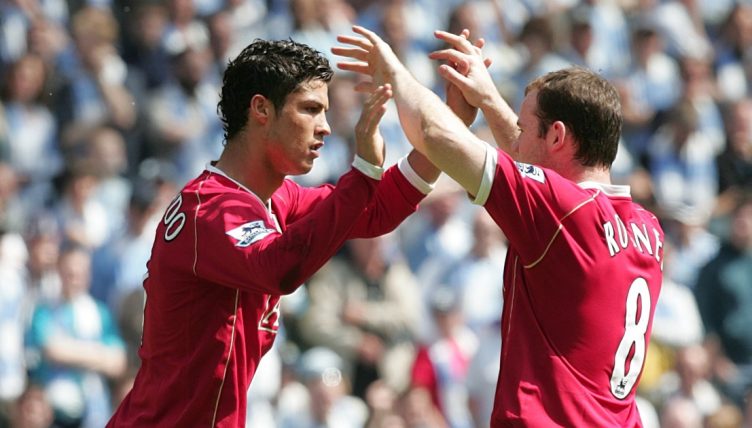 Cristiano Ronaldo is one of the greatest goalscorers of all-time, breaking numerous records across his glistening career – but he trails former team-mate Wayne Rooney in the list of Manchester United’s top scorers

Ronaldo and Rooney played together in United’s attack between 2004 and 2009, with their goalscoring exploits helping United win three successive Premier League trophies.

But, while Ronaldo left for Real Madrid in the summer of 2009, Rooney stayed at Old Trafford and became United’s record goalscorer.

Portugal’s record goalscorer returned to the Premier League at the beginning of the current season and, despite United’s travails, has scored eight goals in 16 league appearances, with another six in Europe.

Despite this, the 36-year-old Ronaldo is running out of time if he’s planning on overtaking the former England captain before he retires.

With that in mind, we’ve done the maths to calculate how long it will take Ronaldo to catch Rooney if he continues his current rate of scoring, obviously on the basis that he stays injury-free.

– Ronaldo has scored 132 goals for Manchester United but still needs to score 121 goals for the club to break Rooney’s all-time goalscoring record.

– Ronaldo has averaged 45 games a season since turning 30 and has averaged 0.88 goals during that period. At that rate, he’d need 137.5 games to eclipse Rooney’s record – or just over three seasons.

– He needs to score 23 more goals to draw level with Paul Scholes and break into United’s all-time top 10 goalscorers.

– He needs 36 more to draw level with Ryan Giggs and 47 more to match the great George Best.

– Ronaldo has scored 92 times in the Premier League for United, level with Ole Gunnar Solskjaer. He needs to score three more goals to draw level with Van Nitselrooy and 15 to equal Scholes’ total.

The goal was later voted as the BBC 06/07 goal of the season. #MUFC pic.twitter.com/RZAMZdrKD2

– To overtake Alan Shearer as the competition’s top scorer, the Portugal international would need to score 172 more goals – or 57 a season before his 40th birthday.

– Ronaldo currently averages a goal every 172 minutes in the Premier League, 11 minutes lower than Rooney. Only Van Nistelrooy and Solskjaer average a better record for United in the competition.

– Despite the unlikeliness of Ronaldo overtaking Rooney’s overall record, there’s every chance he’ll overtake his former team-mate’s Champions League record. Ronaldo has scored 21 times in the competition for United, only nine behind Rooney.

– According to Roy Keane, Ronaldo was bought back to United in 2021 to help the club ‘win a cup’. He scored one in every two FA Cup matches during his first spell at the club, lifting the trophy in 2004. He’s currently nine goals behind Rooney’s total of 22.