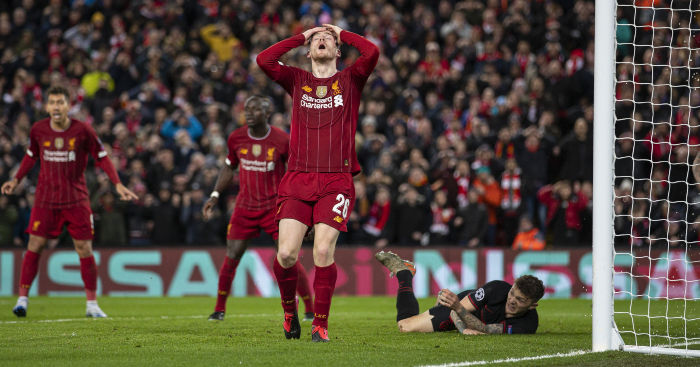 While the short-term future of the 2019-20 Champions League remains clear, English clubs can already estimate how much they have earned from the competition this season.

Football finance expert Swiss Ramble has produced some brilliant research on the impact the outbreak of coronavirus may have on clubs throughout the pyramid in England, which featured how much Liverpool, Manchester City, Tottenham and Chelsea are likely to have earned from the Champions League to date.

We’ve divided the information club-by-club below, including a comparison to how much they earned from European competitions in 2018-19.

Reigning champions Liverpool were knocked out of the competition by Atletico Madrid in the final high-profile match to take place before football was suspended earlier this month.

Like all clubs in the Champions League, the Reds earned €15.25million due to their participation alone. Their record of four wins, one draw and a defeat in the group stage pocketed the club around €12.8million, while they were awarded a further €9.5million for reaching the last 16.

Thanks to their coefficient ranking, calculated on the basis of performances in European club competitions over a 10-year period, earned Liverpool €27.7million – the second highest of all English clubs. And their earnings from the TV pool are estimated by Swiss Ramble to be around €18.9million.

Those figures take Liverpool’s earnings from the competition to a total estimate of €84.1million. That is the second highest estimated income from the Champions League of all English clubs but is significantly down on the €111million they earned for winning the tournament last season, which was the highest total ever collected by the winners.

In what could be their final Champions League campaign for the foreseeable depending on the outcome of their appeal against their European ban, City are the only English side well placed to progress to the quarter-finals (if the competition does resume) thanks to their 2-1 win at Real Madrid in the first leg of their last-16 tie.

As things stand, City have earned €13.6million for their unbeaten record in the group stage, recording four wins and two draws, to go with their initial €15.25million for participation.

As well as the €9.5million for reaching the first knockout stage, City earned €25.5million for their coefficient and €22.3million from the TV pool, although that would increase were they to progress further.

That brings their total Champions League revenue to date to €86.2million – a figure which would increase to around €131.2million if they won the tournament.

Last season, City brought in €93million after being knocked out in the quarter-finals by Tottenham.

Like Liverpool, last season’s finalists Spurs were knocked out at the last-16 stage this term in a convincing 4-0 defeat to RB Leipzig across two legs.

Tottenham had the worst record of any English team in the group stage, winning three times, drawing once and losing twice, providing €9.8million in prize money as well as the €15.25million for participation and €9.5million for progressing from the group stage.

Despite reaching the final in 2018-19, the north Londoners’ UEFA coefficient is the lowest of all four English teams, bringing in a further €19.9million, while their €12million income from the TV pool is also the lowest of the Premier League quartet.

In total, Tottenham’s Champions League revenue of €66.5million puts them bottom of the pile in terms of the English representatives in the competition and is well down on the €102million they pocketed for finishing as runners-up last season.

By my calculations, English clubs up to the last 16 have already earned good money from the Champions League: #MCFC €86m, #LFC €84m, #CFC €82m and #THFC €67m, though Liverpool and Spurs are well down on last season when they both reached the final. pic.twitter.com/IlCNEo71W4

Frank Lampard’s side are still technically in with a chance of progressing to the quarter-finals of the competition, although their hopes appear slim after a 3-0 defeat to Bayern Munich at Stamford Bridge in their last-16 tie.

Their €15.25million for participation this season was supplemented by €10.7million for their performance in the group stage – three wins, two draws and a defeat – and the €9.5million for reaching the last 16.

Thanks to their strong record in European competitions over the past decade – winning the Champions League once and Europa League twice – Chelsea’s UEFA coefficient was the highest of all English clubs, earning them a further €31million.

A TV pool income of €15.4million brings their total earnings from the competition to date to an estimated €81.9million, although that would increase to €126.9million if they were to win the tournament.

The Blues had to make do without Champions League football in 2018-19, instead winning the Europa League under Maurizio Sarri, for which they received around €44million, almost half what they are likely to earn from being knocked out of the last 16 in the Champions League.

– As ever, thanks to the brilliant work of Swiss Ramble for helping us understand things that make our brains hurt.