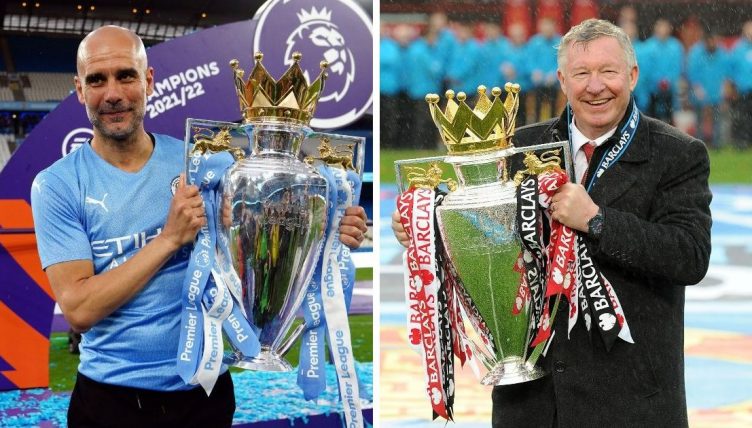 Pep Guardiola arrived at Manchester City back in 2016 with a reputation as the greatest manager in the world – one even capable, perhaps, of equalling Manchester United legend Sir Alex Ferguson’s standing. It’s safe to say Guardiola’s lived up to his billing.

No side in the history of English football has accumulated points at the rate of Guardiola’s City, and in May 2022 they sealed a fourth Premier League title in six years of the Catalan coach’s rule.

That saw the 51-year-old move ahead of Arsene Wenger and Jose Mourinho in terms of the number of Premier League trophies won and moves him behind only United’s long-time boss Ferguson – who is still way, way out in front on 13.

Even the notoriously finicky Roy Keane has been blown away with Guardiola.

After City won the 2022 title with a stunning comeback against Aston Villa on the last day of the season, the former United man said: “This desire to keep going, to get late goals, and subs impacting the game. Credit to [the players] for all that and Pep, Pep is one of the greatest coaches ever.

“People say constantly he’s worked with the top players, but you’ve still got to manage them, you’ve got to have a style of play. They’ve been so consistent over the years, they’re the hardest working team.”

In addition to his league titles, Guardiola has lifted an FA Cup and four league cups as well as guiding City to the Champions League final in 2021.

What we’re interested in here, though, is Guardiola’s Premier League record and specifically how it compares to Ferguson’s.

We’ve taken a look at their overall stats in the Premier League to see how they stack up against one another. Note: Ferguson’s United record only is only including stats from the start of the 1992-93 season.

🗣️"I will not chase him for sure!"

😆Pep Guardiola's reaction to the amount of Manager of the Month awards Sir Alex Ferguson has!

😅Safe to say it will take some catching! pic.twitter.com/aRJrFw6KVv