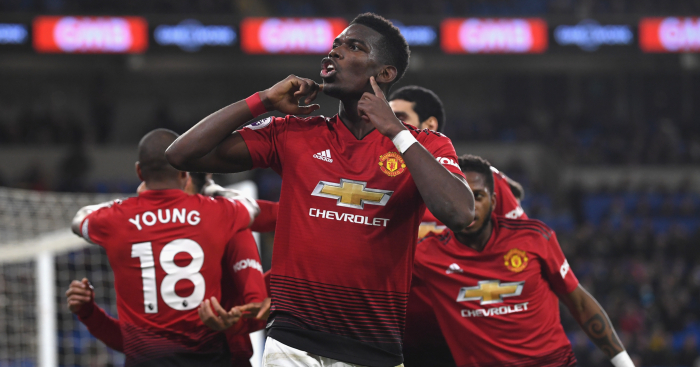 Paul Pogba produced an eye-catching performance against Cardiff City in Manchester United‘s first match since the sacking of Jose Mourinho.

United thumped Cardiff 5-1 in Wales to get Ole Gunnar Solskjaer off to the perfect start as interim manager.

We’ve taken a look at how Pogba’s stats from that win compared to his figures from his last 90 minute outing in the Premier League under Mourinho – the 2-2 draw at Southampton at the start of December.

Before we start with the headline figures, it’s worth pointing out that Cardiff were 16th prior to their clash with United, while Southampton were 18th. So while the results were vastly different, the calibre of opponent was very similar.

Pogba failed to provide either a goal or assist as United came back from 2-0 down at Southampton, but was influential in the victory over Cardiff, registering his first two assists since the win against Everton back in October.

Against both Southampton and Cardiff, Pogba was selected in a midfield trio. However, Nemanja Matic, rather than Marouane Fellaini, anchored against Cardiff.

Looking at the heatmaps from the two games, courtesy of WhoScored, it is apparent the France international was much more involved against the Bluebirds, enjoying a lot more of the ball against Neil Warnock’s men.

It is also worth noting that the 25-year-old enioyed possession further up the pitch.

Given United’s dominance of possession against Cardiff, it should come as no surprise that Pogba made almost twice as many passes against the Bluebirds (100) than he did against Saints (51) at an almost identical success rate (84% vs 84.3%).

One of the biggest criticisms of the midfielder under Mourinho was that he took too long on the ball and would try to overcomplicate matters, and the stats suggest he kept things much more simple against Cardiff.

At Southampton, Pogba completed five dribbles, more than any other player on the pitch, but he was also dispossessed eight times and produced six unsuccessful touches, two figures which were noticeably higher than every other player.

It was a start contrast against Cardiff, when Pogba did not complete a single dribble, but neither was he dispossessed, while he produced just one unsuccessful touch.

Paul Pogba plays passes like this nearly every week yet they go unmentioned.

There is a lot of bias against him for one reason or another.

He's one of the best in the world in terms of passing. pic.twitter.com/mM1HXvzjnh

After the draw at Southampton, Mourinho bemoaned a lack of “mad dogs – the ones who bite the ball all the time and press all the time”.

Many onlookers perceived that as a criticism of Pogba, who made two tackles, one interception and one clearance in that game.

And those figures remained almost identical against Cardiff, with just the interception missing.

After the match, Solskjaer spoke of Pogba’s role in his side: “I think he brings what he can, he’s a quality player. But that’s the same with all of them.

“I’ve worked with Paul before and enjoyed the two days we’ve had and will enjoy working with him and the rest of them in the next four or five months. Paul is capable of playing as an 8, as a 10, as a 6.”