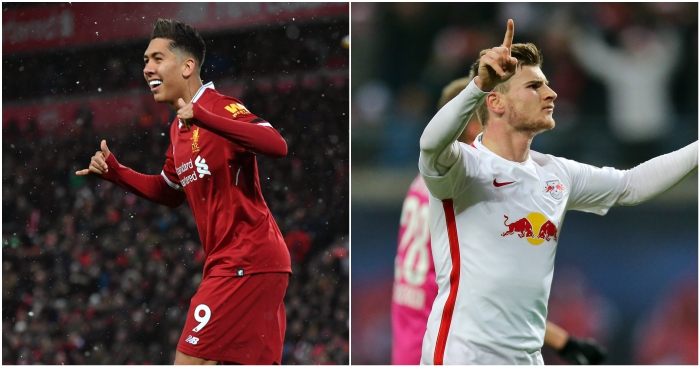 Liverpool have been linked with a move for RB Leipzig forward Timo Werner – but do they even need the £90million-rated man?

Roberto Firmino has made the striker’s role his own at Anfield this season, hitting 21 goals in all competitions for Jurgen Klopp’s side.

The Liverpool Echo claims Klopp is so happy with the Brazilian that he sees no need to sign another forward this summer – but would Werner represent an upgrade? Here’s what the stats say.

Werner has scored 11 Bundesliga goals in 25 games this season, netting at a rate of 0.52 goals per 90 minutes.

Firmino, meanwhile, has grabbed 14 goals in 30 Premier League appearances at a marginally better rate of 0.55 per 90 minutes.

The Brazilian also has seven league assists to his name, while Werner has created just three goals in the German top flight this term.

That means he has scored or assisted 0.66 goals per 90 minutes this season, while Firmino has been directly involved in 0.82 per 90 minutes of league action.

Firmino attempts an average of 2.7 shots per 90 minutes in the Premier League, seeing 1.3 hit the target and 0.7 blocked.

Werner, meanwhile, attempts 3.7 shots per 90 minutes, with 0.7 blocked and 1.7 on target, giving the pair similar rates of accuracy.

Werner at least finds the target 46.2% of the time, while Liverpool’s current No.9 works the goalkeeper with 46.4% of his shots.

When it comes to looking for a team-mate, Werner attempts 23.5 passes per 90 minutes of Bundesliga action.

In Liverpool’s fast-paced, free-flowing side, Firmino has played an average of 37.2 passes per 90 minutes in the Premier League so far this term.

With more than double the number of assists, you would expect Firmino to create more chances on average than the Leipzig front man.

And sure enough, the 26-year-old averages 2.0 key passes per 90 minutes, while Werner sets up a team-mate for a shot just 0.8 times every 90 minutes.

Firmino averages 1.6 successful dribbles per 90 minutes for Liverpool in the Premier League, with a success rate of 67.7%.

Meanwhile, Werner completes an average of just 1.0 dribbles per 90 minutes, being successful 35.5% of the time.

In fact, the German has attempted one more dribble than Firmino this season, but the 26-year-old has made 20 successful dribbles more than Werner.

The pair are similar with unsuccessful touches, with Werner taking 2.7 per 90 minutes and Firmino 2.8.

Every 90 minutes in the Bundesliga, Werner averages just 0.6 successful tackles.

Firmino’s record in the Premier League sees him win the ball back much more regularly, averaging 2.2 successful tackles every 90 minutes.

Firmino also has a better record when it comes to making interceptions, averaging 0.6 per 90 minutes compared to the German’s 0.4.

Steve McManaman: Criticising LFC owners for not spending is ‘nonsense’