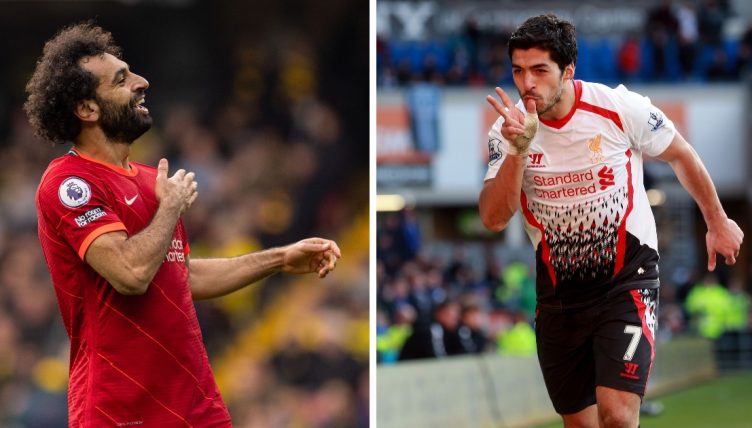 Liverpool’s Mohamed Salah has enjoyed an incredible 2021-22 season – he looks well on his way to securing a third Premier League Golden Boot and could even end the campaign with four trophies.

Salah, who signed for Liverpool back in 2017, enjoyed an incredible debut campaign for the Reds that culminated in him scoring 32 Premier League goals – a record for a 38-game season.

The Egypt international has consistently banged them in since and, remarkably, looks set to enjoy his best season yet in a Liverpool shirt this term.

But how does Salah’s record compare to a former talismanic Liverpool forward?

Luis Suarez was equally outstanding during the 2013-14 season, winning the Player of the Season award and almost guiding the club to their first league title in 24 years.

“Four players stand out in my time at Liverpool and with England,” Steven Gerrard later reminisced in his autobiography.

“The first three all helped me become a better player. They all speak Spanish. Each of them unleashes a wave of emotion in me and in every Liverpool supporter.

“But, ultimately, Luis stands out. He ran and pressed and fought for the ball and ran again – while producing extraordinary moves and sublime goals. There was a sustained period when playing with Luis was like being under a magical spell. He blew me away with his talent.”

The iconic captain never had a chance to play alongside Salah, but you can imagine if he did he would’ve had a difficult dilemma of choosing the best Reds forward of the Premier League era.

We’ve crunched the numbers to see how Salah’s numbers in 2021-22 compare to Suarez’s figures from the 13-14 campaign.