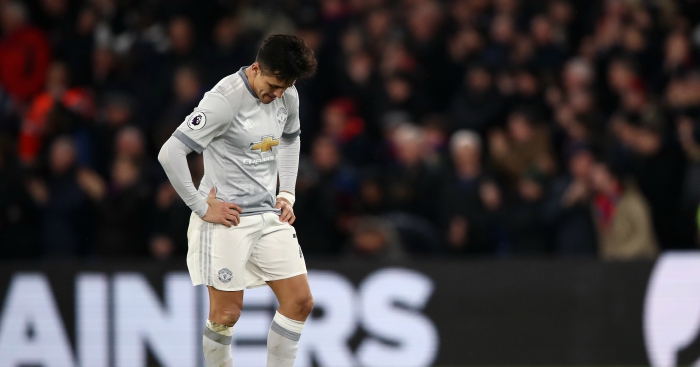 Alexis Sanchez has made a quiet start to life at Manchester United following his January switch from Arsenal.

The Chile international moved to Old Trafford in a swap deal with Henrikh Mkhitaryan heading in the opposite direction, and he has started all five Premier League games since his arrival.

Sanchez scored twice on his debut as United overpowered League Two Yeovil Town, but he’s struggled to have much of an obvious impact since.

And in Monday night’s victory over Crystal Palace, the forward was criticised heavily having conceded possession an incredible 19 times in the first half alone.

We’ve taken a look at his Premier League stats for this season, comparing his performances for his new club to his contributions at Arsenal prior to his move away.

Forget Pogba, all I’ve seen Sanchez do since join United is throw his arms about in frustration, misplace passes and post Instagram stories of his dogs set to 1980s American pop music.

Sanchez’s only Premier League goal for United came in his second appearance, a 2-0 victory over Huddersfield at Old Trafford.

The Chilean has failed to register an assist for his new club, while he managed three before moving up north, averaging 0.18 per 90 minutes.

Alexis Sanchez has been out of tune since joining Manchester United 🎼🚫 pic.twitter.com/9EeLAbaAM7

During the first half of the season at Arsenal, Sanchez played an average of 37.7 accurate passes per 90 minutes. Since moving to Old Trafford, that average has increased to 42.6.

And despite passing more at United the Chilean has seen his passing accuracy increase marginally, from 72.4% to 72.7%.

However, when it comes to playing key passes – a pass which sets a team-mate up for a shot – Sanchez was averaging three per 90 minutes at Arsenal, but that has gone down to 1.4 since his move.

This season at Arsenal saw Sanchez average 2.4 successful dribbles per 90 minutes, with a success rate of 66.7%.

At Manchester United, he has averaged 4.7 successful dribbles per 90 minutes – almost double than when at Arsenal – while his success rate is 72.3%.

Under Arsene Wenger, the 29-year-old was attempting 3.6 dribbles per 90 minutes of football, while this has significantly increased to 6.5 since joining United.

Sanchez averaged 3.8 unsuccessful touches per 90 minutes at Arsenal compared to 3.1 at United, while he was dispossessed on average 2.9 times per 90 minutes for the Gunners, which has increased to 4.5 since his move.

Alexis Sánchez could be the biggest flop in our history and he still would have made the right decision to leave Arsenal.

Sanchez has seemingly worked harder from a defensive point of view since joining Mourinho’s United.

The Chilean is also averaging 0.6 interceptions per 90 minutes for United, rising from 0.4 while at Arsenal.