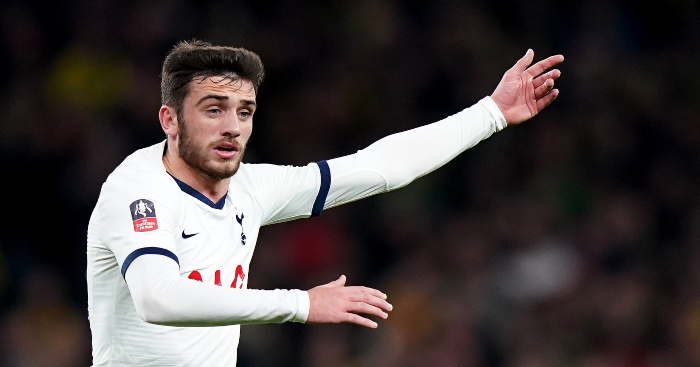 Tottenham have regularly given young prospects chances to shine in the first team and currently have a number of exciting talents on their books.

According to Football Manager 2020’s list of 650 Wonderkids, as compiled by FMScout.com, five are currently on Spurs’ books. That’s defined as “players with high potential ability who are not older than 20 years old on July 1, 2019”.

And we’ve taken a closer look at how the quintet developed in real life over the 2019-20 season.

Tanganga went on Tottenham’s pre-season tour and made his first-team debut against Colchester United in the League Cup earlier this season.

The defender was then thrown in at the deep end by Jose Mourinho in January when he was handed his Premier League debut against Liverpool, but he performed admirably against the league leaders.

“Can we say Tanganga is a new player?” Mourinho said after the game. “He had never played a match for Tottenham in the Premier League. Today he played and today he proved that he can play for us.

“I think when they saw the list [of players], they thought, ‘Oh, what position does this guy play?’ I think now they know. The kid was really good.”

He made another five Premier League appearances in 2019-20 and recently signed a new long-term contract with his boyhood club.

"As soon as I signed for Tottenham my ambition was to break into the First Team. To finally do that is just amazing."

Skipp made 12 appearances for the first team in 2018-19 but struggled to establish himself in the side under Mauricio Pochettino in 2019-20.

He made his first start of the season against Norwich City in the FA Cup and proved why he is so highly-rated at the club with an impressive display.

The midfielder looks to have impressed Mourinho and made three cameo appearances in the Premier League after the restart.

Sessegnon was already regarded as one of English football’s top talents before completing his £25million move to Tottenham in 2019.

The 20-year-old has had an injury-plagued first season at Spurs, making just six Premier League appearances in 2019-20.

He did at least mark his first start for the club with a goal against Bayern Munich in the Champions League, becoming Spurs’ youngest ever scorer in the competition in the process.

“When I came to Spurs, it was tough at the start but I’m starting to find my feet and the more games I play the more confident I am,” Sessegnon said in February.

“I set my standards very high. Everyone sees that. Perhaps I am a bit hard on myself but that’s the way I am. I set the bar very high. Unless I reach those targets I’m not happy.”

Not a bad way to mark your first Champions League start…

Ryan Sessegnon slams the ball home to level for Tottenham!

What a moment for the youngster 🙌 pic.twitter.com/H3gRxP5djs

Tottenham bought Clarke for £10million in 2019 after an impressive breakthrough season at Leeds United but was immediately loaned back to Marcelo Bielsa’s side.

The winger fell afoul of a problem any Football Manager player worth their salt will be aware of as Leeds had one too many loan players to name in their matchday squad, meaning Clarke was largely the odd one out and made just three first-team appearances before being recalled by his parent club.

Clarke was sent back out on loan to QPR, but his fortunes have failed to improve in west London, playing a total of 149 minutes of Championship football with Eberechi Eze and Bright Osayi-Samuel firmly established in the starting XI.

Despite his struggles at club level, the 19-year-old made his England Under-20 debut in September 2019 and later scored the winning goal against Switzerland.

Whenever Clarke crops up, we always make a point of quoting our resident Leeds fan, who insists the teenager could still turn out to be absolutely anything, so don’t be surprised to see him either playing for England or in League One in three years’ time.

The striker is one of the brightest prospects to come out of Tottenham’s academy and recently signed a new long-term contract with the club until 2023.

Parrott has registered six goals and one assist in four UEFA Youth League games this season and also scored a brace against Liverpool in the FA Youth Cup.

There was a huge clamour among Spurs fans for the 18-year-old to get regular playing time after Harry Kane’s injury, but he has made just two substitute appearances for the first team in 2020 and has joined Millwall on loan for the 2020-21 season.

Indeed, after Parrott appeared off the bench in Spurs’ FA Cup defeat to Norwich, Mourinho made a point of saying: “Now people can see that he has to work a lot so don’t think that Parrott is the second Harry Kane because he’s just a young kid that needs to work.”

One positive for Parrott has been making his senior Republic of Ireland debut in November 2019, starting in a 3–1 friendly win against New Zealand.