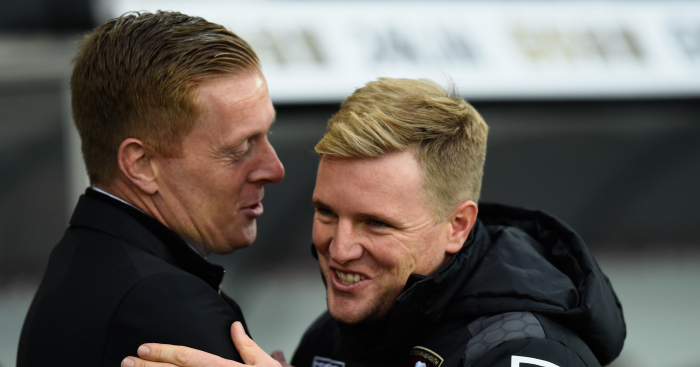 Steven Gerrard and Frank Lampard’s first dabbles with management have put young British bosses back in the spotlight.

Gerrard is catching the eye at Rangers while Lampard has already overseen some notable results with Derby County, with Eddie Howe enjoying his best start to a Premier League season at Bournemouth.

We’ve taken a look at how every British manager aged 40 or under in the Football League is faring this term.

With Bournemouth flying high in the Premier League thanks to a superb start to the season, Howe’s stock has never been higher as a manager.

The 40-year-old has already worked miracles by guiding the Cherries from the brink of relegation out of the Football League to the top flight.

Admittedly only eight games have been played, but Bournemouth are now two points off the top four in the Premier League – and that’s f*cking mental.

And now he’s got the ultimate accolade: Tim Sherwood’s approval.

'Eddie Howe is ready to manage a big side in the Premier League.'

'He would make a massive difference to Man Utd football club..'

Unlike Howe, Monk’s stock has certainly been higher, but the Birmingham City boss is still only 39.

Monk guided Swansea to their highest ever Premier League finish and also impressed at Leeds, only for his time at Elland Road to end sourly, followed by further disappointment at Middlesbrough.

Faced with a tough task at St Andrew’s, Monk helped Birmingham avoid relegation last term and they have lost only twice in 12 Championship fixtures this season, albeit having also only won twice.

“I was a 31-year-old rookie who had never managed before,” Johnson recently told Coaches Voice. “And I was being chucked into an Oldham Athletic side fighting for its life in League One. To me now, it seems like madness.

“But I was fired with enthusiasm. And, more importantly, I was ready. I was five years old when my dad, Gary, started his managerial career at Newmarket Town. From then on, I had a front-row seat from which I could see what football management involved.”

Johnson has followed in his father’s footsteps by taking over at Bristol City, earning plenty of plaudits last season by guiding the Robins into the semi-finals of the League Cup.

Lampard has been tasked with inspiring the Championship’s nearly-men Derby County to that elusive promotion.

Results have been mixed so far – the Rams sit one point off the play-offs with five wins, three draws and four defeats – but Lampard has claimed an early scalp by knocking former mentor Jose Mourinho’s Manchester United out of the League Cup.

Despite having started his managerial career five years ago with Hamilton, Neil is still somehow only 37 years old.

After presiding over a promotion and relegation with Norwich City, Neil took over at Preston, guiding the side to the cusp of the play-offs in his first campaign, although he is now under pressure with the Lancashire outfit languishing in the relegation zone.

Clarke has experienced a rollercoaster four years since being appointed Bristol Rovers manager.

On the final day of his first season in charge, Clarke was reduced to tears as Rovers suffered relegation out of the Football League, but he went on to guide the club to two successive promotions, rejecting an approach from Leeds in the process.

However, The Gas currently sit 21st in League One.

Peterborough chairman Darragh MacAnthony provoked the ire of plenty of Posh fans last term by sacking McCann with the club six points off the play-offs.

McCann’s former side eventually finished seven points off the play-offs, while he was snapped up by Doncaster in the summer, described as “one of the most promising young coaches in football” by Rovers chairman David Blunt.

“I’ve been through many scrapes and rather than somebody who has never been in trouble or had to delve into the reason why things happen, my chaotic career will help me as a manager,” Baton told The Guardian in August.

Given the many controversies which clouded his playing career, Barton may be an unlikely managerial candidate, but he has made a bright start at Fleetwood Town.

The League One outfit finished 14 points outside the play-offs last term but currently find themselves four points behind sixth place.

Like Alex Neil, it’s hard to believe Robinson is still only 38, after starting his managerial career with MK Dons in 2010.

Once tipped as the Next Big Thing in English football management, Robinson is another boss who was smart enough to reject the chance to manage Leeds United under Massimo Cellino, only to throw himself into the frying pan of Charlton Athletic.

Robinson moved to Oxford United but has overseen a miserable start to 2018-19, winning just one of his opening 12 League One fixtures with the side bottom of the table.

I hope Karl Robinson gets more time at Oxford but if he doesn’t then I hope he takes some time out of the game to regather himself. He chose two completely ill-advised, absolutely thankless jobs in Charlton and Oxford and his reputation has suffered because of it.

After a two-year spell in charge of Wrexham, Keates took over at his boyhood club Walsall in March, having already played for the club between 1995-2002 and 2006-2007.

Walsall were among the favourites to be relegated from League One this season, but the 40-year-old has guided them to fifth thanks to a seven-game unbeaten run at the start of the campaign, although he is refusing to get carried away.

“We are not going to be the biggest payers so we can’t compete with everybody,” he told Sky Sports. “Budget-wise, we are among the lower end of the division so let’s not try and smokescreen anything. We know what we are. But we have got some momentum behind us and you never know in football.”

The 40-year-old was still registered as a player at Bury last season, making seven appearances in all competitions, but was appointed the club’s third manager of the campaign after Lee Clark and Chris Lucketti were given the bullet.

Bury ultimately finished bottom of League One and currently sit 11th in League Two, while Lowe was given a two-game stadium ban and fined £1,500 in September after being found guilty of being “abusive, insulting and improper” towards anti-doping testing officials in February.

The Championship Manager legend is now taking his turn in the dugout after being appointed Cheltenham Town manager in September.

Duff is back at the club he started his career as a player after two years in charge of Burnley’s Under-23s. Cheltenham are currently one point above the relegation zone, with their only league wins of the campaign coming under caretaker boss Russell Milton.

A former Gibraltar international, Rotherham-born Artell played for no less than 13 clubs over a 19-year career before being appointed Crewe Alexandra boss in January 2017.

With the club facing relegation from the Football League in his first season in charge, the 37-year-old told BBC Radio Stoke: “Relegation means oblivion for everyone.

“I’ve told the players they have a choice: either work hard and improve, or it’s oblivion. That’s for their careers, this football club and every one of us. They’ll end up in the Conference North on £200 a week with a job as a milkman.”

Crewe eventually finished 17th and ended the following season in 15th, although he may start to feel the pressure with the club currently sat 18th in League Two this term.

Currently flying high in second place in League Two with Exeter City, Taylor is tasked with helping The Grecians go one step further than last season, when they were beaten 3-1 by Coventry in the play-off final.

The 36-year-old, who captained Exeter to back-to-back promotions as a player, was appointed in the summer after Paul Tisdale ended his 12-year spell as manager.

Part of a managerial duo with his brother and assistant Nicky, Cowley’s first taste of management came with Concord Rangers in 2007.

Still only 39, he attracted plenty of attention by helping Lincoln become the first non-league side to reach the quarter-final of the FA Cup in over a century, beating Ipswich, Brighton and Burnley along the way before losing to Arsenal.

Promotion to League Two was secured in the same season and they went on to finish in the play-offs last term, albeit losing to Exeter in the semi-finals.

Cowley was linked with the Ipswich job in the summer following Mick McCarthy’s departure but stayed put with the Imps, who now sit top of League Two.

The former national security adviser to Donald Trump is set to be sentenced in December after being found to have lied to the FBI about his conversations with the Russian ambassador.

Oh, wait. Hang on a minute. That’s the wrong Flynn. Actually, this Flynn, the 37-year-old Newport boss Flynn, currently has the side sitting third in League Two, having also knocked Leeds out of the FA Cup last season.

Hopefully there’s no such confusion in December.

A serious car accident in 2008 ended Way’s career as a footballer, and it very nearly ended his life.

“I feel very fortunate to be alive,” Way told The Guardian in 2016. “At one stage I did ask the passerby that came up to the window to help me just to tell the kids that I love them and that one day I would see them again.

“If it was not for her asking me my childrens’ names, then I do not think I would be here to tell the story today. It was a critical moment in me staying alive because it gave me something to fight for.”

Since that day he has remained at Yeovil Town, fulfilling a number of roles before making the step up to manager in 2015. The club were bottom of League Two when he was first appointed, although he is now under pressure to demonstrate progress after a number of further lowly-placed finishes.

Nine senior players to appear in the Checkatrade Trophy this season