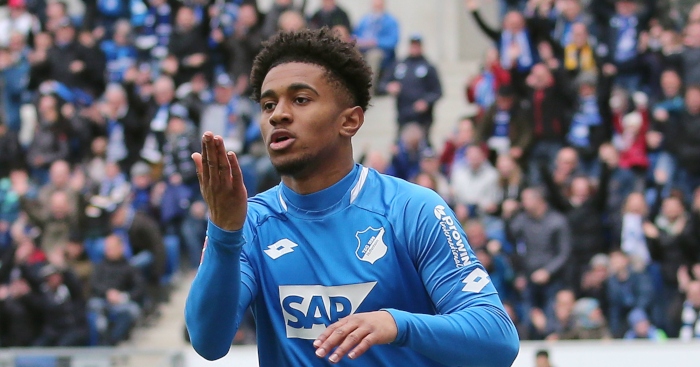 After a few notable success stories, it seems the sight of an Englishman abroad is becoming less rare.

In the frighteningly good Jadon Sancho, the 2018-19 season saw England call up a player plying his trade overseas for the first time since Bursaspor goalkeeper Scott Carson made the squad in 2011.

We’ve checked in on those turning out for top-flight outfits in Spain, Italy, Germany, France and the Netherlands to see how they’ve been getting on.

A full five years have passed since Roberts made his Premier League debut for Fulham, and he’s still waiting on the international debut which many thought would have arrived by now.

The winger struggled to make an impact in the third of his three loan spells with Celtic last season, leading parent club Manchester City to send him out to Girona in La Liga for the 2018-19 campaign.

Roberts has played 20 times for the club, 18 of those coming in the league, but hasn’t managed to find the net.

When McGuane traded Arsenal for Barcelona, it was with a view to linking up with the Catalan club’s B-side before eventually pushing for the first-team.

He got the first part right, playing a fair few games in the Segunda División last season and Segunda B this, but he’s yet to kick on.

Barça B have failed to bounce back after last season’s relegation, despite McGuane playing 16 times.

Vieira’s move from Leeds to Sampdoria was an ambitious one and might end up being one he lives to regret if the Yorkshire club earn promotion to the Premier League, but the England Under-21 midfielder has at least got some Serie A action this season.

After a couple of substitute appearances, he made his full debut in November and has racked up 14 appearances in league and cup.

Vieira’s twin brother Romario also left Leeds in the summer of 2018 but has not earned a move to Serie A.

It’s been quite the rise for young defender Wilmot.

He joined Watford from Stevenage over the summer, made his Premier League debut in October, and found himself playing at the Juventus Stadium in March.

Wilmot was one of three Hornets sent to Udinese in January, alongside Stefano Okaka and Marvin Zeegelaar, He has played just four times in Serie A but couldn’t have chosen much fiercer opponents than Juve, Milan, Lazio and Inter.

The striker has been among the goals for Juve’s Under-23 side, finding the net six times in 32 Serie C games (11 from the bench), and made his Serie A bow against SPAL in April.

However, his path remains blocked by the man he replaced that day, the in-form Italian forward Moise Kean.

READ: Stephy Mavididi: Everything you need to know about Juve’s ex-Arsenal man

Nelson is another to impress in the Bundesliga, taking the No.9 shirt for Hoffenheim and giving parent club Arsenal plenty to think about when he returns from his year-long loan.

Nelson featured for Arsenal under Arsène Wenger, and has seven goals in 22 games – most as sub – for Hoffenheim.

However, just one of those seven has come since the turn of the year.

Former Bayern Munich academy player Okoroji has been on England’s radar for a while and finally made his Bundesliga debut this season at the age of 21.

The defender has played just twice, though, making his first Freiburg start in a 5-1 victory over Augsburg in February.

Okoroji has featured more for Freiburg’s second string in the Regionalliga, playing 14 times this season, but will hope for a real first-team breakthrough next season.

After impressing for Arsenal in the early part of the season, scoring his first goal for the club in the Europa League victory over Qarabag, Smith Rowe was loaned out in the hope of getting some Bundesliga action in Leipzig.

However, in part due to injury, things haven’t quite worked out. He had to wait until April for his debut and is yet to start a game for the Bundesliga club.

We wouldn’t be surprised to see him handed a Premier League loan move next season.

The former Manchester City man made his full England debut in the Nations League in October, but it’s his domestic displays with Dortmund which have caught the eye.

Sancho reached double figures for goals in April and has played a big part for Dortmund as they have run Bayern Munich close in the battle for the Bundesliga title. 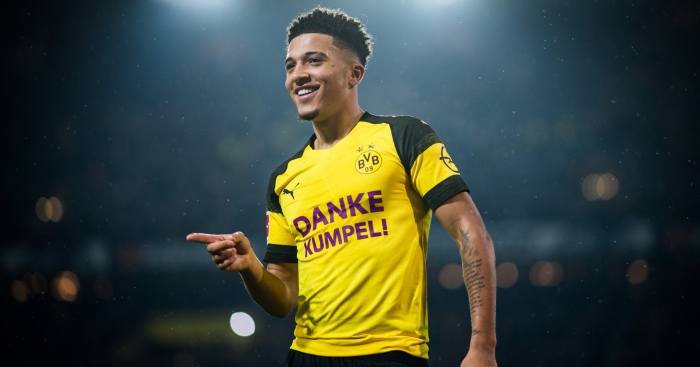 READ: Jadon Sancho is now an integral part of Dortmund’s cake, not just the icing

Having swapped Tottenham for Monchengladbach in the summer, Bennetts was expected to acclimatise to life in the Bundesliga easier than some of his peers given he already speaks German thanks to his Hamburg-born mother.

That is yet to translate to the pitch, with the attacker yet to make his top-flight bow for Monchengladbach, instead spending an injury-disrupted season with the club’s second team.

Still just 21, Egbo had been with Monchengladbach for four years since leaving Crystal Palace. An Under-17 European Championship winner with England, the defender made his solitary Bundesliga appearance to date last season.

However, he has reverted to the second team this season, playing alongside Bennetts in the Regionalliga West.

Collinge’s season has ended in disappointment after being released by Stuttgart in January, but the former MK Dons man’s move to Germany was always motivated by more than football.

“I wanted the opportunity to pursue the educational side of my life because that’s something I value dearly,” he told the Bundesliga’s official website in 2017. “School has always been something I was quite good at and I wanted to always have a plan B.

“In England that opportunity wasn’t there for me, but in Germany I was given the opportunity to go to an international school and study for an International Baccalaureate. That would secure me a good back-up plan if football didn’t work out for me.”

Boadu swapped Manchester City for Dortmund at the same time as Sancho, but the 22-year-old has made a considerably smaller impact at the club, with injuries restricting his development in the second team.

The former West Ham prodigy’s loan move at Augsburg did not get off to the best start as the defender was part of a side which shipped four against Werder Bremen, three against Bayern Munich and five against Freiburg – where he was also sent off – in his first four starts.

Yet Oxford has clearly impressed Augsburg, with Martin Schmidt confirming the club’s intention to make the deal permanent.

Reports initially suggested an £8million fee had been agreed, although this has strangely dropped to £3million in more recent stories, and Football.London insist negotiations have yet to reach such a stage.

Liverpool handed Ojo a new contract when sending the winger on loan to Ligue 1 last summer, but it remains to be seen what future the 21-year-old has at Anfield after a season in which he made just three league starts, failing to either score or assist in France’s top flight.

Another former Spurs prospect who decided to leave north London last summer, Griffiths, like Keanan Bennetts, is awaiting his first-team breakthrough on the continent.

One of England’s Under-17 World Cup winners, Panzo left Chelsea for Monaco in the summer, but despite the turmoil engulfing his new club, the 18-year-old defender has still managed to make his first-team debut in the French League Cup.

And Panzo has been helped adapt to life in France by another former Chelsea man.

“I’ve spoken with Falcao a lot,” he told the FA’s official website. “He looks after me and the biggest thing he’s taught me is to be humble.”

Michael Emenalo has begun to implement his “buy all the kids” strategy at Monaco that worked so well at Chelsea.

With the signing of Jonathan Panzo from Chelsea, Emenalo has now brought in a dozen promising 16 and 17 year-olds from some of the best youth set-ups in the world.

After 15 goals for Sunderland in the first half of the season, Maja swapped League One for Ligue 1 in January.

Unsurprisingly, the 20-year-old has been much less prolific but got off the mark in his most recent outing for his new club.

There are just three players on loan at Vitesse from Chelsea this season, with Clarke-Salter becoming a mainstay of the team after a dismal spell at Sunderland last term.

After rejecting approaches from Rangers and the Championship, the defender has made 36 appearances in all competitions for Vitesse this season, following in the footsteps of Mason Mount in impressing in Eredivisie.

“Playing games can open up so many opportunities,” he told The Guardian in October. “Mason is an example of that. He didn’t play much for the first couple of months at Vitesse, then all of a sudden he ripped the league apart.”

Perhaps a lesser-known name than Clarke-Salter, Clark rejected a new contract at Hull City in the summer to join Vitesse.

After a slow start, the left-back has established himself in the side over the second half of the season, scoring once and providing four assists to help Vitesse to fifth.

Having previously been compared to Lionel Messi by Mauricio Pochettino, Edwards’ fledgling career has failed to live up to the hype, with the attacker playing just 15 minutes in the League Cup for Spurs and having a loan spell at Norwich City cut short after just one appearance amid questions about his attitude.

A season-long loan at Excelsior has given the chance for the 20-year-old to finally play regular first-team football, and he has impressed in the second half of the season, with two goals and four assists to his name.

“He is of a bizarre level, what he can do is really not normal,” Excelsior team-mate Jeffrey Fortes said in February. “I have not experienced a better player in my career, and Mauricio Pochettino did not make that comparison with Messi for nothing.

“He was referring to his way of moving and there is really something in him.”

Spurs fans, do you think Marcus Edwards deserves a last shot at making it into the 1st team this summer?

He's kept his head down and worked hard at Excelsior, but was it enough to impress Poch? Last chance saloon before his contract expires. #THFC #COYS pic.twitter.com/Dpmpl2TCXw

The former Arsenal man moved to Willem II in 2017 but spent the second half of last season on loan at second-tier outfit SC Cambuur.

Crowley returned to Willem II and has caught the eye this season, scoring five times and assisting a further seven as they reached the Dutch Cup final, with the former England youth international switching his allegiance to the Republic of Ireland after impressing Mick McCarthy.

Having spent the entirety of his senior career in League One with the likes of Bradford City and Bury, the former Manchester City academy player made the leap to NAC Breda in the summer but has been in and out of a side which sits bottom of the Eredivisie.

The Aston Villa defender returned to England in January after playing only nine minutes for FC Emmen, who we hadn’t heard of either.

After nine years on the books of Crystal Palace, Kaikai decided to end life as a serial loanee by joining NAC Breda on a permanent deal in January, but he is yet to establish himself at his new club.

Stephy Mavididi: Everything you need to know about Juve’s ex-Arsenal man