How the Barcelona contingent is making a difference at Everton 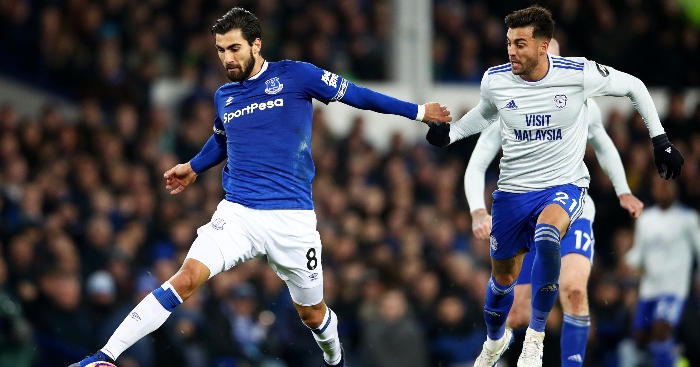 The words ‘Barcelona trio arrive’ might sound like some kind of made-up nonsense, but it actually came true for Everton over the summer when Lucas Digne, Andre Gomes and Yerry Mina all arrived on the eve of the new season.

While they didn’t immediately hit the ground running, or had to wait their turn, they’re all starting to settle in nicely now.

After an inconsistent start to the season, Everton look like they’re realising their potential, moving up to sixth on the weekend, and their new arrivals are certainly playing their part.

If you believed everything you read in certain Barcelona-supporting corners of the internet, you might think that Gomes, Mina and Digne should have sacked in their careers as professional footballers and done something else with their lives, such was the extent of their heinous crimes on the football pitch.

But given the team has won two trebles over the past decade and played some of the most revered football ever played, it’s fair to say Barcelona fans have high standards and might just lack a sense of perspective.

It’s true that none of the trio were glowing successes in Catalonia, but intermittent first-team opportunities can’t have helped.

And it shouldn’t be forgotten that, for Roma, Valencia and Palmeiras respectively, they were all deemed good enough to sign for Barcelona in the first place, which shows how much promise they’ve shown previously.

Barça even gazumped Real Madrid for Gomes’ signature, such was his stock in Spanish football a couple of years back.

That these three didn’t make it at Champions League-demanding Barcelona doesn’t mean they can’t be extremely useful elsewhere, as is proving to be the case this season.

So often the scapegoat in Barcelona, Gomes was outspoken about the toll the criticism was taking on his mental health.

It will be a welcome change to be a fan favourite, and Everton supporters have certainly taken the midfielder, who is only on loan, to their hearts.

Composed on the ball, he’s also tenacious and dedicated to closing down space and winning the ball back.

He’s symptomatic of the renewed sense of strategy that Everton approached the transfer market in the summer. He perfectly suits sitting in a midfield two, allowing Gylfi Sigurdsson to look his best, further forward in the No.10 role.

Gomes has only played five times in the Premier League so far, but he is second in the Everton squad for passes (53.8) and pass success rate (87.4%) per game, and leading the way in terms of dribbles (1.8) per game.

The Colombian had to wait for his chance because of a foot injury which delayed his debut following his £27million transfer, but he’s grabbed his opportunity since Kurt Zouma had to sit out the game against parent club Chelsea.

With back-to-back clean sheets in his first two games, Mina looks a surefire choice to hold down his starting spot.

Thrown in at the deep end against Chelsea, he had positional awareness and pace to keep Eden Hazard and Alvaro Morata at bay, while against Cardiff, he was totally assured in defence and mopped up all the agricultural long balls that Neil Warnock’s men threw at them.

Hugely physical and prolific at set-pieces too, it’s only a matter of time before he heads in from a Sigurdsson ball in. He’s tailor-made for the Premier League.

Alongside Mina, Digne brings youth and vigour to what was a creaky back four, forcing stalwarts Leighton Baines and Phil Jagielka into the roles of back-ups.

Digne is always looking to get forward but rarely found out of position at the back – in his 11 Premier League appearances he has been dribbled past an average of 0.3 times per game, a joint low with Baines and Seamus Coleman among Everton’s defenders.

And like Baines at his best, the Frenchman is also capable of sending a killer ball into the box and has created an average of two chances per game so far, the second most in the Toffees’ squad behind Sigurdsson.

Really impressive start to life at Everton from @LucasDigne, who is following in Leighton Baines’ footsteps as an excellent creative force from left-back.

In the last couple of years, the ‘big six’ have started to pull away and leave the rest of the league behind them, leaving Everton in their own existential vortex: in 2016-17, they finished eight points behind sixth-placed Manchester United but fifteen points ahead of eighth-placed Southampton

Last season they managed not to finish in their own designated position in the table as things went awry at the end of Koeman’s reign and Sam Allardyce arrived, posing new conundrums for the Everton faithful.

Now, with Manchester United struggling and three players in their squad recently viewed as good enough for Barcelona, supporters can dare to dream again.