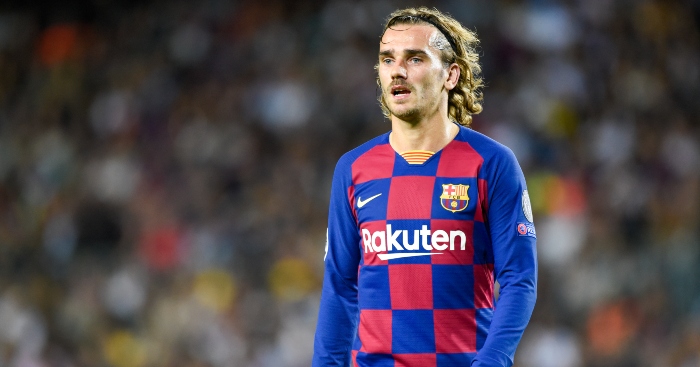 With the international break upon us, now is a good time to take stock of how some of the players to move in some of the summer’s most high-profile deals have fared so far this season.

While the biggest clubs are generally able to sign the best talent, there is a weight of expectation around such transfers which has the potential to make things difficult for players.

We’ve taken a look at how the new signings at some of the biggest clubs in Europe have performed to date in 2019-20.

Barcelona’s summer transfer window was dominated by the headline arrivals of Frenkie de Jong and Antoine Griezmann for combined fees which fell just short of €200million.

De Jong has appeared in all eight of Barca’s opening La Liga fixtures, plus their two Champions League group stage matches, grabbing a goal and assist in a 5-2 win over Valencia.

The 22-year-old has slotted into a midfield trio alongside Arthur Melo and Sergio Busquets, displacing Ivan Rakitic, with only Toni Kroos recording a better passing accuracy in La Liga and only three players completing more than his 18 dribbles.

Griezmann, meanwhile, has scored three goals and provided two assists in La Liga, although he is still to become fully comfortable as a left winger, with Arturo Vidal telling Sport: “It has been difficult for him to integrate and adapt.”

A busy summer for Real Madrid saw Eden Hazard lead seven new arrivals at the Bernabeu, with the Belgian arriving in a deal worth a potential £130million. A hamstring injury ruled the forward out for the first month of the season, but he grabbed his first goal and assist for the club in a 4-2 victory over Granada in the final match before the international break.

Luka Jovic, a €60million signing from Eintracht Frankfurt, has yet to score for Real and has started just twice in La Liga. His Los Blancos career so far totals 222 minutes and eight shots – none of which hit the target.

Young Brazilian duo Rodrygo and Eder Militao have played a combined 230 minutes after Real spent €95million on the pair, while €48million Ferland Mendy has started three times as he vies for the left-back berth with Marcelo.

Eden Hazard is off the mark at Real Madrid 👏

Felix has shown flashes of brilliance in scoring three goals and providing an assist, although their next biggest signings in €40million Marcos Llorente and €25million Mario Hermoso have so far flattered to deceive.

The Spanish duo have been overshadowed by the immediate impact of Kieran Trippier and Renan Lodi, who have proved able replacements for long-serving full-backs Juanfran and Felipe Luis.

Bayern announced much of their business before the end of the 2018-19 campaign with the signings of Benjamin Pavard (€35million) and Lucas Hernandez (€80million), while young striker Jann-Fiete Arp (€2.5m) had already agreed to join the club.

Pavard and Hernandez have slotted straight into the defence, with the duo operating at both full-back and centre-back, while Bayern then added Ivan Perisic and Philippe Coutinho on loan, plus another prospect in midfielder Mickael Cuisance.

Both Perisic and Coutinho have hit the ground running, each scoring twice in Bundesliga and providing assists domestically and in the Champions League.

Philippe Coutinho at Bayern Munich has been absolutely great to watch. One of the best players finally enjoying his time once again. Baller. 🇧🇷🧪💫 pic.twitter.com/KOE4alWvQz

Abdou Diallo aside, Dortmund did not lose any of the key players that took them close to the Bundesliga title in 2019-20 and instead bolstered their squad with the arrivals of Julian Brandt, Thorgan Hazard, Nico Schulz and Mats Hummels, who all cost in the region of €25-€30million.

Despite Dortmund sitting eighth following an indifferent start to the season, Hazard has impressed in providing four assists – with only Jadon Sancho managing more in the entire league to date.

Hummels has also re-established himself at centre-back having returned to his former club, although Brandt and Schulz have been in and out of the side since.

Arguably Juventus’ most impressive arrival has been the return of Gonzalo Higuain. After disappointing loan spells at Milan and Chelsea, the striker has scored crucial goals against Napoli and Inter, as well as bagging in the 3-0 win over Bayer Leverkusen in the Champions League.

Juve’s headline signings have struggled, however, with Matthijs de Ligt making a number of errors for both club and country after joining in a €75million move from Ajax.

Likewise, the free transfers of Aaron Ramsey and Adrien Rabiot were made amid expectations Blaise Matuidi and Sami Khedira would depart, only to ultimately remain in Turin and leave Maurizio Sarri with a selection headache.

Injury has disrupted Ramsey’s start to life in Serie A, although he has scored once in five appearances and is faring better than Rabiot, who is already being linked with a January move after playing just 194 minutes.

Adrien Rabiot 'is considering leaving Juventus due to a lack of game time' and has 'held talks with Barcelona' over a move despite only joining from PSG three months ago https://t.co/oykBiDJOBq

PSG seemed to attempt to rectify errors of previous windows this summer by signing some players that don’t mind…y’know, working hard and defending and stuff – at least until Mauro Icardi arrived on deadline day.

Former Everton man Idrissa Gueye has been a revelation in midfield, Abdou Diallo has slotted in next to Thiago Silva at centre-back and Pablo Sarabia has added work-rate to the forward line with Kylian Mbappe struggling with injury.

The form of Gueye and Marquinhos’ transformation into a central midfielder has meant Ander Herrera has been used as a rotation option, yet he has still collected more assists than yellow cards in Ligue 1, which seems like an achievement.