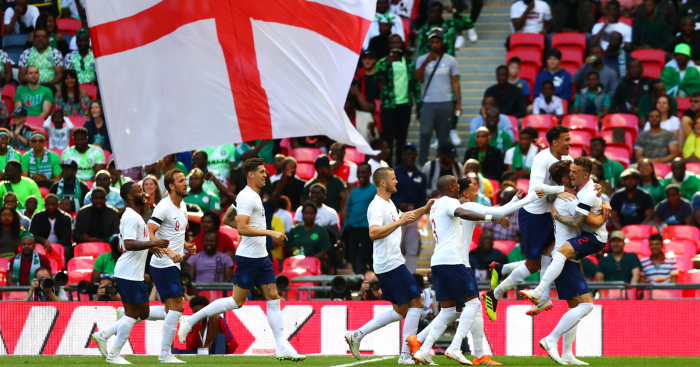 A good first-half performance saw England defeat Nigeria in their first of two warm-up matches ahead of this summer’s World Cup.

Gary Cahill and Harry Kane were on target for Gareth Southgate’s men in the first half before Alex Iwobi pulled one back for a re-energised Nigeria, who improved significantly at half-time.

We’ve taken a look at the player ratings from the BBC, Guardian, Sun, Daily Mirror and Daily Mail to see how England’s players did, with the opening game in Russia just two weeks away.

The Everton goalkeeper was relatively untested throughout the Nigeria match, though manager Southgate dropped a big hint that he will start against Tunisia.

“There was a bit of a statement with the selection of Jordan. His decision making was good although he was rarely tested,” Southgate said.

The Guardian was the only publication to award more than a six, describing Walker as “the most composed of England’s back-three.”

Both the BBC and the Mirror described Stones as elegant but picked up on his wastefulness in possession, which could be punished by tougher opponents.

After raising questions over his recall to the World Cup squad, Cahill capped off a promising performance with an excellent header to open the scoring.

The Sun named Trippier their star man, after his perfect corner delivery provided Cahill’s goal, and he proved he can be a danger on set-pieces going to Russia.

“Solid and unspectacular as ever,” said the BBC of Dier’s performance, though the general consensus is that he is behind fellow midfielder Jordan Henderson in the pecking order.

Technically playing alongside Dier, Alli often ventured forward and looked effective in providing a burst of pace from midfield, and he still plays a key role in bringing that spark to England’s side.

Provided an attacking threat down the left-hand side but did become slightly one-dimensional when cutting inside. He was replaced after being asked more questions defensively in the second period.

However much Ashley young has had a great season, and I rate him, playing with a right footer on the left in defence just doesn't work, limits every option when bringing the ball back, always comes back

All five publications awarded Lingard a six. He looked a threat but may still have work to do to secure a starting spot in Russia.

It was a decent performance from Sterling who was always looking to get involved and make something happen, though his finishing was wasteful and his dive was disappointing.

Got on the scoresheet yet again despite the majority of the game passing him by. “It’s what Kane does best – waits for the opportunity and takes it,” wrote the Daily Mail.

Harry Kane drills one low and makes it 2-0 to @England against Nigeria! pic.twitter.com/2M11JHxjh0

There was little impact from most substitutes, but Danny Welbeck was marked down for being wasteful with a couple of sniffs.

“First touch could do with work,” wrote the Mail.