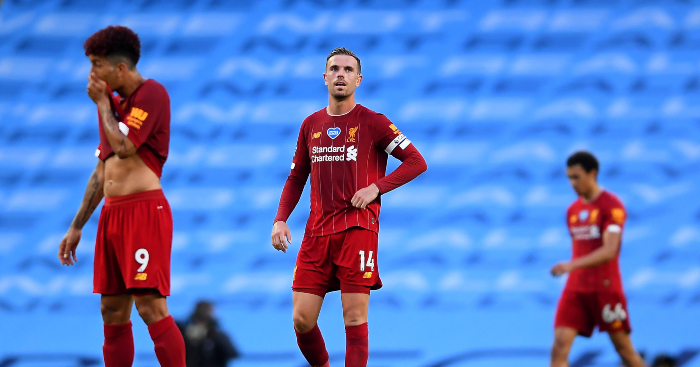 Liverpool were heavily beaten by Manchester City in their first game after being confirmed as champions – but how have previous Premier League winners fared after securing the title?

City’s 4-0 victory at the Etihad cut the gap to a mere 20 points, and it would be hard to blame Liverpool if they did take their foot off the gas, but their fans will undoubtedly want them to keep going with records at stake.

We’ve taken a look back at the last 10 Premier League champions prior to Liverpool to see how they responded once the title had been confirmed.

City were unable to relax at any stage last season as Liverpool pushed them all the way by losing just once across the entire league campaign.

Pep Guardiola’s men only secured the title with a 4-1 victory over Brighton on the last day of the season, meaning they had won their final 14 league games of the campaign.

They carried that ruthlessness into the FA Cup final, hammering Watford 6-0 at Wembley.

A day after City won 3-1 at Tottenham on April 14, Manchester United slipped up at home to West Brom to confirm the title was heading to the blue half of Manchester.

City were still chasing a number of records before the end of the campaign and won four of their remaining five games, drawing with Huddersfield in the other, as Gabriel Jesus’ 94th-minute winner on the last day of the season at Southampton ensured they became the first Premier League team to reach 100 points.

Throwback to when Gabriel Jesus made City Centurions against Southampton! 😍#ManCity #MCFC pic.twitter.com/DhZV92E9dC

After Antonio Conte had masterminded Chelsea’s fortunes by switching to a 3-4-3, the Blues were fairly comfortable and sat at the top of the table from matchday 12 onwards.

But they were made to wait until May 12 before being confirmed as champions, when Michy Batshuayi hit a late winner at West Brom.

Chelsea then won their remaining two matches, 4-3 against Watford and 5-1 against Sunderland (featuring that John Terry farewell), but were upset by Arsenal in the FA Cup final.

The Foxes then beat Everton 3-1 before ending their season with a 1-1 draw against Chelsea, the team they had taken the title from and the team which ultimately took their title the following season.

A season dominated by Jose Mourinho’s Chelsea from the first minute to the last, Eden Hazard’s winner against Crystal Palace put the Blues 16 points clear at the start of May to confirm their inevitable title victory.

Chelsea then eased up in their remaining three matches, drawing 1-1 at Liverpool before losing 3-0 at West Brom. They then rounded off their campaign with a 3-1 win over Sunderland.

In similar scenes to 2017-18, City needed to win their remaining five matches of the campaign to pip Liverpool to the title following their infamous slip.

City held their nerve on the last day of the season to beat West Ham 2-0, meaning Liverpool’s 2-1 win over Newcastle proved too little too late after costly dropped points against Chelsea and Crystal Palace.

After Manchester City lost to Tottenham on April 21, Robin van Persie fired Manchester United to the title the following day with a hat-trick in a 3-0 win over Aston Villa.

United won the league by 11 points, despite drawing with Arsenal and losing to Chelsea in their next two fixtures.

A 2-1 win at Swansea proved United’s final three points under Sir Alex Ferguson before his final game descended into the madness of a 5-5 draw at West Brom.

After beating second-placed Chelsea on May 8, United needed just one point from their remaining two fixtures to claim the title.

They got that with a 1-1 draw before relegating Blackpool with a 4-2 win at Old Trafford.

Carlo Ancelotti’s side may have broken records for the most goals scored in a season, but they still had to wait until the final day of the campaign before confirming their title victory.

They did so with an emphatic run of victories in the final three games, beating Stoke 7-0, Liverpool 2-0 and Wigan 8-0.

Upon the Premier League’s conclusion, they then beat Portsmouth 1-0 to lift the FA Cup, winning their first ever Double.