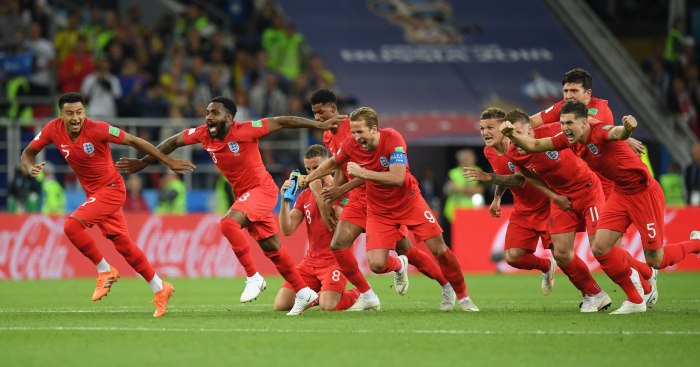 England won their first knockout game at a major tournament in 12 years and also ended their penalty hoodoo by beating Colombia in a shootout on Tuesday.

Harry Kane’s penalty appeared to have secured victory for England, only for Yerry Mina to score with a header in the 93rd minute.

After a goalless period of extra-time, the Three Lions won their first penalty shootout since 1996 – and their first at a World Cup.

Jordan Henderson missed from the spot to give Colombia an advantage, but Mateus Uribe hit the crossbar before Jordan Pickford saved from Carlos Bacca, allowing Eric Dier to hold his nerve and wrap up the win.

We’ve looked at how the starting XI were rated by five media outlets – the BBC, Telegraph, Independent, Guardian and Mirror – and calculated an average rating.

England’s “hero of the day”, according to The Guardian, who gave Pickford his highest mark of nine.

The goalkeeper did indeed produce heroics in the shootout, and it is a shame that his contender for save of the tournament was overshadowed by Mina’s header from the resulting corner.

As has been the case for Walker throughout the tournament, there have been moments when the defender has looked impressive in his new role.

But, as noted by The Independent, he also “looked unsure in the back three at times”, and his error presented Juan Cuadrado with a late chance.

The Telegraph were seemingly impressed, however, awarding the Manchester City man an eight.

Another player awarded a solitary eight from The Telegraph, Stones produced another assured performance in the middle of the back three.

“Diligent and unflappable in centre of defence. Played with intelligence and discipline throughout,” wrote The Mirror.

The pick of England’s back three, Maguire won numerous aerial challenges and also embarked on a couple of his now trademark surges down the left-hand side.

According to The Telegraph, this was his “best game in an England shirt”.

Of all the England players, Gareth Southgate’s son wears a Harry Maguire shirt.

Man knows class when he sees it. pic.twitter.com/Nwz11jMfol

Trippier’s deliveries from right wing-back and dead-ball situations are one of the main sources of England’s attacking threat, although the Tottenham man himself suggested he should have blocked Mina’s header on the goalline.

He atoned for any error with an excellent penalty in the shootout and was labelled  “a rock all night long” by The Independent.

A solid display in the middle of the park was almost tarnished by his miss in the shootout. Thankfully for Henderson, his team-mates bailed him out, and he lives to fight another day.

It would have been a travesty if Jordan Henderson had to fill the role of fall guy. He stepped up, he’ll step up again. That’s how he is. One day, maybe, he’ll get widespread recognition for what a good player he is on so many levels.

The one player England possess who was capable of matching Colombia’s sh*thousery, it was another solid if unspectacular display at left wing-back for Young, who was eventually replaced by Danny Rose.

Awarded a five by the BBC and Guardian, Alli was making his return from injury and appeared to still be getting up to speed.

“Too peripheral throughout,” was the verdict of The Mirror.

Given a five by the BBC but sevens by The Telegraph and Mirror, Lingard produced plenty of effort but it just did not happen for any of England’s attacking midfielders.

It just isn’t happening for Sterling in an England shirt, and it was another display featuring moments of both promise and frustration.

The BBC were clearly not impressed by England’s trio of attacking midfielders, giving Sterling a five too.

Dispatched another two penalties – one in normal time and one in the shootout – with aplomb, and led the line well.

“The perfect captain so far in this tournament,” suggest The Independent, who, along with the BBC, awarded the striker a nine.