What pundits have said about the anti-Glazer protest: Neville, Keane, Wenger 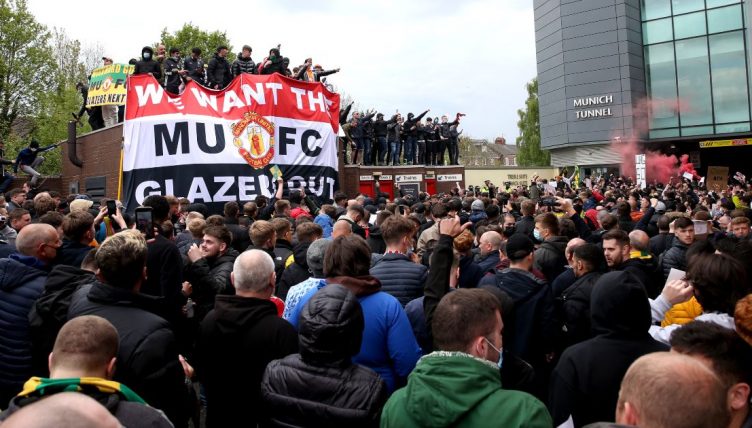 Manchester United fans hit the headlines over the weekend after breaking into Old Trafford to protest against the Glazer family’s ownership of the club.

The Glazers have never been popular figures at the club but the protests follow United’s decision to join the European Super League last month, before subsequently pulling out.

We’ve taken a look at what pundits and journalists have said about the protests at Old Trafford.

“This is a consequence of the Manchester United owners’ actions two weeks ago,” Neville said on Sky Sports. “There is a general distrust and dislike of the owners, but they weren’t protesting two or three weeks ago.

“The Glazer family are struggling to meet the financial requirements at this club and the fans are saying that their time is up.

“My view is quite simply that they’re going to make a fortune if they sell the club and if they were to put it up for sale now I think the time would be right, and it would be the honourable thing to do.

“There’s huge discontent, not just across Manchester United fans, but I think for football fans up and down the country and I think they are just saying enough is enough.

“The Glazer family have been resilient and stubborn for many, many years. I think they are struggling to meet the financial demands that this club needs and have done for some time.”

Good on @GNev2
Club ownership is not like buying the local chip-shop
Time to regulate & reform
Putting the fans at the centre pic.twitter.com/YUB982Fv8v

“There’s been a build-up in tension, whether it be about ticketing, poor communication, things going on in the background,” Keane said on Sky Sports.

“The leadership of the club has not been good enough. When they look at the owners, they feel it’s just about making money. The United fans have looked at the Glazers and thought enough is enough.

“They’re doing it because they love the club. Some people won’t agree with it, but sometimes you have to put a marker down for people to take notice. This will go out all over the world and hopefully the owners of Manchester United will sit up and take note. These fans are deadly serious and this is just the start of it from United fans, I can guarantee you.”

“First of all you always have to know whether this is the majority,” Wenger told beIN SPORTS. “We live in a society where the protesters aren’t always the majority. The media only consider the minority of protesters.

“I would say as a football fan I was against the Super League project because it ignores what makes football great.”

“The frustration with the ownership and I must say I’m obviously a Liverpool supporter in this stadium with Manchester United fans coming past me, but I do think in this situation, football rivalry goes out of this,” Carragher said on Sky Sports.

“Listen, it’s been peaceful, there’s no problem in the stadium, I’m unsure about outside the stadium, but it’s been a peaceful protest. They’re very unhappy with their owners, not just of what they’re doing in terms of buying a striker or buying a player in the summer, I think as supporters and how they’ve been treated at this club and how they’ve gone about it.

“The frustration comes from that and it’s obviously heightened with what happened with the Super League. Yes, we all want to see a game of football, we don’t want to see any trouble but I can’t stand here and have a go at Manchester United fans.

“My own supporters, Liverpool, probably 10 or 15 years ago were doing these type of things, marching outside of stadiums to get rid of Hicks and Gillett.

“I would not have a go at any Manchester United fan as long as it’s peaceful and there’s no trouble. Football means a lot for a lot of people and Manchester as much as anybody. A peaceful protest and they’ve only got themselves to blame, the ownership.”

Wow, hundreds of fans have got onto the pitch at Old Trafford, they’re protesting against the ownership of the club. 😱 #MUFC pic.twitter.com/izEkC2LLr2

“We’ve talked about it so many times now and you do feel for the fans because after the year they’ve had with Covid, to try and take away the crown jewels is never good,” Richards said on Sky Sports. “They’ve gone to breaking point.

“I think the lads have mentioned, it was peaceful. No one really was causing too much trouble. And it hurts.

“The good thing about it is that the fans have still got a voice. A lot of people are saying, ‘Well, the fans haven’t got a voice anymore.’ They have. We’re supposed to be kicking off in 20 minutes. It’s not happening.

“So as long as it’s done peacefully and properly, I support the fans in their protest.”

“Whether the Glazer family have been good or bad, what they did two weeks ago is not acceptable and an apology is not good enough,” Neville said on Sky Sports.

“Joel Glazer saying he wants to rebuild the trust with the football fans of this club, he never had the trust, he’s never communicated with them, he’s never spoken to them. He’s never said a word.

“Today we can be angry, the game may not go ahead, the fans are angry, they’ve protested peacefully and we have to accept that you’re allowed to protest in this country, it’s every person’s right.

“But tomorrow it’s about reform and regulation because there are six or seven people in English football who have it under their control and that control has to be taken away from them.” 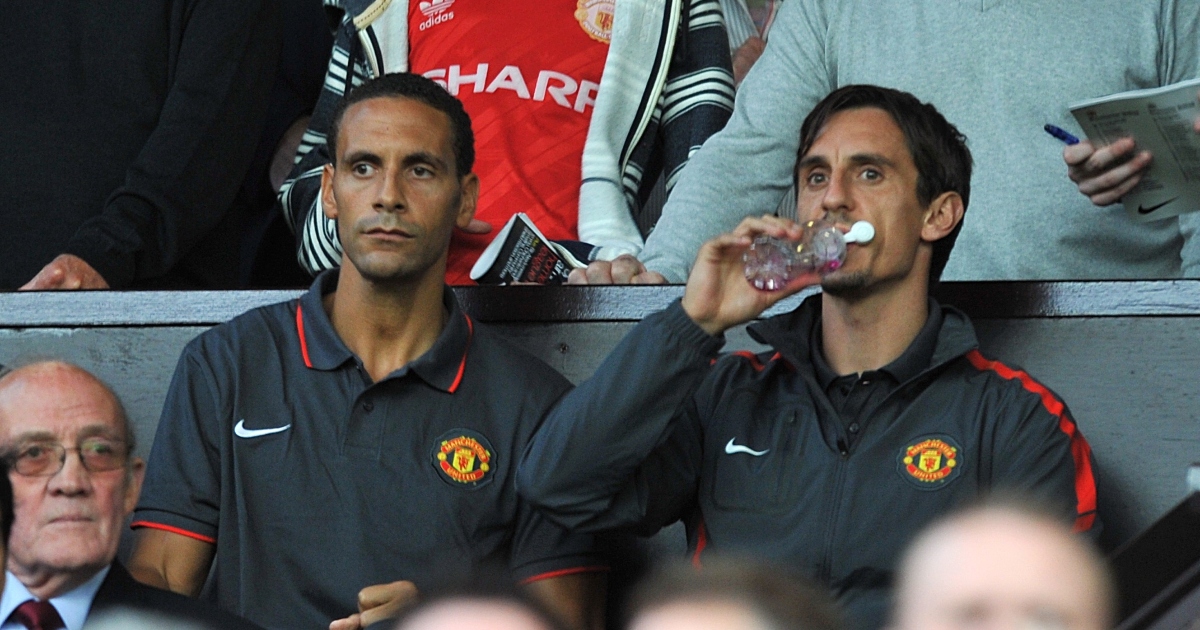 “I don’t think it will (have an impact). The Glazers, since Fergie retired, have given successive managers over a billion pound to spend. I think it’s £719million net spend over the eight years,” Souness told Sky Sports.

“I think it’s born out of United not being top dogs as much as what happened last week, I think that’s another excuse to have a go at them. These are serious, serious business people, I don’t think this will impact on their thoughts. I really don’t.

“We live in a country where you can demonstrate, you can vent your feelings, you’re allowed to do it, but I still don’t see it impacting on the Glazers one little bit. If you think you can bring serious pressure to serious business people who live 3,000 miles away, across the Atlantic, that it will drive them to accept a discounted offer for Manchester United, that will not happen.

“They’ve had to put collateral in, you don’t just go to the bank and say I want to buy Manchester United, I’ll need £500million or however much it costs to buy, without committing some sort of collateral.

“They’ve risked things to buy Manchester United, since then, they’ve given successive managers fortunes to spend. It’s only since Fergie stopped that the success has stopped and I think that irritates supporters and they have become the focus of their anger. I think it’s slightly misdirected.”

“I understand the fans frustration and their anger, totally acceptable because of what has gone on in the last two weeks regarding the European Super League,” Shearer said on Match of the Day 2.

“Football was nearly taken away from us as we know it and I’m all for protesting but not like that.

“You can’t protest like that, we’ve seen events at other football clubs because they’re not happy but when you get fans breaking into stadiums, hurting police officers and smashing glass to get into the hospitality then that’s not the way to do it. That’s not acceptable.”

“I wouldn’t call it a peaceful protest,” Jenas said on Match of the Day 2. “I think they overstepped the mark and I think in doing so you’re clouding the message that you’re trying to put out there as fans. 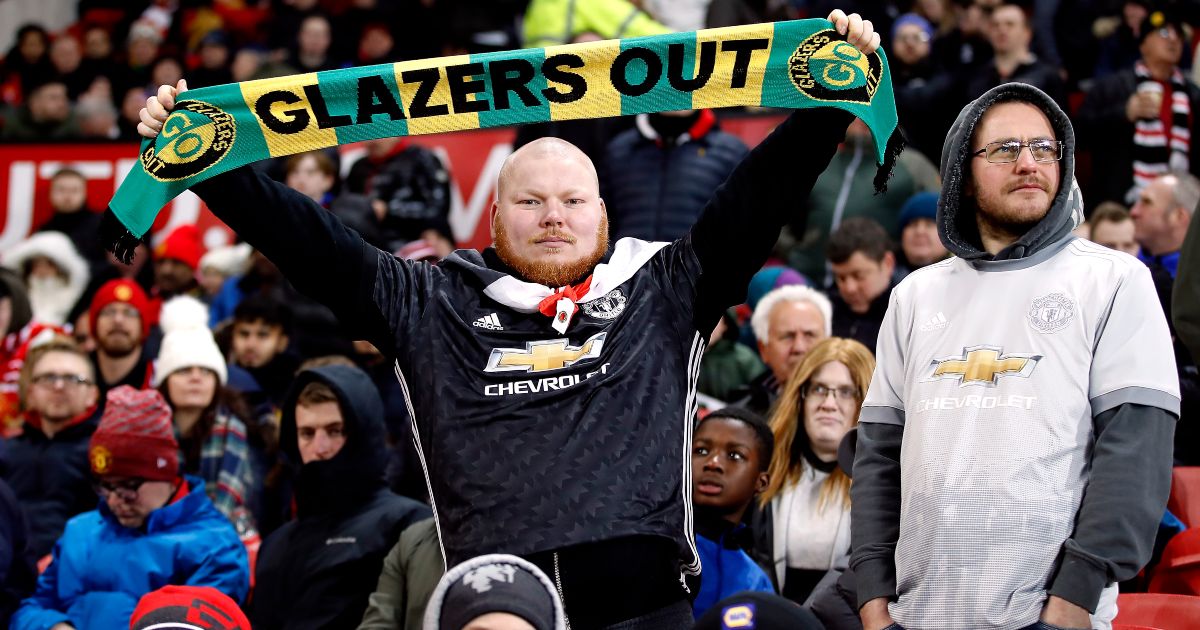 READ: Remembering when fans tried to buy Manchester United from the Glazers

“United’s fans had every right to stage a peaceful protest – as the majority did – against the club’s owners on Sunday even though they know it will not get them anywhere,” Ladyman wrote in the Daily Mail.

“The Glazers are not listening. They never were and never will. But a protest does not lose validity just because it does not bring about change. There is such a thing as protest for protest’s sake.

“It was demoralising to observe, nonetheless, and that feeling only hardened when confrontations with police on the Old Trafford forecourt grew violent late in the afternoon.

“A lawful day of demonstration then starts to look like football hooliganism and that is the last thing the sport needs in 2021.”

“Those of us regular attendees at Old Trafford, who were there, and have been chronicling the shameful story of the Glazers for 16 years, were able to peer through the smoke of the fans’ flares and fury, and see that the enemy within is not some trespassing fans but the odious owners bunkered up in Florida,” Winter wrote in The Times.

“The overwhelming reaction here is not exhilaration but sadness,” Liew wrote in The Guardian.

“As tempting as it was to get swept up in the insurgent thrill, what really unfolded at Old Trafford on Sunday was an act of pure desperation: the last refuge of a group of men and women whose every last avenue had been closed to them. Fan power? Alas, no. It was, in many ways, the ultimate expression of fan powerlessness.

“How did we reach this point? How has one the world’s richest and most successful clubs let it come to this? As with any popular uprising, the wounds are many.

“Clearly the aborted breakaway European Super League, coming hot on the heels of Project Big Picture, was the short-term trigger. But really the breach in trust has been years in the making.”

“I’ve never seen anything like that before but I’ve got to say I find it quite hard to understand how the police and authorities didn’t realise something of this nature was going to happen,” Crouch told the Daily Mail.

“Ask yourself this: were stewards ever going to try to stop those protesting? Of course they weren’t! Stewards are fans of the club and many will feel the same way about the Glazers as those who managed to get inside Old Trafford.

“They have aired their grievances and shown that the friction that was sparked by the European Super League plans is not a story that will be swept under the carpet. But will the Glazers be bothered? I seriously doubt it.

“One thing that we can never lose sight of is that these people – the Glazers, John Henry, Stan Kroenke – have no affiliation to the clubs they bought. They will never understand the depth of feeling their proposals have caused.”

10 former Man Utd players to speak out against the Glazers: Neville, Rio & more