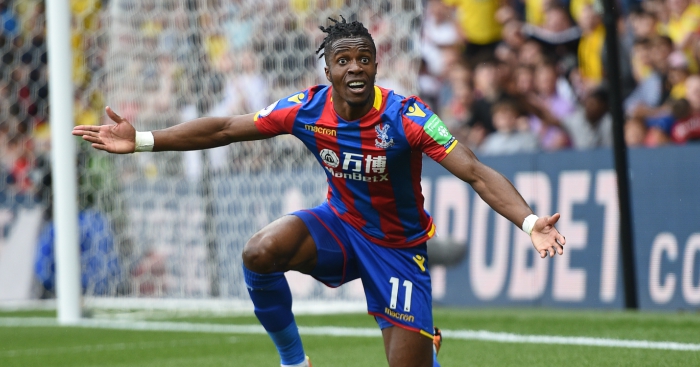 Beating friends and colleagues in Fantasy League is great. Whether you’ve got money riding on it or just pride, there’s something weirdly satisfying in finding the right 14 players to fit around Angel Rangel, seeing them perform well and then cheering on teams you hate because your Fantasy depends on it.

But have you ever considered the possibility of winning the entire thing? Of beating nearly six million other Fantasy League managers over the course of a season? Of scooping the grand prize, which contains goodies like Premier League match tickets, a fancy watch and a week’s holiday in…drum roll…Great Britain?

Probably not. It might be free to play, but six million? Those are EuroMillions odds. Forget it.

And yet, if you look a little closer, you’ll find that the grand prize isn’t the only thing up for grabs on Fantasy League. Far from it.

Scrape the barrel further and you’ll find some really fucking modest prizes — Fantasy League T-shirt, stress ball, pen, pad and key ring — for being in the top 20 managers of the week.

You’re never going to win the entire thing. That’s common sense. But what about that Fantasy League stress ball? Surely there’s a quick and easy way to procure that small trophy?

This is a record of my attempt to do so.

The first of these factors is especially important.

I need to aim for a week in which nobody is shooting particularly high — a week with no double fixtures, obviously, and ideally very few fixtures at all.

The best candidate seems to be Gameweek 35, the weekend of April 21, when there are only 12 teams playing. No Brighton, no Bournemouth, no Chelsea, no Huddersfield, no Leicester, no Manchester United, no Southampton, no Spurs.

For most Fantasy managers, weeks like this are a write-off, the main target being simply to field 11 players.

But that presents a golden opportunity: since a bunch of teams aren’t even playing, the average score is sure to be much lower than usual.

The bar is lowered, the stress ball within reach.

To try and ‘win’ Gameweek 35, I’ll be creating a new team from scratch using only players from the 12 clubs with fixtures.

This has the disadvantage of inflated prices — Mo Salah, for example, costs ‘£1.6m’ more than he did at the start of the game — but allows me to avoid picking anyone without a fixture. No Harry Kane, no Collin Quaner, just point-hungry players from Manchester City, Arsenal and the other active teams.

Importantly, it also means I can play a ‘chip’ in a Gameweek where most managers wouldn’t consider playing one.

It’s totally against the rules, I suppose, since my actual team has been in the gutter since August and you’re only allowed one team per person, but will the Sepp Blatter types at Fantasy League HQ notice? Will they take their eyes off their stress balls and notepads to spot a rogue account? Doubtful!

In decreasing order of likelihood, these are my goals for the week:

– Win Gameweek 35 (highly unlikely)
– Finish in the top 20, win a stress ball (improbable)
– Get a respectable score (necessary to justify this article)

Before continuing, I should point out that there’s one big obstacle in the way of my potential success: I’m quite shit at Fantasy League.

After winning a few local leagues against dormant accounts over the last few years, I’ve recently been exposed as a massive Salah-dodging idiot barely in the top 25 percent of managers.

That makes one of the most important parts of this exercise — picking a winning team — trickier than it probably should be.

Still, there isn’t much to choose from, and this is what I go for: 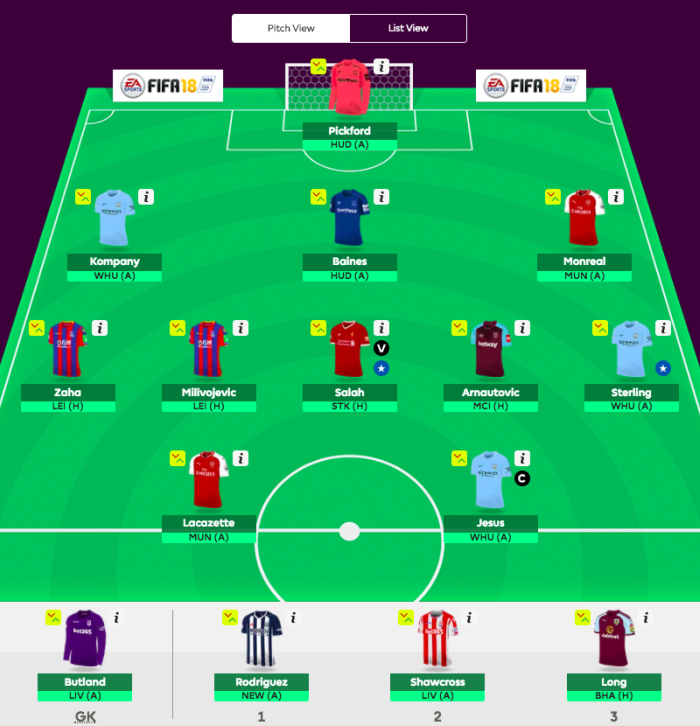 The workhorses on the bench don’t promise big points, and Salah won’t play 90 minutes, so I’m going to avoid the ‘Bench Boost’ chip and instead apply the ‘Triple Captain’ to our mate Gabriel Jesus. I think.

As the clock nears the transfer deadline, I could really use a stress ball.

West Brom v Liverpool. Most managers are captaining your man Salah, but with the Champions League around the corner, that doesn’t seem wise. He gets one goal, which is perfect.

Down in Watford, however, referee Chris Kavanagh is messing with the plan, refusing to give Wilfried Zaha any penalties and even booking him for diving.

With both Zaha and penalty taker Luka Milivojević begging for points in my midfield, this could prove critical. They end the match with five between them. Poor.

I finish Saturday with just 12 points, desperately far from the prize.

Come Sunday afternoon, I’ve got three boys in the Arsenal v West Ham match: Nacho Monreal, Alexandre Lacazette and Marko Arnautović. They do the team proud, getting four goals between them.

But it’s Man City v Swansea that matters most. The champions are surely going to put on a show before their trophy presentation, and I’m banking on a clean sheet from captain Kompany, something from Sterling and hopefully a lot from Jesus.

Kompany and Sterling do their thing, but Jesus is quiet. Until he absolutely shanks a penalty, that is, and I’m panicking like this guy:

Is Jesus getting points deducted for missing the pen

The missed pen / accidental assist combo results in a net gain of one point. Funny, but bad for my Triple Captaincy.

A late goal brings his total score up to seven, and I’m praying like this guy:

Can this goal makes Jesus a contender for bonus points

I end the weekend in 940th position.

Everton v Newcastle has 0-0 written all over it. I’m therefore reaching far into the Fantasy League past and future with the selections of Leighton Baines and Jordan Pickford, from whom I need a modest total of 30 points to usurp the current leader.

Everton play some ugly football for a clean sheet. Bonus for Baines. 14 points.

Come the final calculations, I finish Gameweek 35 with 92 points, ranking 102nd out of six million. 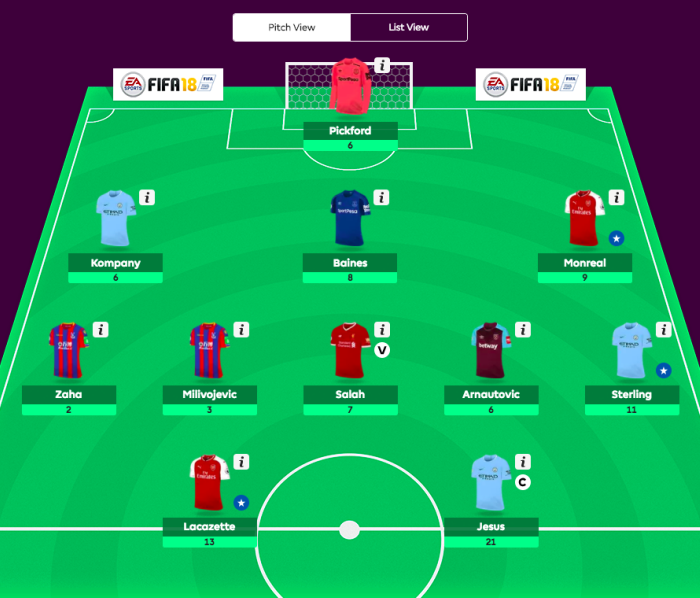 I have not won.

Failure is hard to take, but I was really quite close to achieving my goals. The highest-scoring manager of the week was way ahead with 111 points, but I’d have needed only 99 points — seven more — to crack that lucrative top 20. So thanks for that, Chris Kavanagh.

Still, I have to accept that the better managers won, fair and square.

By registering my one-off team so late in the day, I’m automatically entered into a mini league with other managers who signed up ahead of Gameweek 35. These week-specific leagues ostensibly allow latecomers to challenge other latecomers on an equal footing.

Despite my strong score, I didn’t finish very high up that mini league — 25th, to be exact. That means, of the 101 managers who performed better than me this week, 24 also signed up just last week.

And wait a minute, the Gameweek’s highest overall scorer, one ‘h>m basyouni’, is one of them! The Egypt-based Fantasy boss is going to win a copy of FIFA 18, a Nike football (an actual one, not a stress one) and some other junk, even though he or she is surely cheating just as much as I am.

But there’s more! It transpires that seven managers in the weekly top 20 only created their accounts this week, and many of them have highly suspicious team names: ’15’, ’56’, ‘9+’, ‘t’, ’00’. Those aren’t euphemistic puns on foreign club names; those are just numbers and letters.

One user, Ahmed Adel, doesn’t even have the decency to use a fake name for his hundreds of simultaneously submitted squads.

So, what, is there a whole network of Egyptian Fantasy League ‘managers’ churning out multitudes of teams every single week? How are they going through so many Hotmail confirmation procedures without getting fed up? What are they doing with all those stress balls? And most importantly, why didn’t I think of that tactic?

Fantasy League, it turns out, is a writhing snake pit of corruption and match-fixing. So next time you have a great week and wonder why you haven’t won a stress ball, look to Egypt, look to idea-shy football writers, look to a broken system that lacks the power to enforce its own rules.